END_OF_DOCUMENT_TOKEN_TO_BE_REPLACED
If you thought I was enjoying my time with Neverwinter as a whole, you would be right. I am enjoying my time with the game as a whole, and while there are bits and pieces which don’t totally sell me, my initial impressions have been positive. Heck, even my impressions from the last week or so of play have been mostly positive, with a lot of good experiences and a few which are…

Yeah, I could say “less good,” but I’m going to go with just plain “rage-inducing.”

Here’s the weird thing: At least one of the things which inspired a rage-spike from me was something I had been waiting for from the moment I started playing the game, and people who have read my work long enough probably know what that means. So join me as I find the item I dread more than any other in games by Cryptic, an item that appears in both of the other titles run by the studio that makes me start shuddering with rage every time I see it.

Let me start by saying that while I generally don’t like lockboxes, the simple idea of them doesn’t spark an inherent spike of malice in me. I don’t like them for the same reason I got tired of random card packs in Magic: the Gathering ages ago. I like to know what I’m getting and work toward a reward, and while getting something randomly nice is, well, nice, I have too much knowledge of my own luck to count that as a given. I expect to be unlucky, and the universe rarely disappoints.

Still, in many cases they work out all right. If your game sells a lockbox for a couple of dollars and the items can be relisted on the in-game auction block, I can move past it. There’s a reward I can work toward or one I can get lucky with, and so I can let it go.

That is not how lockboxes work in Cryptic’s games. No, in their games it’s always presented as a piece of loot, something you find out in the world… which you then must buy a key to open. And for reasons I can thankfully articulate, this makes me very angry.

This is not a reward. You set things up to make me feel as if I was getting a reward, and now you’re holding it hostage. “Boy, that lockbox might have some really cool stuff in it. Give us $5 to find out. No refunds if it turns out to be garbage.” I don’t know about how it factors into overall drop rates, and I don’t care because it is weak sauce. Whether or not it drops independently of real big rewards, it feels like a case where you get excited for something and then get that excitement snatched away at the cost of money.

Better yet, the dang thing just sits there taking up space, which is already not something you have a surfeit of. So it’s holding you hostage twice over. I hate these things so much it’s difficult to fully articulate. It manages to combine everything I hate about random lockboxes with some rather scuzzy parctices that just set my teeth on edge.

I expected this. I knew when I fired up Neverwinter I was going to run into this, because I did in Star Trek Online and I did in Champions Online and it’s sort of a whole thing. That doesn’t change the fact that I hate it, though.

Per the last vote, I also took part in one of the game’s Skirmish queues, which pitted me up against a large cluster of undead in the Blacklake District. here is where things get tricky for me, because while I enjoy instanced content with a group, I also have my own set of standards and I acknowledge that there are different standards to use. So I can understand yes, some people might really dig on the way this is tructured.

But… look, again, I can’t help comparing it to group content in Star Trek Online, which felt similarly disconnected and spam-heavy. This was not a queue of carefully coordinated action and precise mechanics, this was a bunch of people standing in a room taking shots at zombies until there were no more zombies to take shots at. It was, ultimately, less engaging than the single-player runs through various dungeons, already prone to having enemies which fade away under a handful of ability casts. 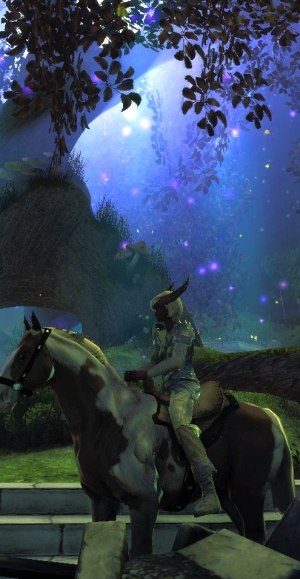 Yes, it’s low-level, and it’s not wholly indicative, and it’s not even something where it’s impossible to have fun with it. It’s still kind of a disjointed mess, just the same. It’s what I expect from the developer when it comes to group content.

That’s the odd thing I find about Cryptic as a whole; I rather like their games, but I find just as many elements of their games somewhat off-putting or downright rage-inducing. None of this stuff is surprising to me, but all of it cools my ardor significantly.

Beyond those bits of rage, I enjoyed what time I had left with the game; I picked up my first mount, I crawled through various bits and pieces of scenery, I killed Kobolds, all of the usual stuff. The bright side is that I’m never far from a portion of the game I do like, even when other parts of the game are causing my animosity to spike.

It’s just that this week I decided to focus a little more narrative time on those moments of rage rather than the minute-to-minute details of the story. It’s not all sunshine and light.

Now, my current level does mean that there’s at least one more style of instanced content I have not yet experienced, and it presents an interesting question as it’s something I haven’t really engaged with in prior Choose My adventure columns. There is PvP out there, and the to the best of my knowledge I can currently queue up for it. I’m a bit leery of doing so in a game so reliant upon twitch reflexes, but it ultimately isn’t up to me. It’s up to you, dear readers.

CMA: Should I go try out PvP?

Beyond that, it’s high time for me to continue shooting, fireballing, and otherwise weaving my way through everything the Scourge Warlock has to offer in the last week of this particular series. You can feel free to offer your feedback in the comments or via mail to eliot@massivelyop.com, and if there’s a game or two you’d like to see featured on the poll for the next round of games, don’t be shy about adding that in there as well. (We are open to suggestions, even if we don’t take all of them.)

Welcome to Choose My Adventure, the column in which you join Eliot each week as he journeys through mystical lands on fantastic adventures — and you get to decide his fate. You are probably better off not hearing him rant about group queues in STO for an extended period of time, though. It’s a lot of ranting but it doesn’t ever really go anywhere.

Every time a lockbox gets opened, the MMO universe cries a little and the game companies go cha-ching a little.

I hate Lock Boxes. I won’t spend a dime on them. They are the very worst kind of gambling as you pour in real money and get absolutely nothing of value even when you win! Yet we can’t have poker games because “gasp” we don’t want the children learning about gambling.

Don’t get me started..

This is why we do articles for you, Schlag.

A real classic there Schlag – I nearly spit Mountain Dew on my screen…damn you ;)

Never change Schlag, you create such on the spot awesome memes man. :)

Yupper, summed up my overall feeling about lockboxes and PWE with that whole rant on the lockboxes. Oh and Schlag’s meme is freaking awesome underneath my post.

Ok, this is funny, as CoT just did an update this morning discussing Lockboxes, and our refusal to have those in our game.

in Cryptic’s games lockbox is the real endgame. You need to think with them, think around them, think about them. That’s the price you have to pay not having to pay a game box, expansion box and a sub fee.
Also nothing in the lockboxes is bind-on-pickup. You must keep this in mind too.
Also you can farm cash shop currency in all of Cryptic’s game.
They are the fairest f2p games.

Are you getting paid by the word? Seven filler paragraphs complaining about lock boxes, a couple wordy paragraphs actually taking very generally and weakly about game content. All in all, not much really said of value. I’m done paying attention to CMA. Sounds like you are making no real effort at this column or with the game.

Do you think you’ll get to any of the “Campaigns” by the time you finish this column? As irritating as the lockboxes and upgrading systems are, the Campaign content is what ultimately made me nope out of this title forever.

Path of Exile releases the full patch notes, passive tree, and item filter information for Echoes of the Atlas

Skyforge previews its PvE content on Switch ahead of launch on...