END_OF_DOCUMENT_TOKEN_TO_BE_REPLACED
If you haven’t yet played the most recent Star Trek Online update on consoles, you might not be aware that you’re going to be doing a fair amount of work alongside Lukari explorer and pioneer Captain Kuumaarke. (There’s your minor spoiler for the day.) We had a chance to sit down and talk with Kipleigh Brown, the actress who voices Kuumaarke, about the experience of voicing the character and about working within the existing continuity as both a performer and a fan.

And make no mistake, Ms. Brown is a fan; she loves talking about doing her best not to fangirl out when being directed by LeVar Burton in her on-screen appearance on Enterprise and her overall enthusiasm for the franchise as a whole. For her, what got her really invested in the universe was during the original run of Star Trek: The Next Generation, when she was lucky enough to catch “The Measure of a Man” and become fascinated by the central premise of the episode.

This informs some of her portrayal of Captain Kuumaarke, insofar as Kuumaarke herself comes from a species that’s just taking its first steps into the wider galaxies. The Lukari have chosen not to explore and seek out the stars despite being a warp-capable civilization; Kuumaarke herself, then, represents something very new as an explorer. She sees the galaxy through new eyes, both the good and the bad, and the journey from the ideals to the reality of what live in the larger galaxy really means.

Through it all, however, it doesn’t temper her curiosity or her hope. As an actress, that’s one of the things that Ms. Brown finds most important about playing the character. Star Trek, as a franchise, is one she feels always has a fundamental sense of hope about it, right back to the original series and the hope that perhaps humanity doesn’t destroy itself in the Cold War. That we could head into space not as conquerors, but as explorers, searching and finding out more about everything that’s out there.

In many ways, Kuumaarke embodies that side of Star Trek. And the fact that Ms Brown admits with a laugh that she’d happily head off into deep space herself to explore, combined with a familiarity with the universe as a whole, makes portraying Kuumarke an easy role that she loves to fill.

It also means that she has, in various capacities, contributed to the universe across all of its many eras. She served as an actress on Enterprise and (obviously) in Star Trek Online, but she also plays Lt. Barbara Smith on the series Star Trek Continues, a fan-based production documenting the further adventures of the original Enterprise crew. There’s a definite sense of pride and lucky to be able to have taken part in so much of Star Trek history.

When asked if she plays STO herself, Ms. Brown laughed and said that the main thing keeping her from playing more is just that her home computer is an older Mac and thus doesn’t make it easy for her to play much. She has played, and part of her is worried about becoming too obsessed with the game if she had constant access. (“It would rival my real life,” she joked.) 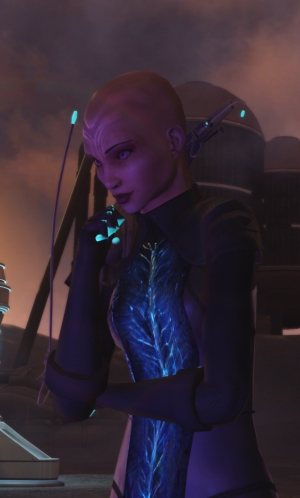 As the de facto face of her species, Kuumaarke is partly responsible for creating the overall impression of the Lukari in the minds of players. Ms. Brown relates that part of the quest to make this species seem distinct was trying a unique accent, and the first versions of the scripts she had featured lots of extended vowels and rolling Rs. All well and good, but she remembers that as she was working through the phonetics, it wound up sounding fairly close to the traditional “vampire” accent.

Those takes were not the ones that Cryptic ended up using in the final episode, going with a more mundane British accent (which Ms. Brown admits she modeled after her mother’s accent). It still does help that the character sounds different than she does, however.

While there are obvious differences between handling voice acting and real-world acting, Ms. Brown sees them both as very similar in their essential nature; they both involve stepping into a character’s skin and seeing how that character would feel. She wonders what it would be like to be human and in that same situation, to be facing an apocalypse and be faced with the question of what can be done. It’s a question of recaptruing that shock, seeing things which aren’t new as a fan but are new to the character.

It is, however, a little more difficult to stand still while doing a voice acting session. For that matter, it’s less organic to be acting alongside other actors who aren’t there, such as in Kuumaarke’s more recent episodes where she’s interacting with Tony Todd’s General Rodek. You can’t play off of a real person in the same way, and so you wind up reacting to an imaginary reaction and filling in the blanks with the director and writer.

Mostly, however, that changes the preparation more than anything. Ms. Brown spends time practicing her lines with several different possible reactions, different ways that might match what’s supposed to be occurring on the screen. Since the script is rarely delivered in shooting order anyhow, it’s not so different, but it means that the matter of filling in the blanks is a more organic process.

The same thing happens during scenes where Kuumaarke is interacting with player characters, which amount to Ms. Brown essentially running a one-woman show. Her goal is to really give the players a feel that they’re interacting, even though she can’t say the player’s name (voice recording sessions would never end if that were the case). She’s pleased to have positive reactions about her portrayal from fans, people who feel her character seems organic even though its’ technically a one-way interaction.

So how long will Kuumaarke be involved in the story? She doesn’t know; she’s not one of the writers. (She did, however, write the upcoming July 27th episode of Star Trek Continues, a project she was intensely excited about.) But if it were up to her, she’d be happy to keep doing the character for the rest of her life. She likes playing Kuumaarke, likes the experience of working with other Star Trek fans, and likes contributing that passion to the story. She’ll be there as long as she can be.

We’d like to thank Kipleigh Brown for taking the time to answer our questions about her time with the game and as an actress.

Please. This d-lister had one role in one episode of ST:E and lists herself as a “co-star” on her site. ROFLMAO

Aww, poor baby. Please point on the doll where exactly I hurt your butt. She’s lucky to count as a prop.

No thanks. Unlike you, I’m not interested in other dudes’ asses.

And talk about butthurt. You’re the guy who’s unusually (and suspiciously) angry about an actress in a Star Trek episode. Get a life. Meet a girl. Lose your virginity, kid. There’s a whole world out there.

I liked the Kuumaarke character at first, but she’s basically become a Mary Sue. Solves all the problems in the universe with a wave of her protomatter wand

so she has a mac and can’t play the game… hello Cryptic? are you there? please bring back mac client so she can play! ty!

be cheaper to buy her a pc lol

Couldn’t they just buy her a copy of Windows? I was under the impression these days that Macs were just PCs running Mac OS

What, does she get paid in peanuts? She can buy her own shit.

Unless STO has a new 64 bit engine, that would be a waste, as the new Apple OS will not run ANY 32 bit programs. Finally, Apple is doing something right while WIndows keeps catering to the decrepit old toasters.

It’s interesting to hear VO actor’s perspective on player interaction, and flow of conversation. This was insightful.

Thank you for this, Eliot! Great to hear her take on things; I appreciate it!