END_OF_DOCUMENT_TOKEN_TO_BE_REPLACED
Despite the recent release of Path of Exile’s Fall of Oriath’s recent beta release, Grinding Gear Games sent Technical Director Jonathan Rogers out to E3 2017 to chat with press about the game’s incoming expansion. If you’re looking for some sweet, sweet data-crunching from the test server, you’ll be disappointed, as Rogers mentions the team shipped him off before he could see how the freshly launched test was going, but he still brought some interesting information. 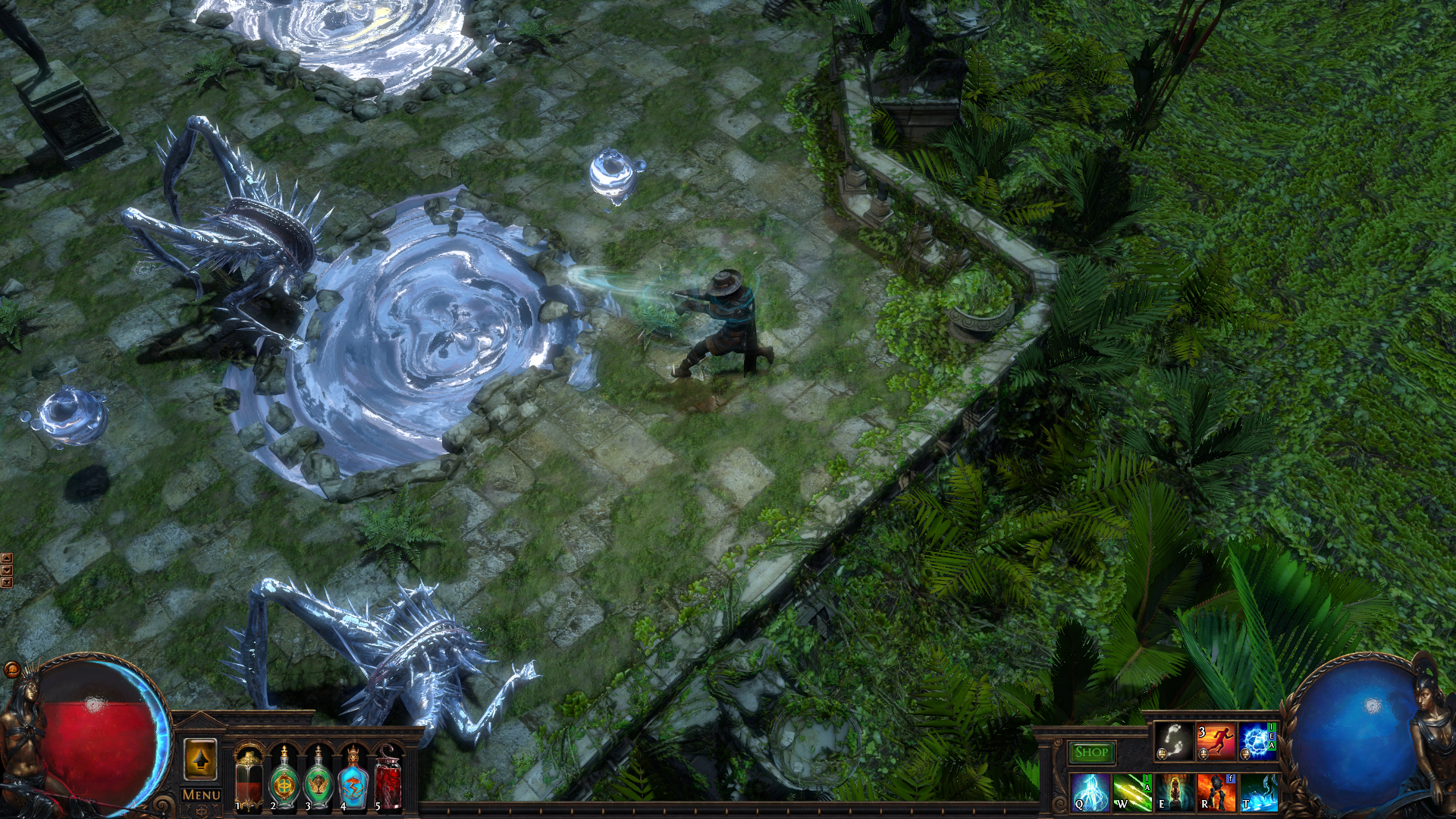 Preparing for a fresh start

For those of you who caught MJ’s recent stream, you may recall that Fall of Oriath has gotten a new character creation screen. While the new one is fitting for the setting, the original voice acting that MJ and I miss from the launch character creation screen is going to be recycled for a cutscene taking place once you’ve finished making your avatar. Grinding Gear wanted to do something fresh for Oriath, but it also liked the original experience as well.

Beta testers may recall that soon after beta started, there were two rollbacks of the microtransaction system. The rollback happened because of an issue with the migration system, but GGG had issues reproducing it locally. The devs thought they solved it which was why they tried rolling out the system again, but just as before, they couldn’t reproduce the issue themselves, which is why it slipped through again, and it’s disappointing for GGG too. Hopefully by the time you read this, the issue will have been solved!

Those preparing to enter Oriath probably spent a good deal of time with the recent (and extended) Legacy Challenge League. Or at least, I hope you did! Rogers admits that it may have been “too good,” so it’s not something players should expect to see again anytime soon. There’s a chance it might eventually return for 4.0, but that’s a long way away.

Finally, let’s be honest: There are going to be lots of spoilers during beta, especially because there’s no NDA. Don’t worry, story fans, as one reason chapters 9 and 10 haven’t been released are specifically to help make sure people have a chance to see and experience Oriath’s finale themselves. 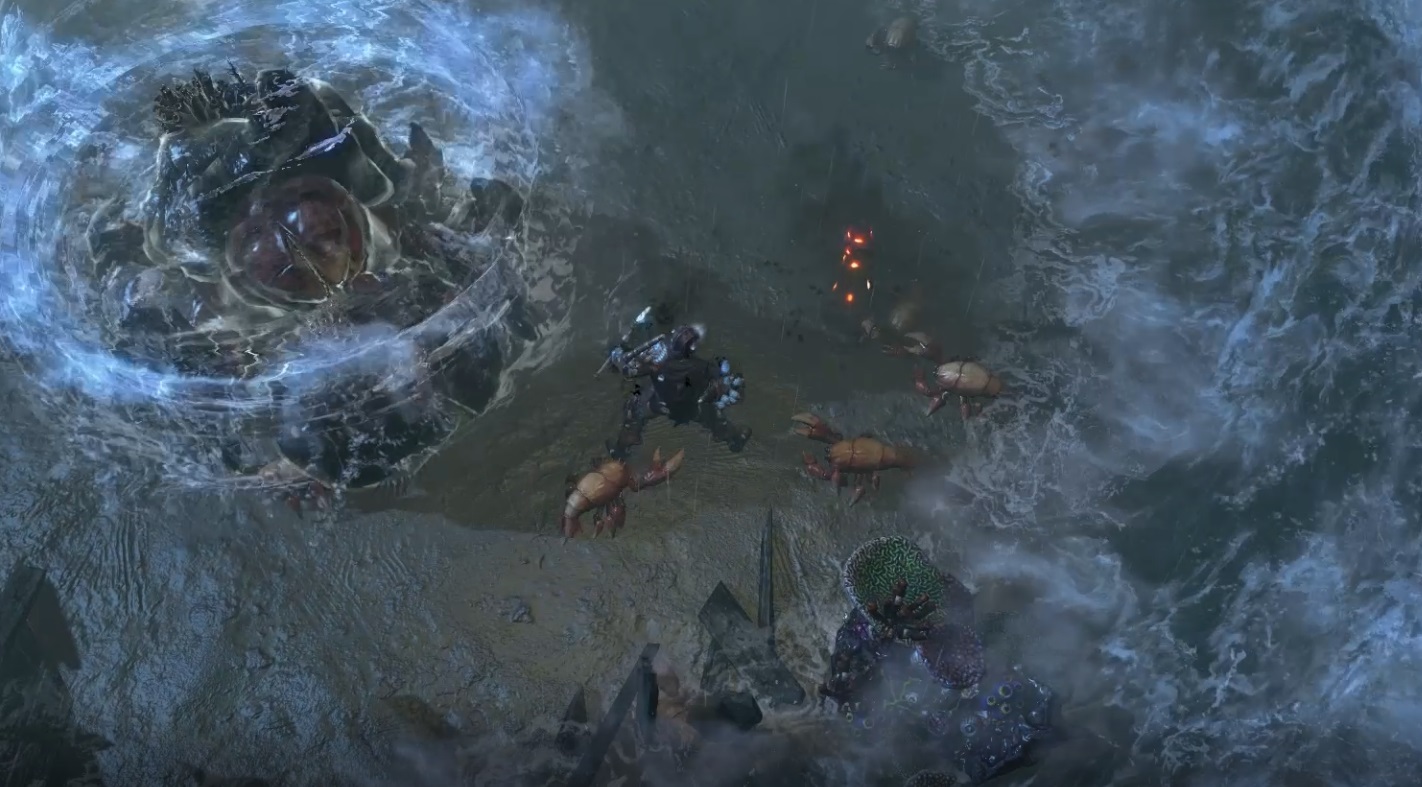 By now you’ve all seen the familiar face that’s returning in Oriath. Doedre the Vile’s battle has Doedre essentially poisoning you with one of three debuffs. You can use her cauldron to wash them off, but she’ll then absorb and reverse the curse, so an attack debuff on you becomes an attack buff on her. It sounds interesting, and as Rogers demonstrated, it also looks tough — to the point that he was caught off guard by his own game. He was adapting to characters he’d never played before and noticed bugs that haven’t been reported.

With so many pirate games at E3 2017, I have to admit that my favorite demoed boss was POE’s Brine King and its mermaid… well, I’ll let you find out yourselves, but the relationship between the two of them is something I doubt most people will guess. I couldn’t even guess it at first, and I was watching it! As you’d expect, water’s involved, with tides rising and falling, making your available space to move limited. It’s not earth-shatteringly innovative, but there’s enough personality that it makes me hungry for crab, though that could have been my E3 diet of nuts and berries.

At this point, Roger talks about the powers we steal from gods. There’s one major slot and two minor slots, and it’s supposed to be fairly obvious optimal choices for using gods’ powers, like wanting ice protection against a boss that uses ice magic. As in most of the game, you’re free to customize and use abilities as you wish, but GGG is trying to make certain choices more obviously “right.”

Finally, we saw a preview for the Solaris and Lunaris gods. Obviously there’s a war between the factions night and day because there always is, with followers from each side attacking each other, though they’ll attack you too. This celestial civil war becomes a theme for the area, including the boss fight. When you awaken them, their immediate thought is to fight each other at first, but even if you don’t choose to jump in, they’ll will eventually notice you. It’s very mythological, as one celestial god will be in the sky shooting things down at you while the other is groundbound and battling you.

I haven’t played Path of Exile in a while, but the game’s tone and lore are what always make me look into it, and Fall of Oriath seems to be playing to GGG’s strengths in those departments. 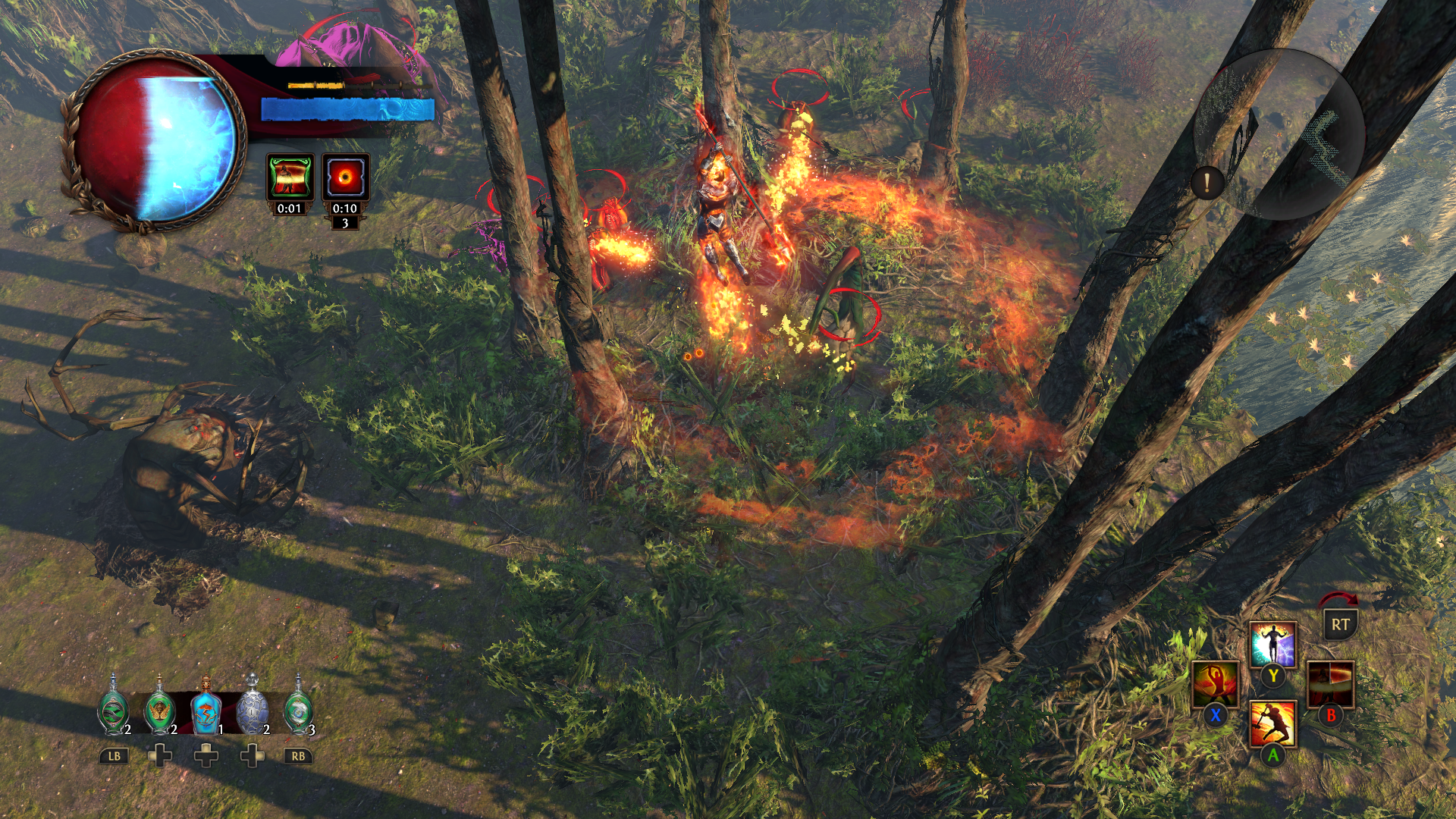 As you may recall, POE is coming to Xbox One. One advantage of launching on a different platform associated with Microsoft is that Xbox fans seem to have a big PC gaming crowd. Many knew of the title and were happy for its release announcement. Xbox fansites have apparently “come out of the woodworks” to cover the game’s pre-beta news since it was announced. Being free to play and seen as mostly selling cosmetics really seems to attract the Xbox fans.

However, GGG knows there are some cultural differences between PC and console gamers. For example, PC gamers can obviously just tab out and google whatever they want to look but, but that’s more difficult for a console player, so the team is trying to include ways for people to look up information in-game without having to run over to their PC or switch on their mobile phone.

All consoles aren’t created equally, though, so PS4 owners, don’t get excited yet, as Grinding Gears mentions it’s been easier to work with Microsoft, which (obviously) has more experience with PC developers because it is one itself. It’s not out of the question, but GGG is trying to focus on the green console first.

The game’s also really looking strong in China. It ranks as the second-most anticipated title on one of the larger Chinese gaming websites, 17173. Partnering with Tencent really helps, since Rogers jokes that “looking at [Tencent’s] marketing budget, man, that’s more than [Grinding Gear] spends on game development.”

Censorship is obviously an issue, though, especially with all the undead. GGG is trying to stay true to the nature of the game, so despite the Chinese market, yeah, there’s going to be a river of blood you’ll come across. However, Chinese undead are replaced by a variety of monsters, such as creatures with crystals sticking out of them, something Grinding Gear is turning into a basic mob for all players (though not necessarily replacing undead for non-Chinese players). In fact, you’ll probably see a greater spread of creature diversity because of this, as the team want to focus not just on localizing but on expanding creature diversity in general.

Oriath from a visual, narrative, and gameplay perspective looks fun so far. There are some really odd bugs the team has to battle on the way to release, but with the game entering new markets and a new international partner, things are looking up Grinding Gear Games and Path of Exile.