I sat down with Elite Dangerous Senior Designer Sandy Sammarco again at E3 2017, and while the information I’ve got in terms of game info may be a bit old hat for hardcore Elite players, I want to be clear on something: MMO players should take note of how Frontier is doing community events. Even if you aren’t interested in the game itself, the design strategies and execution are things that are reminding this jaded MMO-enthusiast about what got me into the MMO genre in the first place. I don’t really do space sims, and haven’t touched my VR for months (though I could probably hop on normal PC or PS4 versions), but my time with Sammarco has gotten me closer to hitting the “buy” button on the game.

Elite’s mostly been about humans, in the old series and new. Alien interaction does occur, but not in space opera ways. When Elite Dangerous launched, it was mostly about space and exploration. It was about simulation and trading. People were comparing it to Star Citizen on a less grand scale, something I was guilty of myself.

But Sammarco reminded me that Frontier’s been dropping hints about its current storyline for a while now. Players started finding mysterious recordings with Morse Code about two years ago. Without any inherent value in combat or crafting, people were just collecting and selling them because, as Sammarco puts it, “That’s what humans do.” They found something, found differences in them and rarities, and assigned value. To some, they seemed useless, maybe linked with occurrences of malfunctioning at spaceports they were being sold in.

About a year later, strange structures nicknamed “barnacles” were found. Players found they could harvest them for a new resource but again had no idea what they did and started to collect and trade them. This isn’t just space exploration but real people in cyberspace doing things that, historically speaking, humans do when they explore new places.

All of this was separate from the alien encounters people were experiencing: the Thargoids, lately in the news but not all like their counterparts in the old games. The new ones in the “flower-shaped” spacecraft seem less violent than they’re historically known to be (though there’s reason for that), but as Sammarco notes, when two cultures meet, it’s usually bad for one of them. What’s important to understand that their presentation in game is very much “not human,” in a way ants may understand humans as “not ants.”

YouTuber Deja Drew’s experience is cinematically cool when you realize it’s raw gameplay, but for those unfamiliar with the game, it’s even weirder. Imagine if, while you were fighting ogres or kobolds or some boring mob in World of Warcraft, a cloaked figure suddenly appeared and froze both you and the mobs. It starts checking you out, but every time you move your mouse, you get an error saying, “A spell prevents you from moving your cursor.” This is something that fundamentally shouldn’t happen in the game. It’s not just interesting to see but introduces you to the idea that the player character is completely outclassed by… something. It’s a kind of immersion we don’t get to report on often in the MMO-sphere, and Elite isn’t billed as a true MMORPG.

But there are other ways Frontier’s been building things up. Remember, Elite can be played as a single-player game too. Grouping is a hot topic in our genre despite how much MMO content caters to soloers. Frontier tackles this with community goals, challenges that pop up that people can participate in. Even mobile games are taking advantage of this, which I’ve noted in my POGO complaints that Nintendo, of all companies, has taken advantage of this while veteran app developers haven’t.

Part of this is, as Sammarco reminds us, players organize themselves when given a reasonable challenge and motivation. Players being players, they don’t all need constant carrots dangling in front of them or sticks to motivate them. This won’t work with everyone, as it’s a discussion that comes up in education as well that, for all the optimism involved, sometimes falls flat for those who aren’t engaged in the discovery process on a basic intellectual situation.

However, it is entertaining, even from the outside. Everything’s been connected so far, even if players didn’t notice these connection. It’s been a slow build up, similar to the Asheron’s Call player events, with The Shard of the Herald being the most famous example. In fact, the unfolding story gets me to ask if Sammarco played the game, and he confirms this, but only for a short amount of time. However, he does remember a bit of Turbine’s epic event, namely the big bad. Like AC, Frontier’s seeing that its slow build over time is paying off. Even BBC got caught up in the Thargoid excitement, making Elite feel even more culturally relevant. It still seems overwhelmingly technical in terms of raw gameplay, but so do (e)sports, and people still can enjoy watching those with playing them. 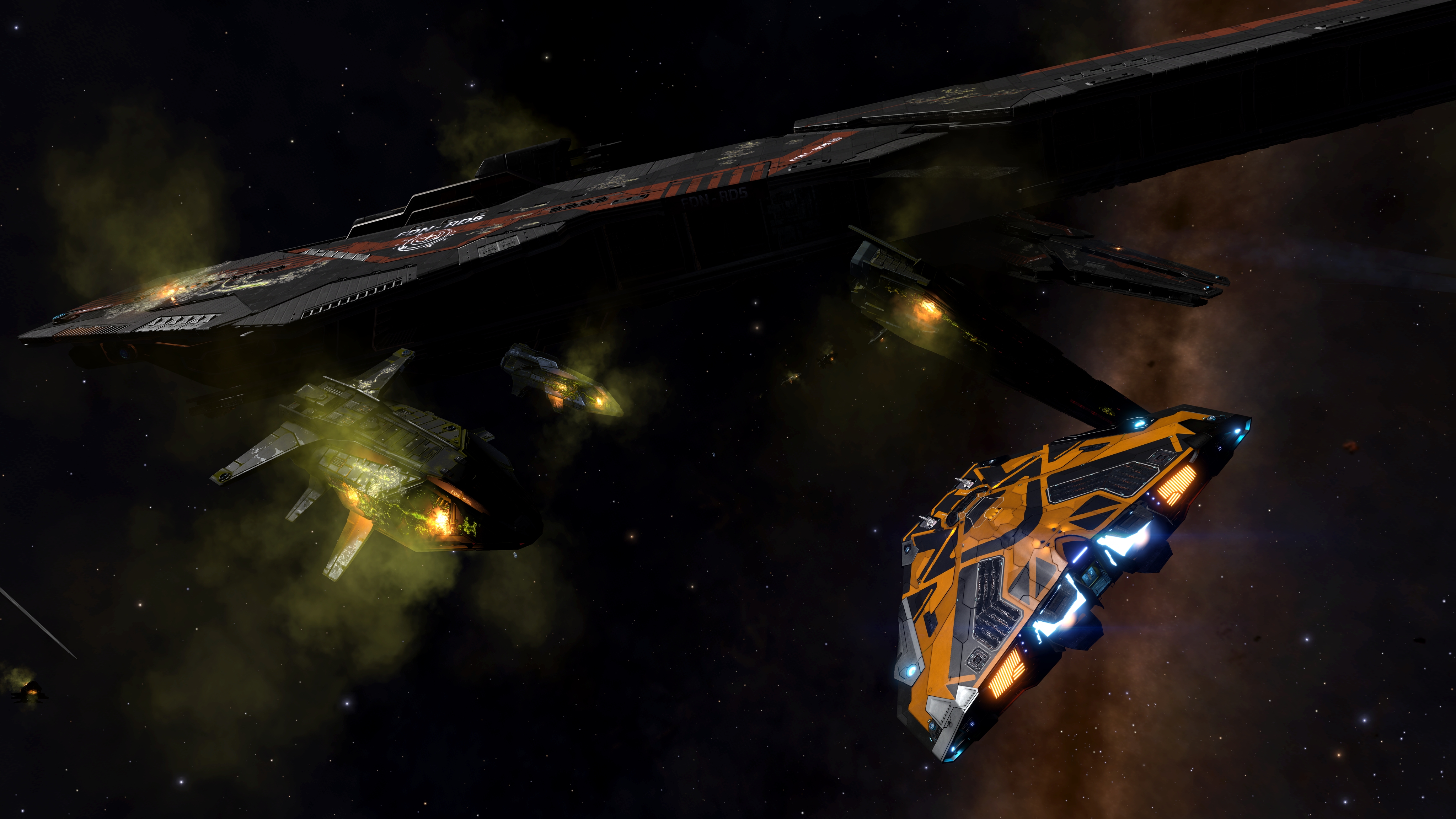 With Elite making headlines on a respectable non-gaming mass media site, it feels like the game is starting to see more comparisons to EVE Online, that other space game that’s hard to play but fun to read about. This is becoming more apparent after the game’s recent Salome event that resulted in heavy-handed communities trying to keep people out, betrayal, and Harry Potter becoming an assassin.

Sammarco laughs when I bring this up. “In some ways, that was great. It was a pure community event. We didn’t have to help out hardly at all… It was by members of the community for members of the community.” In fact, the devs are happy with the EVE comparison since they note that there’s plenty of space in space for competition. Frontier is pleased with the event’s results believes it can learn some things about it.

For example, the team’s looking at a karma system, not to prevent certain actions but add consequences. Sammarco didn’t mention any specifics, but focused on one of the results players may not consider when developers make these systems: They also give devs data points to track for social purposes. Elite’s not supposed to be safe, but knowing what players do helps Frontier make a better game.

Part of this has to do with having a certain amount of realism. Obviously the way the story’s been unfolding takes advantage of certain aspects of human nature, though I’d wager they’re probably more common among Elite’s target audience than, say, tile matching gamers. Consider the aliens: Frontier worked to make Thargoids alien, different, while respecting science, and to an extent, history, through gameplay. Sammarco strongly hinted at new content, noting that players have built up well, but their current equipment and ships are by and for humans, which might not prepare them for what’s next. Sounds ominous, right?

Update 2.4 is the start of something new. Sammarco verified both of the aliens players will be seeing are Thargoids, but suggested that there may be differences. Going out on a limb- one kind is aggressive, the other kind, maybe less so, and players may need to fight at least one side. Since their technology is alien in every sense of the word, the technology that’s been failing against them doesn’t look like it’ll be good enough. It’s like wearing water-elemental battle gear for a year and suddenly having content that focuses on lightning elementals, so there’s a solid chance players may need to build up their arsenals with the new tech when exploring this new area of the game.

Depending on how Frontier pulls this off, it’s an innovative idea. MMOs in particular are susceptible to power creep. Having multiple suits of armor in MMOs may not have been fun in past MMOs, but if content grows laterally instead of vertically, and innovates within those separate spheres, it could prove to be not only acceptable but fun. As the game’s on multiple platforms now with multiple communites, Elite’s looking like a good model to watch, both in terms of game development strategies and community interaction.

As Sammarco continually stresses, community is really important, and as an Elite outsider, I agree. I get a little excited about the game just by reading it. It’s very much like EVE, except it feels more PvE from the outside, even if there are some big PvP events. So much is linked to trade and decoding. Their use of real world inspirations can give players a “common language,” where real-world skills can help build on the fantasy (or sci-fi), giving value not just to hardcore lore fiends but to fellow players with diverse interests and skill sets.

It’s games like Elite that remind me why it’s so important for MMO sites to not just cover pure MMOs. The genre has warped and expanded around us. The definition of community is harder to pin down. Solo players and groups of people can add something together that affects everyone when there’s a smart developer behind the scenes trying to guide social play. I might not push the buy button for Elite, but at this point, it’s the space sim I think I’ll be watching the most.