The other day when I made a rare venture out of my E3 coverage den, my slightly younger brother asked, “Hey, did you hear about a game called Fortnite?”

Now, my brother doesn’t explore gaming like he used to. His MMO days are behind him. He wasn’t even aware of Super Mario Odyssey, so his asking about Fortnite was far from expected, especially since I’d learned something I think a lot of MassivelyOP readers will want to hear: The game is sounding a lot like Crowfall for PvE zombie fans.

So yeah, li’l bro, I heard about Fortnite. I even sat down with Fortnite’s Executive Producer Zak Phelps from Epic Games and talked to him during E3 2017 about “monsters,” survival games, and getting PvE fans in there.

When I went in to talk about the game with Phelps, I’d already seen the above trailer. I’d remembered the old previews and figured the game was now just going to be a typical lobby tower defense title. I figured it could be interesting, but I didn’t think I’d get as excited as I did. However, access to Phelps may have been the better way to go knowing how picky I am about good demos.

While talking to Phelps, there were certain things about Fortnite that instantly reminded me of Crowfall, a game I really like hearing about, but my little alpha time makes me feel it’s not as complete yet as I’d like it. However, that Early Access for $70 deal puts Crowfall into a price range that indicates a fan needs to be invested in the game to want in, not just be someone looking to casually pick up a new title. When Phelps said that Fortnite is being “released” July 25th, 2017 (July 21 for headstart), I reminded him that they were calling this is all Early Access, with the actual release coming 2018. Not only that, but Epic would be switching the payment model from buy-to-play to free-to-play with (I love the honesty) Loot Piñatas.

This seemed like a bad idea for a lobby game that really doesn’t sound like it’s innovating much, especially from seeing the trailer, right? But then we got talking. It’s still got the lobby matchmaking system, but like Crowfall, the world/match map is procedurally generated. Rounds are 15-30 minutes, but you bring some supplies and schematics with you into the lobby, and you bring some of them out, much as in Crowfall. You can craft gear and give it to your friends, but it has durability — it’ll break, and it’ll need to be replaced, also as in Crowfall. Each player also has a persistent “outpost,” a place they can build however they want, not just as housing, but for a functional purpose, again, like Crowfall. You’re also unlocking more characters and abilities through basic gameplay, slightly similar to Crowfall but without the awesome necromancy stuff. Hey, no one’s perfect.

Fortnite’s matches are shorter and more goal-oriented though. There are no guilds. There’s no direct PvP even on the horizon. “We know that players want co-op games where they can go play with their friends,” Phelps said. “There’s a lot of people out there that aren’t about killing other people.”

And instantly I think, “This is for Massively OP’s PvE sandbox fans.” 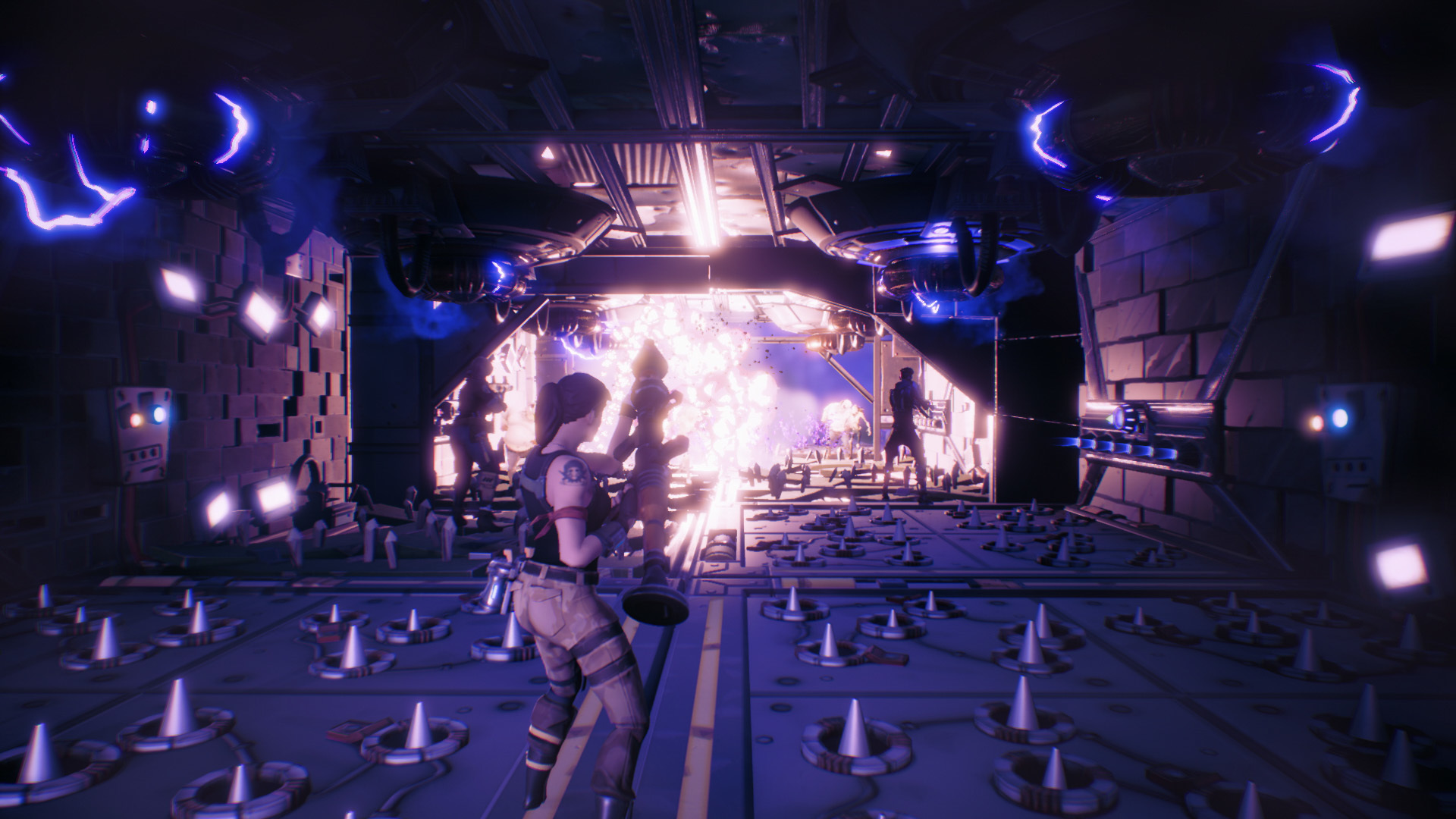 The basic idea behind Fortnite is that you’re a survivor. There are various classes with specialties (like building, setting traps, melee combat), but your main focus is to make and prepare a base before “the storm” comes and attracts monsters who are going to look for weaknesses in your base design and try to eat your brains.

If I really had to dumb it down, I’d say Fortnite is zombie survival you can bring your kids to. It looks and sounds accessible in both gameplay mechanics and visuals. You can see from the style that the team’s goal was to make a “playable Pixar” type game. It was built on idea of building stuff like trees houses as a kid, but to defend against “monsters” (they all look like zombies, but “monsters” is the term Epic and Phelps keep using).

Let me be clear about three things though:

No direct PvP doesn’t mean no competition. For competitive players, in about two months, you’ll see “Block Party” mode. It’s event-based, but for a certain amount of time, the mode will let you put you in a staging area where you’ll have access to some supplies and time to build a fort schematic to bring with you into battle. After that, you’ll be dropped in with three other players to see how fast you can complete the level. Everyone will have access to the same supplies, and again, you’re not killing each other for or with that 2×4. This isn’t as revolutionary as level scaling content, just basic game design choices that aren’t being used enough.

While the game sounds like a tower defense game, it’s a bit different. There aren’t preset AI paths. Oh, you’ll notice AI patterns and try to counter them, but the AI changes and even learns, and because of the procedurally generated maps, you can’t make an “ultimate” fort layout and win every game that way. You’ll need to adapt.

And this is where friends come in. As Phelps says, “It’s not about finding cans of beans to live.” It’s about “going into the world,” exploring, “finding what you need” and living off of that.”  As each match is team based, losing someone on your team hurts all of you. Every class has its own strength, but just because you’re a great trap builder doesn’t mean you won’t need a long-range soldier at your back in the event that monsters notice you left a hole in your backdoor defenses.

The game doesn’t have trading of key items like schematics, characters, or passive abilities, but supplies like weapons and armor can be given. Durability means there’s always a reason to find good crafters, and good crafters will want to be with good fighters to make sure they get a steady stream of supplies. It’s a pretty simple economic structure but feels light years ahead of the crafting systems I still see and hear about in a lot of true MMOs. Survival games often have these, but they’re rarely appealing to me in the long run for multiple reasons, like how servers are player-run and wipe frequently. Epic plans on hosting the servers itself and doesn’t plan to wipe player progress during Early Access. This means that, despite being a lobby game, there are reasons to make friends and team up with others. 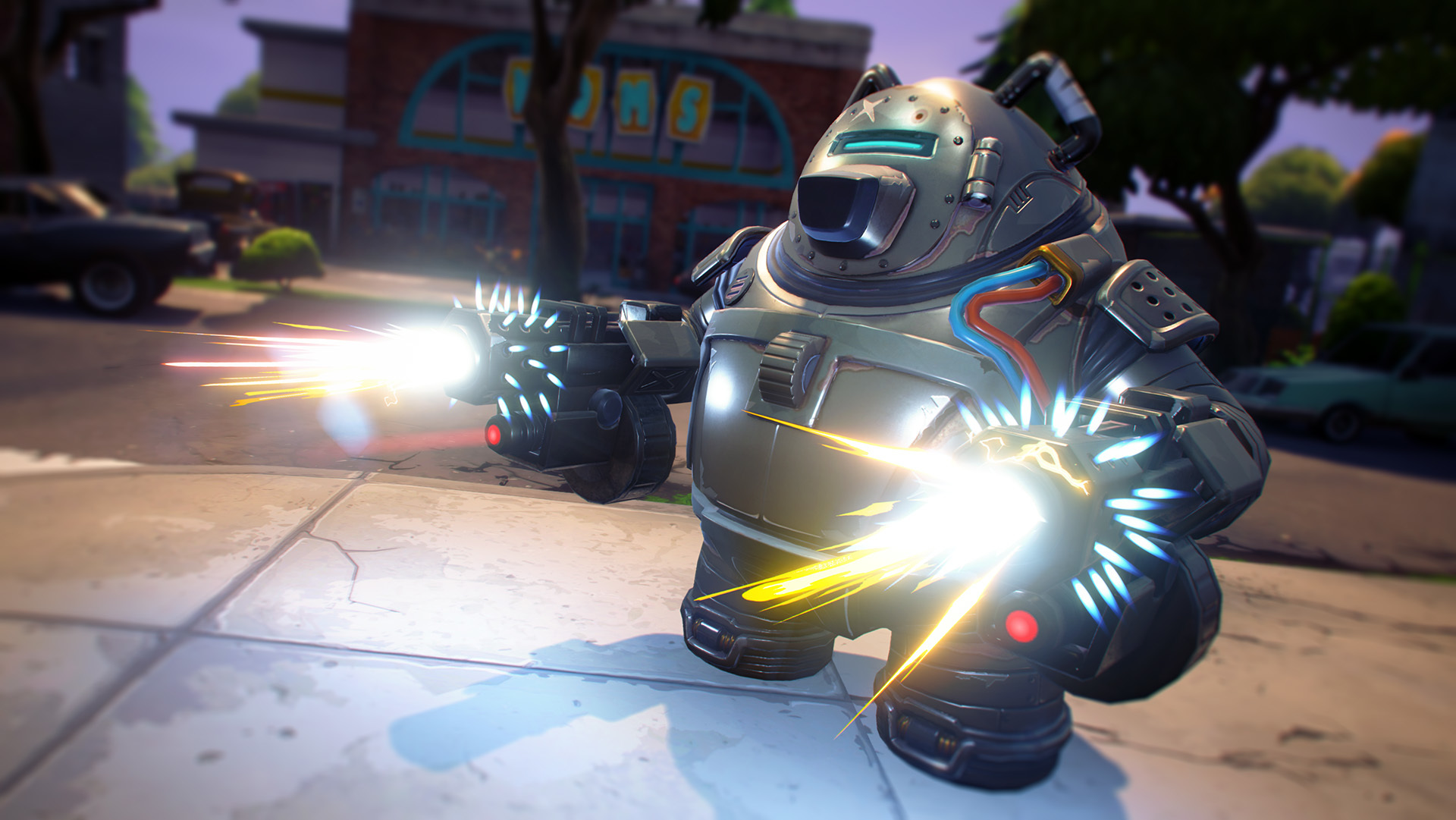 Preparing for a fight

Phelps notes that Fortnite’s been under construction for about six years now. Epic’s finally got the game moving in the direction they want, even if it does seem a bit troubling for someone Early-Access-leery like me, and even more so when a game plans to change its business model to drastically.

Lockboxes and the potential for buy-to-win is something that troubles me, at least as much for their gameplay indications as for their ability to exist in a gray zone world governments seem to want to clean up. Phelps says he’s seen free-to-play (or at this point, buy to play) players be more successful than those purchasing the Loot Piñatas (which we’re told give “card packs,” which in turn grant heroes, passive abilities, and schematics), but any time players can buy something that increases stats, it affects gameplay. The piñatas won’t be the only way to get items in the future, as there may be quests and so forth later on. For now, things may be “pay-to-accelerate” since you can unlock everything, but obviously paying makes it faster.

That being said, the game’s also PvE. Part of the fun sounds like it’s earning those boxes and grinding to find cool treasure. If Block Parties do much more than simply grant more loot, like powerful characters or abilities, I’ll be concerned, but we’ll have to wait until more people are in the game to find out how this plays out, and possibly soon. Phelps says a lot of the current players want a way to get their friends into the game, and there are a few platforms available for that (sadly, without cross play): PC, Mac, Xbox One (X), and PS4. When asked about the Nintendo Switch though, Phelps coyly says, “Ah, now that’s a great question. That’d be amazing, wouldn’t it?” I had to press him for an answer, but all I could get was there was no official response.

While the game may seem like like a pretty version of Minecraft or a new Landmark in a lobby (RIP), Fortnite’s strength is its speed: You can get in, build something, and get out fast. It’s not supposed to take you days for something that’s going to be destroyed in mere moments, and you have 10 or more missions at the moment to play around in before considering The Outpost, your persistent area.

Your area lets you build whatever you want within a small, protected bubble. By choosing to let down your shield, you welcome in hordes of monsters as a kind of challenge mode. Defeat the monsters and your bubble upgrades, giving you more building space, while losing just means you’ll have to try again. It’s not just cool to have your own space, but it’s also a kind of tutorial. You learn how to deal with certain sized terrains, supplies, and limitations, solo if you want.

The features the game supposedly has now makes it seem much more interesting than the cute trailer shown. I really feel like this is a game MassivelyOP building fans may want to watch.