I’m a kart racer. Oh sure, I enjoyed Cruisin’ USA and San Fransisco Rush as a kid, and of course I played Gran Turismo a little, but in general, I prefer kart racing games. They’re easier for non-gamers to get into when played on a console and often have mechanics that make them games more forgiving. I can see the appeal of realistic racing games, though. I’m no good at them, but they can be fun.

Even when I first demoed the original The Crew, I felt this way. I didn’t play the game at release, nor have I played any non-kart, non-arcade racers, but I respected it for what it was: a racing game with an MMO lean. However, this year, I feel like I could handle my car better in The Crew 2, which alone made me feel a bit better about the genre, but the addition of both boats and planes actually made me like the game.

Call it a comeback

For those who don’t remember, the original Crew game is a racing MMO. It even says so on its Steam page. That’s always stood out to me. But it wasn’t just about racing. You had the ability to drive across America in the world, not totally realistically, but it seemed familiar enough from my childhood memories of car trips. For me, though, it was about the boss fights, which I was horrible at, but still enjoyed: Four players would do their best to smash up a “boss” car in a free roam level. Think of it like a Cops car chase simulator where you have to box in the bad guy. Again, I’m terrible at these games and showed Ubisoft staff that no one can wreck my car as good as me, but I still had fun and could see the appeal.

The Crew 2 is similar, but not the same. It introduces a non-linear storyline the player can experience in whatever order she wants, starting and stopping each whenever she feels like it. I didn’t see much, but it seemed reality-based, with the Los Angeles plot being based on “turning legit,” a bit of a trope, but especially after having lived abroad and trying to readapt to life in Southerm California, it still rings true. These aren’t just for narrative purposes; each region’s local crew is also how you get introductory vehicles.

While the original Crew showed me that the racing genre has the potential to be so much more than it currently is within certain racing series, I admit I wasn’t exactly looking forward to it. I was the weakest member of my team on the original’s racing demo, and that was even with most of my team abandoning me mid-race and having to be replaced by Ubisoft’s demo staff. We’d won, but I suspect that the other team, like myself, may have also been made up of racing newbies. While my demo attendant for The Crew 2 wasn’t aware of any change in the game’s controls, the addition of new vehicles doesn’t just bring in new gameplay, but new controls. When I got to choose my terrain for racing (land, sea, or air), I saw that I was picking not just a boat or a plane but several models similar to how racing games treat their cars. I may not be a car racer, but in one of my final demos, I’d been piloting a few ships this E3, so I was admittedly excited by this. 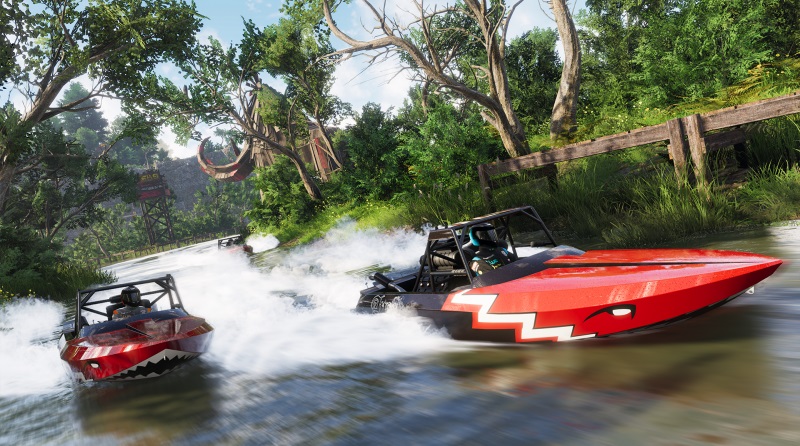 By land, sea, and air

Apart from cars racing across the American-styled “Motornation” setting, twisting the American landscape to add in ramps and twists that bring back my San Francisco Rush days without loops or pitfalls, The Crew 2 also has various kinds of boats, dirt bikes, and even planes. As in the original game, you can still see your friends racing from the game’s overworld map. However, having land and sea available adds new possibilities. Your friend could be racing on the Los Vegas strip while you fly on overhead, maybe sending out smoke signals above areas with dangerous curves.

It gets even more fun in the free range mode, not just because you don’t have to worry about driving with traffic but because the game allows you to seamlessly shift between land, sea, and air. If you’re racing a friend for fun next to a river, and you’re losing, without stopping or needing a loading screen you can change into a plane and just fly over the track. Maybe she’s a better pilot than you, though, so once she gives chase, you fly over the river (boats generally don’t move well on land) and turn into a motorboat and boost under a bridge, shifting your makeshift race into a game of tag. Free roam feels like playing with toy vehicles but still lets you look somewhat like an adult if you can somehow hold back the giggles.

For more serious racers, there are also vehicle challenges. Transportation types can be similar but not exactly the same, and the challenges act as part tutorial and part practice mode. I tried one motor boat that looked like it was suited for the open ocean, then tried another more fit for a swamp. These work as little tutorials with time trials that require specific skills to master and naturally carry over to the more multiplayer aspects of the game. One of the boats I used was a kind of airboat for swamps. That bit about boats not doing so well on land? Well, the airboat can skid over certain surfaces for a brief time, helping them cut corners other boats can’t. The more open ocean boat certainly went faster but didn’t turn as well. The differences were slight but noticeable, so I could see the appeal of having a large roster of vehicles.

That being said, the game feels quite accessible for those outside the core racing fandom. A press of the button will put you back on the main course if you get too lost. Multiple camera perspectives help ensure that you can reduce/eliminate motion sickness. The large, online nature of the game helps ensure that you can play with friends and join with them relative ease, even while they’re racing.

I probably won’t buy The Crew 2. I’d still rather Mario Kart to get my race on. That being said, I haven’t enjoyed even a non-kart based racing demo like this since the ’90s. Ubisoft’s sequel actually improved on the original, opening up in ways I didn’t expect at all when I first heard of the game’s announcement. I know other big name racers were announced at E3 this year, and serious racers may have paid more attention to those, but The Crew 2 would be the game I’d use to try to lure kart racers into the genre. Just be careful with those “bend” scenes if you’re prone to motion sickness!

Destiny 2 hypes up its August 23 showcase and upcoming changes...