END_OF_DOCUMENT_TOKEN_TO_BE_REPLACED

You know, I was going to talk about the end of the Final Fantasy XIV: Stormblood MSQ this week, but I decided against it. Not because I don’t have things to shout about when it comes to the expansion, nor because I’ve already done a lot of shouting to some pink-haired cat who helped me along through most of it (a creature of mystery, that one), but because I am probably in the minority in being through the whole thing. So let’s give it another week. It hasn’t even been a week since the actual launch at this point.

Instead, I want to talk about some pretty interesting changes that can easily slip under the radar in terms of currencies. I wouldn’t say this stuff is easy to miss, exactly, but it’s easy to not really think about it when you’re knee-deep in going through the game. So let’s talk about currencies, what you can buy, and what implications this has for the game moving forward.

I finished the MSQ on Thursday in the early morning, and thus I’ve been doing my unlock queues and expert roulettes on a regular basis for a few days now. I will have my full Verity set probably by the end of the week (I’m not double-checking my math right this second, you understand), and before the capped tomestones are added I should have a full set for both of my two main jobs. Even if I didn’t it won’t be far off. But, of course, it doesn’t matter; this is the uncapped stuff, right? It doesn’t matter.

Or does it? Because I wonder if the weekly capped set isn’t also going to be cheap, due in no small part to the fact that the unified Poetics currency sets also became half as expensive at the same time. That took a while to happen when Heavensward launched, but now it was right there as a launch feature.

We’re not going to be getting Allagan Tomestones of Creation for a little while, to make sure that people have enough time to ramp up and get ready before weekly lockouts start happening. However, by that point it’s going to be pretty easy to have pretty extensive Verity sets on your job and other jobs; heck, you can probably gear up alts reliably (assuming you can log on to them, anyhow). There’s also the simple fact that generally, what’s been a big limiting factor in the game has been the speed of upgrading your gear sets rather than the speed of just acquiring the tomestone pieces. So could it be that we’re going to be more encouraged to play other jobs just by making it easier to buy full sets for our non-main jobs without being stymied elsewhere?

I can’t be sure. But the low cost of the Verity set certainly gives me a measure of hope for that.

I also wonder how this is going to tie into upgrading, if there will in fact be any upgrades. It’s also quite possible that rather than having a new set for Creation, our upgrades for the set will be explicitly tied to Creation tomestones, thus keeping some relevance all the way through; the fact that Verity doesn’t have an immediate upgrade tier available and that it’s dyeable right out of the gate seems notable to me. Not that I’m complaining, mind you, it’s a lovely set.

Or perhaps this is just to make sure that people coming into Omega normal and EX roulettes later on are able to catch up quickly, and the pricing on Creation sets will be the same as they ever have been. I don’t know. I’m hopeful, just the same; it’d be nice to feel as if you could gear up to competent points with something less than a full commitment from patch to patch. 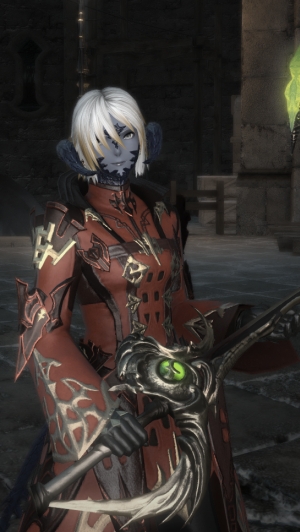 Grade VI materia is not expensive in terms of hunt seals. This is not a controversial statement, I think; you can buy a piece for 400 seals, and considering you can get 230 daily, it is not hard to get a full set for your gear. The only thing stopping me from slapping that everywhere is simply that we don’t yet have much in the way of stat weights and, y’know, it’ll be less than a month until we’re getting better gear.

Which, of course, is time to earn up a lot of Grade VI materia to slot into that gear. Just for the record.

I like to hold off for a little bit until I’m sure, but since my main character’s jobs are what they are I’m still betting on a high weight value for Crit and probably Determination. Direct Hit and Skill Speed seem fairly situational, still; I think there are definitely jobs which will benefit, but the fact that Ninja can’t stack the latter to improve Ninki gauge gain feels… balanced but unsatisfying, I suppose. Ah, well.

I find the carryover of seals to be an interesting aspect which ties directly into making materia so much easier to acquire; now that we’re used to being able to meld even on dungeon/tomestone sets, we’re clearly expected to do so with more freedom. Materia has gone from being rare and potent to being almost common, a tweak to stats and abilities that is almost required for doing things competently along the way. Even Grade V isn’t exactly hard to come by at this point, although it’s a bit less immediately repeatable; if you’re well-geared as you go through the MSQ, you’re likely to swim in materia as you pass on gear rewards, and high-end bits drop reliably in 70 dungeons.

What makes this particularly of interest to me is that it’s going to cause some pretty thorough rearrangement of how currencies, materia, and even converting gear is valued. At this point, converting gear for materia is one of the slowest ways to earn it, making spiritbonding in general more of a relic than a necessary mechanic. You still do it, because it happens almost by accident, but it’s not really your primary way of earning more materia. That, in turn, is going to affect the market quite a bit… at least for combat materia, which is one of the more active areas.

I wonder also if this presages some other use of Poetics in the future, since we’re seeing so much effort put into keeping older currencies relevant even now. Obviously, I can’t say that’s going to happen with any certainty, but I find myself awash in both currencies and previously rare items beyond the obvious point of doing more things due to the new expansion launch.

Not that I’m complaining, mind you. Give me those Grade VI materia, I know I’ll have a use for them. Even if I have to drop a thousand tomestones on Creation weapons or whatever.

As always, feedback is welcome in the comments down below or via mail to eliot@massivelyop.com. Next time around, I am going to discuss the Stormblood MSQ, but I promise there will be spoiler warnings and collapses where appropriate. I cannot, however, make promises about the comments.

On the question of the stat weight, at this point, I’m just going to go with Tenacity until the numbers are out. Simply put, I rather be able to do more damage, take less damage, take more healing to help healers who are currently gearing + be able to stabilize my runs simpler. Tenacity does that for me and I’ve been very successful. Tenacity + Determination.

It’s obvious that S-E is trying to get us to be more like tanks and less like extra DPS. So, with that in mind, I’ll gear that way.

Det + Tenacity is my way to go as a tank until things settle down and healers get used to the mechanics of the class. I only started getting more Tenacity on my character recently and my wife, a healer, has seen noticeable differences.

So good luck to those that do go a different route! I’ll stick to this and adapt accordingly.

Hoping as well that the tome change is the same for future gear. I rather not have to wait two weeks for one piece of gear (Chest/Pants). That killed wanting me to gear up any other classes to their maximum level, which hedged me into my tank role, which at one point you just get tired of and want to do other things.

So far, though, very minimal complaints on my end. =)

Unfortunately Tenacity seems to be one of the worst scaling stats in the game right now. It takes roughly 700 Tenacity to give you 1%. That would mean putting +40 Tenacity Materia VI in every single piece of gear that you get (19×40=760), for a marginal 1% gain (and even then, you can’t put tenacity in every slot). With full Battledance Materia VI melds, if a boss would hit you for 15,000, it will instead hit you for 14850, and your healer will get a 10,100 heal instead of a 10,000 heal.

Ugh. That’s somewhat unfortunate. They remove Parry for this and the stat seems to be pretty terrible.

It’s like Determination: The numbers are astronomically high that it almost makes no sense whatsoever to go towards that either. So they’re not really bonuses; they’re so minute that they can’t really be seen as bonuses.

Thanks for the warning. I will review when the 320 gear comes out. A damn damn shame..Hopefully someday we’ll get something that is a worthwhile tanking stat to invest in.

I get about 5-7 materia vi per hour by doing hunts and getting the cracked clusters; each one is a materia Vi of your choice. I made about 6m Gil yesterday by running A and S ranks and selling the materia, on top of all of the verity tomes (20 per A rank).

Since there are only so many ways to level alt jobs I find it silly they lock out anything. Like only 3 levequest (sp?) every 8-12 hours?

I’ve made it from 60-67 on my PLD by doing the MSQ (I just finished the Azim Steppe) and only doing the sidequests in Ruby Sea. Otherwise, it’s just MSQ and aethercurrent quests. Leveling and 50/60 roulettes, too, naturally. That was by my design, though, because I’ve got god knows how many more classes to get to 70.