I’ve recently been spending an increasing amount of my time improving the looks of my Guild Wars 2 characters: Although I have always greatly appreciated the wardrobe and dye options available to me, never before have I put in quite so much effort in creating fully realised looks that require such thought. I’ve been largely inspired by the handful of Guild Wars 2 Facebook groups I belong to, having weighed in on some lively debates over character design choices and having oohed and ahhed over some awe-inspiring finished looks. I also love seeing inspiration sketches and the online version of magazine cuttings; there’s something very charming about dreaming up a look for a character and then translating that to the skins and dyes that we have in our toolset.

In this edition of Flamseeker Chronicles, I thought it would be a fun departure to share some of my fashion wishlist and the rationale for some of my wishes with you. My toons are a perpetual work in progress, and I love thinking up imaginary pieces that would enhance them. I’d love to know if you’ve ever stumbled across an image that inspired a character design, and I’d likewise love to see how your characters are currently kitted out.

You might remember that I really enjoy when clever players manage to use the GW2 customisation toolsets to recreate popular icons within the gamespace. I have been amazed to walk past Santa Claus in Divinity’s Reach and tackle world bosses with the Hulk, and what always impresses me is the vision required to turn ordinary pieces of armour into such iconic costume pieces. ArenaNet knows that this creativity is happening, and while there would be issues with creating pieces that obviously mimic anyone else’s intellectual property, I think that more emphasis on overall shape and lines could help players create these looks more easily.

Intricate outlines and highly textured finishes certainly have their place and are preferred by many as standalone pieces, but smoother pieces that can be used to change the appearance of a character’s physique in certain areas or that would provide an easy template to recolour would be amazing. I would love to see tapered arm coverings that add bulk to the shoulder without also adding heavy detail, for instance, and likewise for leg pieces. When colour and the use of appropriate higher-detail pieces is employed, such innocuous pieces would certainly help to create these highly iconic characters without compromise.

My main use for such pieces would be for enhancing an Asura I recently created whom I wish to see clad in simplistic but nevertheless impressive-looking armour. She is a Warrior, and I find that the high-end skins simply don’t sit well on her diminutive frame: While one or two standout pieces would work, perhaps a chest piece and weapon, I don’t like the detail overload and heavy overlap when a full set of such pieces is used. I would love to pair a favourite key piece with sleeker (but nevertheless still undeniably heavy armour) sidenotes for balance. She has pale golden-amber eyes and straw-like hair, so I tend to use burnished shades on her that sit beautifully on metallic pieces.

The cultural armour offered in GW2 has always held a great appeal to me and usually forms the starting point of my character designs should I not have a strong point of view in terms of their aesthetic. I find some racial pieces more fitting than others, and the most exciting in terms of design to me is the Sylvari skins due to the use of organic material. With careful colouring and use of the pieces’ bioluminescence to tie in with the Sylvari’s own glow, these pieces can look like extensions of the character model; a sort of indelibly linked bio-armour that really appeals to me.

I would love to see stronger seeming armour build in this same style: After all the plant-based conceptual work that went into Heart of Thorns, I would love to see pieces that featured some more aggressive detailing such as thorns, tendrils, and barbed bracken. Likewise, I feel that this extension of the character model into the armour could be carried on for other races: Prosthetics and biotechnology would greatly enhance character designs across the board, especially where they are catered specifically to a race and its prevailing aesthetic. Imagine if Asuran armour could elevate one’s stature to mirror the character’s ego, for instance.

I would use such pieces to greatly improve my Sylvari Necromancer, the character you might have seen in many of my screenshots throughout the lifespan of the column. I severely dislike dressing her in anything other than full, skin-complementary Dryad gear, but the fact that the pieces are so overtly feminine bothers me. She’s not a particularly feminine Sylvari, and when I think of necromancers, I certainly don’t imagine a soft, petal-like leaf skirt. I would prefer her armour to not detract from her natural form and would love for it to have the harder edge I described above. Right now, I have used an accent of Shadow Abyss dye to tone down the marrow and teal tones I use on my toon on the pearlescent leaves featured on this armour set, but she deserves better. 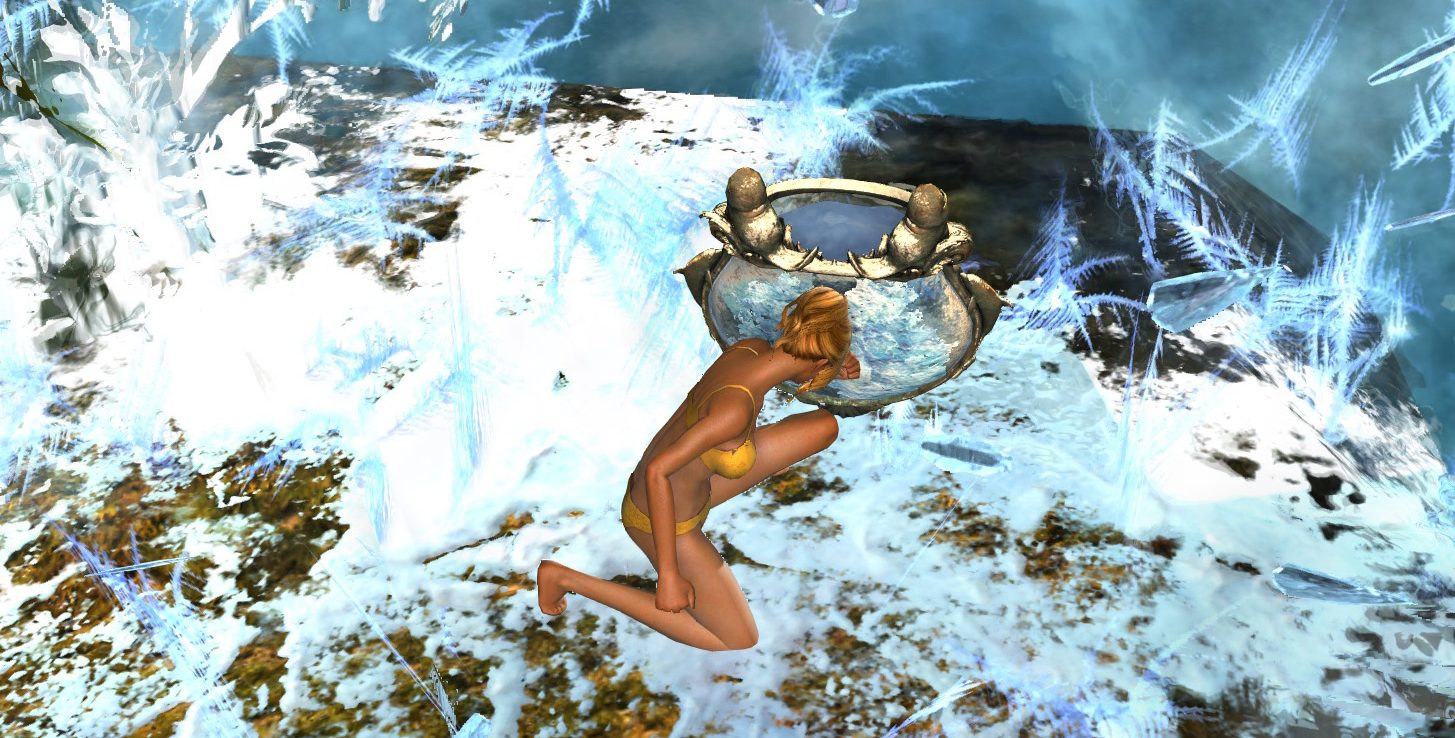 I have a great confession to make: I find legendary weapons extremely difficult to wear and seldom find a look that features a legendary skin that I’m truly happy with. While I’ll be delighted to be proven wrong by some glorious screenshots in the comments section, I assert that these pieces are so special in terms of their aesthetic that it is notoriously difficult to balance them into cohesive looks with a strong point of view. I’m not the most original character designer ever, so this might be a Tina limitation rather than one felt widely in the community, but I certainly would love to see a solution to this.

How wonderful would it be if, during each legendary journey, we happened across complementary skins and worked towards building an entire look? Perhaps these could be rewards at key stages in the legendary journey, or maybe they could simply be purchasable at key locations, but either way, I would love to go in for a themed look like this. I’m thinking especially of the hardest pieces to wear that do scream silly on their own, such as the Shooshadoo. Give me matching Poseidon-looking gear with tarnished golds and plenty of seaweed and sea creature encrusting and I’m sold!

This is perhaps the most useful addition I’ve suggested in terms of adding alt character value for me. If I had access to complete looks that made the legendaries hold greater personal appeal, I would sink time into the pursuit of my favourites for characters specifically made for that journey and finished look. My Norn Mesmer and Human Revenant would be excellent candidates for such pursuits too: Neither has a look that I’m sold on and I’d gladly take some inspiration from a legendary quest.

How much time do you spend designing your characters? Do you have any sketches, finished looks, or inspiration pictures you could share? If you could design a piece or a collection for GW2, what would you create? Let me know your thoughts in the comments.

My wish: Charr tails not clipping everything.

I am most thankful, Anet has reintroduced some former exclusive sPvP armor sets, that got lost in translation, when they got rid of the Glory currency way back then.

I wanted a certain hat and shoulder parts with included buttoned-up high collars so badly (3 & 4), because it reminded me of the awesome costumes from the film Brotherhood of the Wolf (1)!

But later, a random player once came up to me and pointed out, that my char reminded her/him of the guy from the game Bloodborne (2 & 5)!

This is that outfit I was talking about for the Asura Warrior.

An end to Floating Shoulder Syndrome and leg pieces that don’t don’t add several inches of clothing to the belt area for no reason.

Rework outfits so that you can either turn off each piece individually, or at least make the chest and legs one piece and supplement the other areas with armor.

Sell outfits that are really just an effect/aura such as flame or floating orbs that coexist with armor.

Fun fact: Sylvari Cultural Armor is actually grown from their own bodies. It’s literally part of them! This also means that any salad you see in cultural armor is technically naked. :)

I desperately want some modern clothing.
We have sci-fi armors, western outfits and tentacles, so why not something modern? I already have a cap and a t-shirt so…
I need a nice looking suit for my Norn that looks a lot like 80s’ Annie Lennox.

In general I hate the gendered armours. I just want both designs to be available instead of being pigeon holed into one type… that can be ridiculously different depending on gender. Phalanx armor anyone?

And just stop shaving my head when I put on a hat, seriously.
I want to mix and match, and so many elements are just a no-no if you’re not a bald Asura.

I’m pretty sure they have suits as Outfits, and they come across as male on Asura and Char regardless of gender.

So you would have to make an Annie Lennox Asura I guess.

Good luck with your new looks, try the new Iron Man suit for the Asura Warrior, and the Mordrem Outfit for the Sylvari Necro. On to more pressing matters, shouldn’t there be a trailer today for the next LW Episode or at least an update from MO telling us where they’re at?

I’m assuming sometime this week or next for the trailer.

Flashpoint launched on May 2, not even two months ago. Based on their previous announcements, I’d be really surprised to get any info before at least two weeks.