END_OF_DOCUMENT_TOKEN_TO_BE_REPLACED
Warframe’s second annual fan convention has ended, and now it’s time to reflect back on a very fun and full day. I wondered how Digital Extremes would top last year’s inaugural TennoCon — I remember the cheers that burst out for the new Warframe announcements in 2016, but that paled to the reaction at this year’s Tenno Live.

Viewers at home didn’t get to see and hear the initial reaction to the big Plains of Eidolon announcement — it was silence. Not silence because it wasn’t impressive but silence because the audience was surprised and in total disbelief; Game Director Steve Sinclair shared that this was the first content ever to not be leaked! Whispers of “No way,” and “It couldn’t be,” bubbled up, and the tension and awe grew palpably as Live Operations and Community Producer Rebecca Ford maneuvered through the new relay Cetus while Sinclair narrated. But everyone heard when she opened that door to the Plains of Eidolon and walked through: The audience simply erupted in cheers.

However, that was just the ending hour of an entire day packed with Warframe goodness. While understandably much of the talk about TennoCon 2017 is focused on that announcement (who wouldn’t want to discuss open landscapes?!), there was a ton more that happened. I may not have gotten my wish of the convention doubling in days to cover the whole weekend, but it still doubled in size in both attendance and things to do. There was so much that even those who attended missed things. Besides art and sound panels, a TopCow comic panel (I’m proudly displaying my signed copy of issue #1), and the cosplay contest, there were special meet and greets, workshops, and script readings. The photo station and archery room returned, and this year added a Syndicate search activity as well as an escape room. Again players could chill in large comfy chairs and listen to the soundtracks, play the game on PC or consoles, buy souvenirs, compete, and basically mingle with fans and devs alike. Oh, and there was a little teaser to cap the event of a certain upcoming addition: the much-anticipated Umbra! 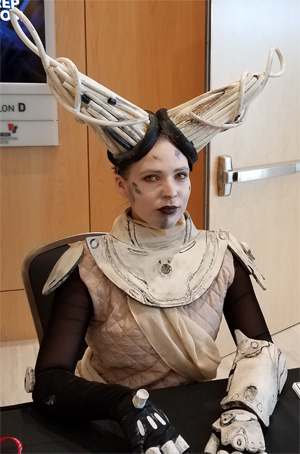 Building community in more ways than one

OK, so getting together with fans and devs and learning cool things about your favorite game is awesome in and of itself, but the fact that proceeds from the event actually go to help others just catapults this con above the rest in my humble opinion. Ford announced during Tenno Live that this year’s donation is $150,000, nearly doubling last year’s number. The funds go to Covenant House Toronto to help at-risk youth. Next year, if you are debating a ticket or upgrading to VIP (which sells out extremely fast!), maybe the fact that sales go to helping others will help your decision.

One problem with an expanding convention is that there is no way possible to attend all the interesting workshops and panels. You have to decide! We already know I hate decisions, and it’s worse when I know I’ll have to miss awesome stuff. This year had two workshops that were dedicated to the readings of cinematic scripts. Both The Second Dream and The War Within were read. Fans could also join in a discussion languages in Warframe and learn the Orokin script. How I wish I could have gone to all of them! Curse my inability to clone myself or bend time to meet my will.

A number of workshops focused on how the game is made. One highlighted animation; another, level design. If you wanted to learn about weapons, there was a workshop dedicated to weapon creation as well! And if you really wanted to try your hand at making the game, there was a hands-on with the evolution engine that players could check out to work with devs to create rooms and layouts. Additionally, TennoGen Creators had a panel, and the new items developed for the game were highlighted during Tenno Live. Of course there was also an hour that delved into the making of the recent new release, Harrow.

If you’d also like to actually get in on making the game yourself, there was a panel on how to get a job at Digital Extremes, or the gaming industry in general. 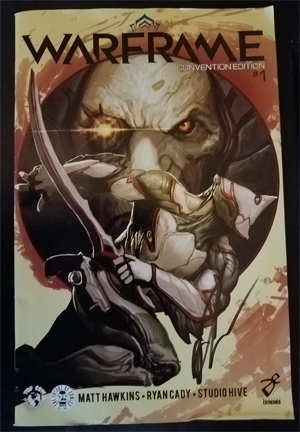 Folks who love comics and folks who just want more Warframe story can both appreciate this new addition to the universe. The first edition of the comic was handed out in physical form to attendees, who also had the chance to get it signed after the comic panel. If you couldn’t make it to the con, don’t worry: The comic is available to read for free in digital format right now! An extended edition will also be found at retailers this falI.The digital version includes the code for a free sword in game (redeemable until October 1st, 2017) as well as opportunities to download other titles to enjoy.

GHOULS: Part One was written by Matt Hawkins and Ryan Cady, with art by Studio Hive and lettering by Troy Peteri. Without sharing the whole story, I can say the comic does tie right in with the incoming expansion. It also introduces a new Grineer, the Ghouls. (Fans got to see concept art for these creatures during the art panel.

The last few minutes of the convention may not have been long, but they packed a wallop! Talk about ending on a bang: The devs capped it off with the Umbra teaser, which drove the crowd wild. That minute and a half has sparked hours of discussion as the speculation begins. Phrases of trading, sacrifice, and the more blatant “For their life, yours” have folks wondering what the steps to get Umbra will be. Will player have to give a life, give a Warframe? Will Excalibur have to be sacrificed? How long until we know these answers?! While introducing the clip, Art Director Geoff Crookes remarked that the clip was the tease of the next cinematic quest, saying that “the idea of this quest is to give a little bit of insight into what the Warframes are.” Hmm!

So what do we do now that it’s all over? Now, we wait. We enjoy the memories and friendships of TennoCon 2017, we speculate about Umbra, we anticipate the summer release of Plains of Eidolon, and we look forward to TennoCon 2018. I certainly hope to be there! (But dang, how will they top this year?)

Disclosure: In accordance with Massively OP’s ethics policy, we must disclose that Digital Extremes paid for our writer’s travel to and accommodation at this event. The studio has neither requested nor been granted any control or influence over our coverage of the event.
Advertisement

Warframe has somehow managed to get me interested in a shooter again. I think Global Agenda was the only other time that happened. And, funny enough, less than 24 hours before the TennoLive announcement, I was saying that if Warframe mission areas open up a bit later (I have still only seen Earth) it would remind me even more of what I really liked in Global Agenda.

Massively Overthinking: Is there an MMO you’d never be caught dead...