END_OF_DOCUMENT_TOKEN_TO_BE_REPLACED

It’s kind of ironic that Omega may be the first time in Final Fantasy XIV where the eponymous foe is our actual antagonist. The Binding Coil of Bahamut and Alexander both featured the named Primals, but in both cases we weren’t really picking apart anything they did; Bahamut was just doing what came naturally while Allagan devices prodded at him, and Alexander was essentially fulfilling something that had already happened. Omega, on the other hand, is aware of us and not our biggest fan to begin with.

I wound up powering through the entirety of Omega’s normal mode on the same day it was released, somewhat to my surprise. (It was a bit of a highlight.) Obviously, not everything is going to be clear on just one playthrough, but now that we’ve gotten our first week or so with our new high-end endgame stuff, it seems like a good chance to pick apart what worked, what didn’t, and what’s worth considering with this new raid. Both in terms of story and mechanics, I might note.

Please note, of course, that there may be minor spoilers within. There’s nothing that gives away big chunks of plot, but if you haven’t yet done Omega and really want to remain wholly unspoiled… tread lightly. 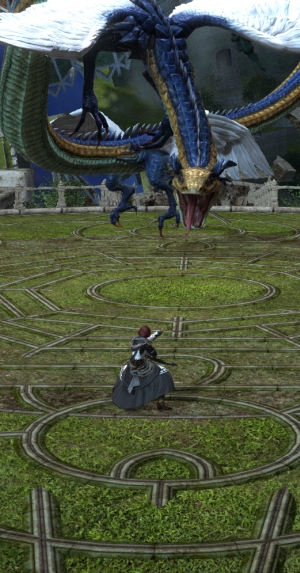 Mechanics are where I want to start, though, because the raid is obviously going full-in on exactly that. Unlike Alexander or Coil, it’s very clear that Omega is setting itself up to be a run of boss fights first and foremost. There’s no trash to clear away, and from a purely functional standpoint these could easily serve as several disconnected Primal fights with similar rewards. It’s only the thematic connection that ties everything into one place, and the fact that the boss fights are willing to move rather far afield mechanically.

While the first boss isn’t too interesting in that regard, the other three are really neat. A lot of people have trouble with Catastrophe’s gravity-swapping mechanic, and I think there’s a case to be made that seeing the overlapping symbols for airborne and ground-based attacks can sometimes be confusing, but I also think it’s a really original fight. What could be as simple as dodging up or down becomes more complex by understanding how mechanics are being deployed and knowing that you can’t force a descent early.

Meanwhile, Halicarnassus (the new one, that is… we’ll need a way to differentiate these two) has some really neat stuff going on. I massively enjoy her frog gameboard mechanic; it’s the sort of thing that gives you pause the first time, even though you have ample warning about what’s going to happen and some people will get it before being told. Plus the sliding puzzle in the middle breaks up the flow nicely.

And you cap the whole thing off with a fight that is, on some level, a pretty straightforward matter of dodging… but it manages to feel different because you’re not constantly dodging the same ways. You’re constantly hitting different patterns of movement, and you’re paying attention to visual cues you might otherwise ignore. Although I feel like the void-channeling bit could use a bit more visual cue; it can be awful easy to miss the difference with Thunder as a melee character.

Still, though, it’s a series of fun fights, easily matching the fun that could be had with the end of Alexander; I also don’t find it to have any major stumbling blocks akin to Cruise Chaser, although that may be wholly subjective. We’ll see how I feel after another couple of weeks.

Of course, the nature of the game means that you can ignore the story if you really want to, so good fights and bad story carry a raid better than bad fights and a solid story. Fortunately, at least so far, I’m really enjoying the Omega story that’s developing, despite the fact that the story already has a favorite whipping boy of the community.

I have my own issues with Alpha as a presence, but most of those come down to the fact that his very Chocobo’s Dungeon-inspired design clashes a bit with the game’s existing art style. But that’s literally all you can critique him for at this point. He’s not the cute mascot, comic relief, or morality pet of the group. You aren’t going after Omega to protect him; no one even suggests protecting him, and the team was looking into Omega before he showed up. He provides a useful function and does nothing silly aside from having an exaggerated cute wave. And his presence raises questions about Omega that have yet to be fully answered, quite intentionally.

Omega itself is fascinating. In some ways, it’s a call back to a bit of Transformers cosmic fiction that I rather like, the idea that the ultimate destroyer has no idea how to create and thus can only imitate. That also gives the developers space and excuses to do things like, well, the entirety of the Deltascape; storybook bosses fit nicely for the lengthy Final Fantasy V nod.

Beyond that, Nero’s here. Need I say more? Nero is wonderful. He’s almost criminally underused (mostly, I suspect, to avoid blunting his impact), and I would entirely believe that he really doesn’t have an angle here other than wanting to learn about Omega. I would, however, also believe that he’s playing Cid like a fiddle. Both are equally plausible, and his motives remain opaque regardless. 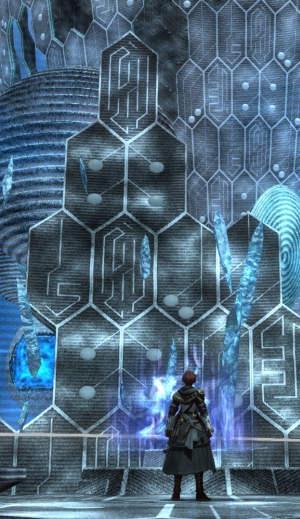 And Omega, more than its predecessors, feels like a plausibly esoteric threat. It’s a danger to the world in a way that Alexander never quite seemed to be; no one could deny that Omega is a massively destructive weapon with high-end designs. At the same time, the Binding Coil always felt like it was being undersold as a threat, while Omega feels like something that could plausibly remain a sideline. It’s there, it’s dangerous, but it isn’t actively wrecking things, and it’s unclear how long it might remain dormant before that changes.

Complaints? I do have a few. The token system is still kind of awkward for drops; I understand why it’s there and it’s a good step along the way, but I’d like to see something be done about it or some way for players to be a little less reliant on blind luck there. The overall aesthetics also don’t quite work for me; while the Deltascape proper is a fun effort to recreate the feel and visuals of FFV in FFXIV, Omega’s heavily zeerust interiors lack the usual alien beauty of high technology in FFXIV. Allagan facilities, Goblin headquarters, Garlean fortifications; all of those feel like familiar functions in odd but logical shapes. Omega just feels like an abandoned set from an old science fiction serial.

These are, however, little things. I already like this story better than I liked the Alexander storyline, and the actual mechanics seem fun. So while it may not be perfect (to the surprise of basically no one), I can definitely see myself enjoying the heck out of this ride straight through to the end. Not that I’ll know for another year or so.

Feedback, like always, is welcome in the comments below or via mail to eliot@massivelyop.com. Next time around, I’d like to talk about stat weights, numbers, gearing, best-in-slot, and balancing acts. It will be wide-ranging, if that wasn’t clear.

I’m really glad Nero’s back tbh. He makes for a great villain turned rival and adds a fun new dynamic to Cid’s stuff. And he seems unlikely to backstab or turn traitor unless the odds are in his favor. Ultimately he’ll probably just wind up being a rival for Cid and a controversial representative of Garlond/Allagan tech expertise.

It’s too bad they are continuing the convoluted shitty gearing system from Alexander.

Really hoping each wing is a different FF. And that one of those is VIII ;-;

Would be a riot if Alpha is actually Omega in disguise.

Who doesn’t love Nero? Besides CId, that is. His smile alone can send send small children running for their parents.

I’m also glad to have Midgarsormr back. Considering he’s supposed to be mystically following us around I wasn’t sure what was going to happen to him after HW. We have him as a mount for pete’s sake, but would he never speak to us again? At the same time he’s both wonderful material and a possible game-breaker for the story.

Right! There were definitely a few points in SB where I thought Mids might pop in with a peanut gallery comment. I was disappointed he didn’t so when he did in the Ultima raid I got real excited.