END_OF_DOCUMENT_TOKEN_TO_BE_REPLACED
How big is Destiny 2 going to be? Really big, SuperData predicts.

The gaming analysis firm claims that “by analyzing historical data [of Destiny 1] and [SuperData’s own] proprietary analytics-based metric system,” it’s concluded Bungie will likely sell between 4 and 5 million digital copies within its first three months of sales. That’s console and PC included.

“The forecast also takes into account the expected early September launch date of the title, the impact of a Battlenet release on PC and macro-level digital download trends,” says SuperData. 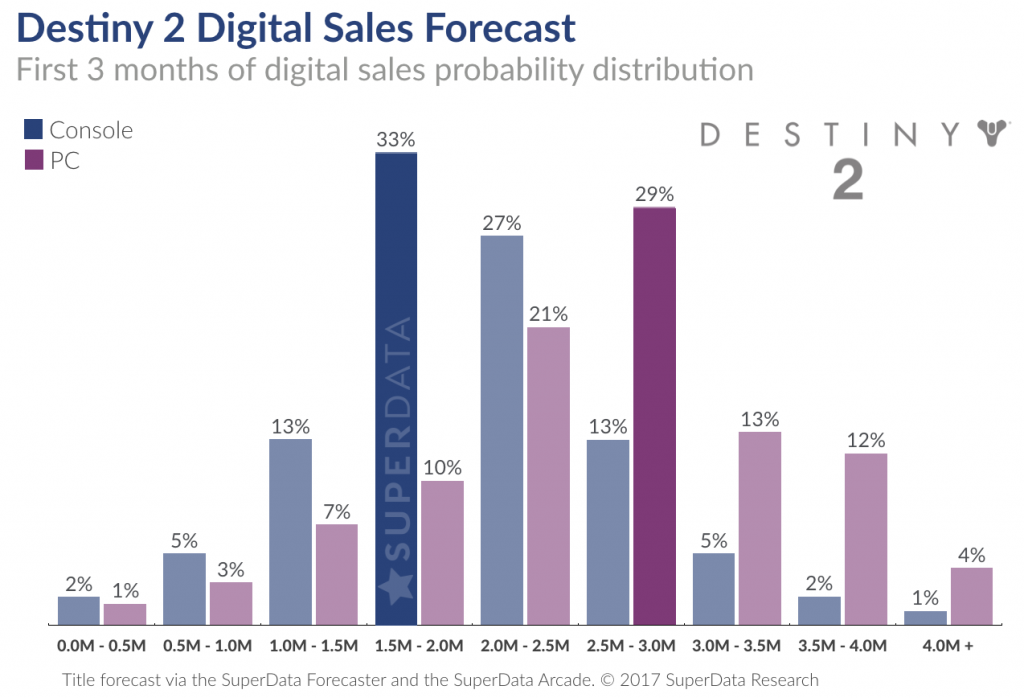 This will only encourage companies to continue making boring games.

Destiny seems to be basically a lobby shooter.

It isn’t a lobby shooter, well, no more than people waiting for a queue pop in a standard MMO for a dungeon. Actually, Destiny dungeons pop quickly.

You zone into a planet and have plenty of room to explore. There are hidden treasures, open world quests, open world raid bosses and dailies. You have gear progression. It is a MMO without the label.

It’s not even close to being an MMO, probably the reason why the devs have specifically avoided calling it one and when asked, always say that it isn’t one.

It may well have many of the same features typically found in MMORPGs, but without the ability to support 100s+ players in the same virtual world it is not an MMO.

Back on topic….a sequel to a popular game is predicted to be popular……who knew?!?!?

Alex, there are basically no more MMOs, if this is the case. Stick a fork in her, she is done.

Of course it is going to sell.

“Destiny accrued over $500 million in pre-order and day one sales. Furthermore, the game sold 6.3 million units in its first month on sale, which amounted to additional $47.5 million in revenue.”

I’m surprised to see they think the PC version is likely to outsell the console versions by 1 million units.

Start date??? Oh you sweet summer child (four days!!!!) :-) I would guess that Destiny will be one of best selling games of the year prior to something as old-fashioned as a launch date. At least it is four years later in the cycle than the typical EA/KS/CF game.

With attention to detail like that we can surely be confident in their analysis.

With what Warframe just demo’d, I’m willing to wait on Destiny 2. What’s the player count for Destiny 2? Is it truly an open world MMO?

Im super hyped about the new Warframe expansion. But reality says that Destiny 2 has a HUGE head start at getting things done right. This is warframes first venture into the open world element of an mmorpg, and it will be very easy for them to miss a lot of key elements that will affect replayability and immersion.

Destiny on the other hand, has a huge list of things they did right and things they did wrong, and are building Destiny 2 off of that. Sure, they could still royally screw things up, but I think they are in a better spot for putting out a game that meets more of the qualifications for a lasting, enjoyable experience.

I do hope Warframe manages to nail it though, because I do enjoy the devs mindset for the game, and the game itself. Its just super repetitive and grindy, even for an mmo.

You will load into a small map for each planet and every few minutes see one of a dozen people in your instance of that zone. Each zone is a planet, 4 or 5 ‘planets’ to play across.

A lot of PC only players seem to think this is an open world borderlands, its a hybrid of halo reach and diablo without repeating maps. Just like 5 maps.

FYI, Borderlands wasnt open world, its more of what you described Destiny 2 to be.
:P

And “small map” is subjective. I think small map when i think of a game like the Doom remake. Destiny’s zones (at least in the first game) felt playbably larger than that to me.

Sadly, that won’t be far off the mark. Nothing against Bungie or Destiny but I hate the sheepish attitude of mainstream media consumers.

Why, because they want to buy the sequel to a popular game, especially folks who missed out on the first installment because it wasn’t on their platform of choice?

In that case, I hate the sheepish attitude of mainstream food consumers who choose to buy food and eat it.

everyone is so edgy today, fightin the man on their iPhones!

Do you even lift bro?!

I lift my coffee cup, sitting in this beautiful coffee cup robe and salute Robert Paulson.