“We’re pretty sure you’d rather play the game before the heat death of the universe than have us hand-craft an entire worldwide ecology from the smallest ant to the biggest tree. […] We’re not making Vanimus Prime model and texture sex organs.”

You can make a game of taking Chronicles of Elyria newsletter quotes completely out of context, as there is a higher quotient of strange than you’d normally find in such MMO updates. That said, this week’s letter is mostly concerned with wrapping up the devs’ extended discussion on the game’s tribes, talking about the locomotion system for this non-fast-travel world, and fleshing out the world’s fauna with familiar creatures from our world.

The team also gave an early glimpse of the voxel visuals that it will be using for its upcoming ElyriaMUD game. Apparently the team will use a converter to take the graphics already made in Elyria and transform them into blocky representations. Check out some of the MUD voxel models after the break and try not to drool too much over those shapely figures. 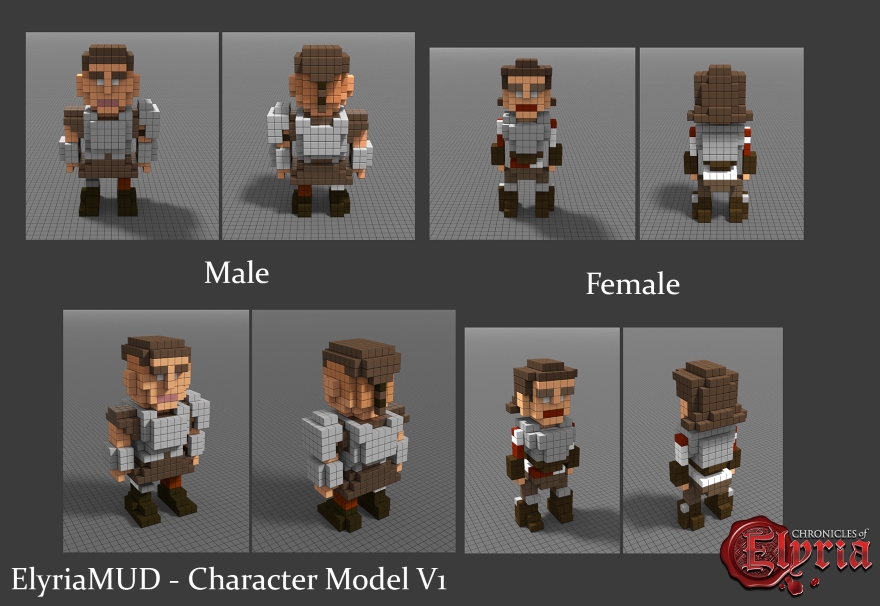 I wasn’t aware that they had diverted some development resources to a second game. Makes me glad that I didn’t back the game, to be honest.

This always seems to happen. They can’t ever seem to just focus on the game and its features. It’s either an infinite stream of new stuff or they start making a second game long before the first is close to finish.

Actually, this is a false assumption. The voxel version isn’t a second game, it’s the same game running under a different client.

This voxel version allows them to test the engine and its mechanics much faster and more efficient during development and provide an alpha experience earlier. Things that would taken them days to test in the full graphical version only takes a hour in the voxel version. For the alpha it means they can present the game to players without having to worrying about first finishing or perfecting textures, 3D models, and animations as the voxelized assets don’t show any detail.

No comments on that header image? That picture raises so many questions. I can tell by the horses expression that he didn’t fully think it through before boarding the boat.

Hmm… interesting. Glad to see we are hearing about the MUD.

So how exactly those voxel models will fit into MUD that is text based game?

Some MUDS offer a graphical representation of the world despite using a text-based interface for user commands and such. That’s probably what’s going on here.

It first was planned as a text based MUD, now as the developers more and more realise its potential it evolves into a 3D voxel mmo.

The Daily Grind: What cosmetic option do you like to have...