Who among us hasn’t played a video game at some point and decided to create his or her favorite fictional character? At least Mysecretid is being honest about it: “DCUO sets up this idea that the players can be proteges of existing DC heroes and villains. Although many players ignore this possibility, I decided to make my character a clear Superman fan — as I am.

“I realize that Superman is often terribly written, but when someone ‘gets’ the character, he’s golden. I re-created my main from the PC on my PS4. I’ve been having a lot of fun, despite the game’s flaws.” 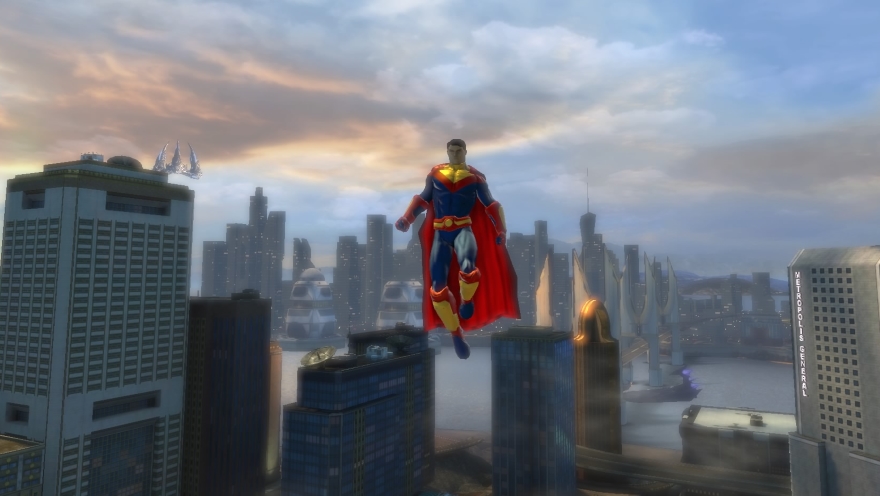 “This is my character Winterlock Speare from Final Fantasy XIV,” Sean emailed in, “who I just glamoured up to have a perfect scholarly look, as he peruses his Face Book, in Hawker’s Alley. You will notice he has a unicolt in the foreground for company. The book’s eyes actually move and the best part is that it is able to be gotten through the storyline!”

Face book? Well that’s one screenshot that I’ll have to (puts on sunglasses) like! 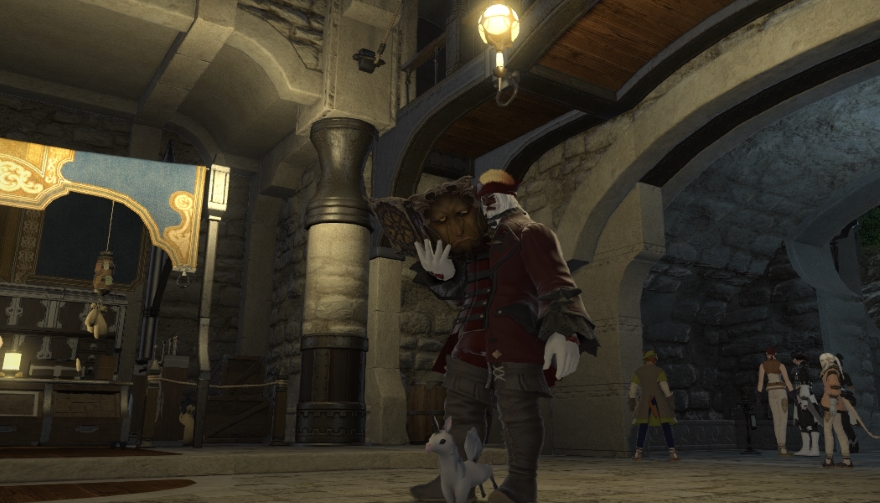 As a certain sci-fi MMO has finally killed off the last vestiges of getting out of one’s ship and walking around, Elite: Dangerous is gleefully romping across planetary surfaces.

Rees Racer looks like he’s having fun: “Some of the vistas are breathtaking to behold. This is Alpha Tucanae A1, the planet in the system nearest to a K-type orange giant star. Although this world is 50% further away than Earth is from our own sun, this star is 30x larger, and looms menacingly in the background. With no atmosphere and a surface temperature of more than 500°C (almost 1000°F), I’m content to remain in the car (SRV).” 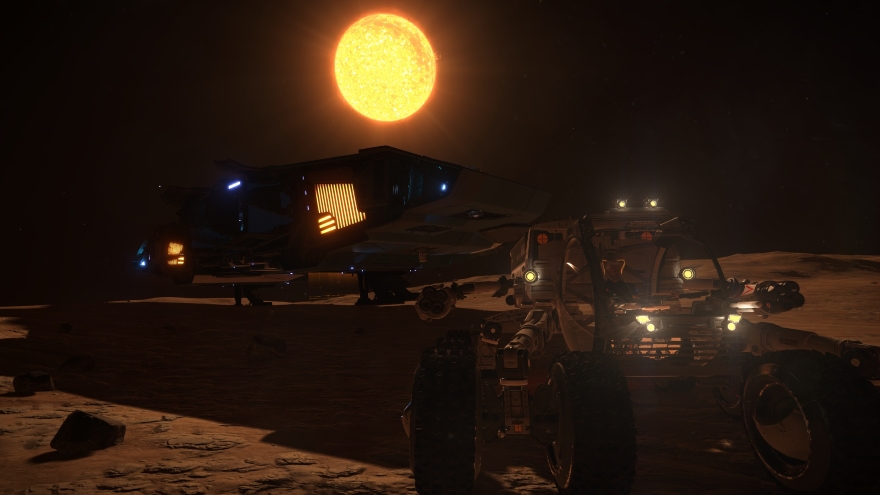 There were plenty of incredibly awesome “favorite” biome pictures posted last week, and I certainly had my hands full picking the best of the best. I admit that I am a sucker for bioluminescent anything, so I’m highlighting this TERA picture from a certain pink ponytailed poster.

“Favorite biome? Well, that one is easy! And I really don’t have to explain why,” said Utakata. 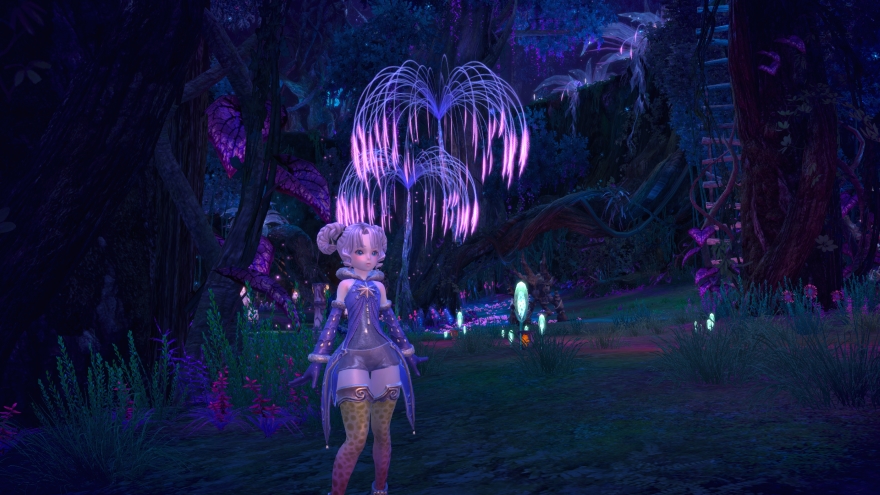 Admiral Jon Sleeper responded to my disparaging of Star Trek Online’s new Universe-class ships with this jaw-dropping example of the ship’s contemporary over on the Romulan side.

“Roddenberry had this idea that the Galaxy class was basically a city in space with missions going on twenty years, which was why crew had their families aboard,” Jon wrote. “I think the Universe-class was designed in three days, and it shows. The Romulan and Klingon variants of these ships look much better.”

You all are so amazing with your pictures every week, have I told you that? So let’s celebrate you being awesome by taking and sharing pictures of you at a victorious moment. Did you down a boss? Finally conquer that jumping puzzle? Reach the level cap? Share it this week in screenshot form!

Here I am, surveying the scene and calculating the amount of duct tape I need, after defeating the last boss in a dungeon in SWL.

Gaffer’s tape and some quantum spackle and that’ll close right up.

A featured screenshot? Thanks, Justin. I’ll smite a few evildoers on your behalf, citizen! :-)

Not the prettiest shot but reaching Sag A in E:D sure felt like victory to me.
Luckily I took a few shots on the way like this moody one of my cobra in the shadows of 2 white stars.

Madness? This is SWL!

So um…what where you doing up there? o.O

Flew up to Alaska to visit my mom & after a bunch of delays and transfers I ended up on an overnight flight from LA to Anchorage.

Image Two: My own victory’s are far less cool. Here I am winning a game as Leoric. I win the game being headbutted into the core. = /

Image Three: This next shot is a shot of failure (I had to be teleported to the gate. I kept falling). Needless to say I am not the next Karate Kid.

Image Four: Here is pic of someone else’s getting a legendary staff.

Can’t wait for the next episode of GW2, where we’ll finally be able to visit Orr in its current state after Zhaitan’s influence has dissipated so many years ago, even if the rest of Orr will stay suspended in time, now just like any other themepark. :/

So here you are: The entrance to the ruins of the Cathedral of Silence, the first temple of Grenth, the human god of death and judgement!

spoilers & speculations:
Once half human half god, he defeated and imprisoned the previous ruler of the underworld. As judge over the dead, he despises deception and illusions, so perhaps he will be an ally against those other now power hungry and deceitful gods like Balthazar, who got help by Lyssa to pass off as Lazarus.
bonus: Anyone in need of some spare golem parts? ;P
You must be logged in to vote8You must be logged in to vote

It’ll be a new area in Orr for sure. Changing current Orr will be problematic due to the personal story. As much as I’d like to see changes happen, I don’t see a practical way of doing it due to mmo game mechanics

The personal story is already arranged & saved as an instanced version of certain places, as you already have chapters still happening in the old version of Lion’s Arch!

But sure, as we know it since WoW’s Cataclysm, a majority of themepark players hate sandbox-like change to their beloved places, where they made fond memories and would miss them, as also having phasing would fracture the community.

But keeping the instanced versions for the personal story instead, was for me a good way to have both. Anet only forgot to make the vanilla story just as instantly replayable as the rest of the chapters with their instanced locations as it was already introduced with season 2! No one would claim that art/assets were lost and everyone could visit old Lion’s Arch anytime they wanted, and wouldn’t need to reroll an alt, level up to 40 and redo the first 17 missions or so everytime, only for wanting to revisit it once instead! :)

you don’t want to know what I did.
I seen things, man. And stuff, too.

The day that Duncan Jones used me in a poster tease for his upcoming Warcraft movie. >.>

PS: (Ahem!) I know…it was Shopped by my pigtails from this portrait of myself I think I’ve shown a few times in this publication. My bad! But as the said director’s Father once said, “We can be heroes…” <3

Also PS: They are pigtails, Mr. Justin and not “ponytails”. As I have two of them. But thanks for the pink plug again! /bows :)

While victorious moments are worth documenting, i rarely do! i look for the small details, things i will notice in real life, like this shop in SWL, it have a beautiful carpet, and i’m all like “oooh carpet, how pretty!” or a totem outside the shop, i do the same with other games, small details make me happy to notice them, in games and in real life.

Funny how minds work I thought much the same about the totem pole but that thought was quickly overridden by “I wonder if I can sit on the top”, turn out you can. :-)

Now i wonder how did you reach that place? i tried to reach the roof of the shop, but gave up quickly, i’ll try again :-)

Um well that and there is a dumpster round back that you can jump on and from that onto the roof ;-)

No spoilers, so I’ll just pass along a TERA cutscene shot from a meeting with Priestess Ciebel after the defeat of a traitorous threat to the Alliance. Of course, my Gunner is issued new orders almost immediately as there are seemingly always other harbingers of doom to confront…

I never really got that Samael business…it felt a little contrived to me. However, on the brighter side, one does get a fresh pair on underwear (!?) out it. o.O