END_OF_DOCUMENT_TOKEN_TO_BE_REPLACED
Although the vast majority of my time in Elder Scrolls Online is spent solo, running through the single-player storylines, I raid and have done a lot of group activities in other MMORPGs. So when I was invited to run the newest dungeons with some of the developers, specifically Creative Director Rich Lambert and Dungeon Lead Mike Finnigan , I had to say yes. The actual run was livestreamed yesterday and since posted to YouTube. (I’ll post the video below.) But during that time, I didn’t really get a chance to give my impressions of what was happening, so perhaps now would be a good time to let you know what I thought.

Most of us here are PC players, so you will be glad to know that this dungeon releases on August 14th with the Horns of the Reach DLC for PC, but for those playing it on consoles, you will have to wait another couple of weeks until August 29th to actually play the dungeons. As for the whole DLC itself, it’s much like the Shadows of the Hist DLC: There are new achievements and meta-changes to classes, but for the most part, it revolves around two four-man dungeons. The one I ran was called Falkreath’s Hold.

A bit of history

Skyrim fans will recognize Falkreath’s Hold as a town in the southwestern part of the map that is overlooked by Shriekwind Bastion. In fact, during my gameplay of the normal-mode dungeon, Finnigan pointed out the bastion to me. You can see one of its southern walls with the telltale dragon-head pillars just before you get to the main gate of Falkreath. But Falkreath is a lot different during the ESO era. In fact, according to the developers, the town is at its peak. The centuries of battle have not taken its toll on the city, and the land isn’t quite as full of as many ghosts… well, almost.

Falkreath, as a part of the Reach, has already seen its fair share of battle. Some of the first settlers there were Bretons, of all people, although they didn’t really include themselves with the other Bretons of Daggerfall, which of course had its own tension. These Bretons intermingled with the Nords from the bordering province of Skyrim, creating a hybrid people who call themselves Reachmen, a mix of Breton, Elf, and Nord. But because of its proximity to Cyrodiil as well as the western Daggerfall peninsula, the Reach is almost always in a constant state of war. This is on top of the ten kings who ruled the land at one point prior to the collapse of the Alyssian Empire.

When we run into Falkreath, it’s overseen by a Nord Jarl named Skjoralmor, but unfortunately for him, that’s being contested by the Reachmen and their Bull-men friends. And that leads us directly into the dungeon. 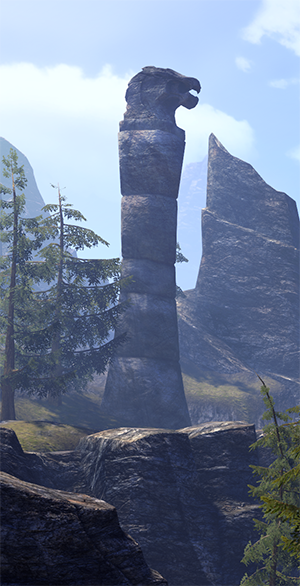 As I mentioned before, I am not new to instanced group activities in MMORPGs. And four-to-five-player dungeons are usually a stepping stone to larger group activities, but hopefully, they are also fun in their own right. Falkreath as a four-player dungeon is pretty good. The aesthetics deliver, and the mechanics are challenging without being overbearing.

Essentially, there are four bosses. The first being a siege mammoth, which is exactly what it sounds like it is. There is a mammoth attempting to break through the gates of Falkreath. Usually, the first fight is a gear-check, but it appears that this boss kind of side steps that. Regardless, it’s still a lot of fun. Not only is there a giant elephant-creature charging the party, but there are siege engines tossing fireballs at you. This fight hits its zenith when one of the fireballs hits the mammoth. Now, he’s a raging fire-beast, making things that much more interesting.

The second bosses are Reachmen spiritmasters and the summoned creature called Cermunnon. This interesting part of this fight was that you have to carry the spirits of the spiritmasters to shrines to raise the Cermunnon so that it can be killed. I’m not exactly sure how that fits in the lore, and it’s certainly possible that had I not been part of a group that knew what it was doing, we might not have figured out to move the spirits to the shrines.

The third boss went down really quickly. Obviously, it wasn’t because I was there. He was Deathlord Bjarfrud Skjoralmor. The significance of this fight is cleansing the spirits, which is done through synergy — by default hitting X — first gaining the purifying blessing from the urns and second cleansing the dead in the tomb.

The last fight is a claustrophobic fight with Domihaus the Bloody-Horned, a giant Bull-man who really likes two things: fire and yelling. The fun part of this fight will be hiding behind pillars when he shouts. In normal mode, it’s not an issue, but in the veteran mode, players will likely have to coordinate which pillar to hide behind so that the team doesn’t run out of them before the fight ends. 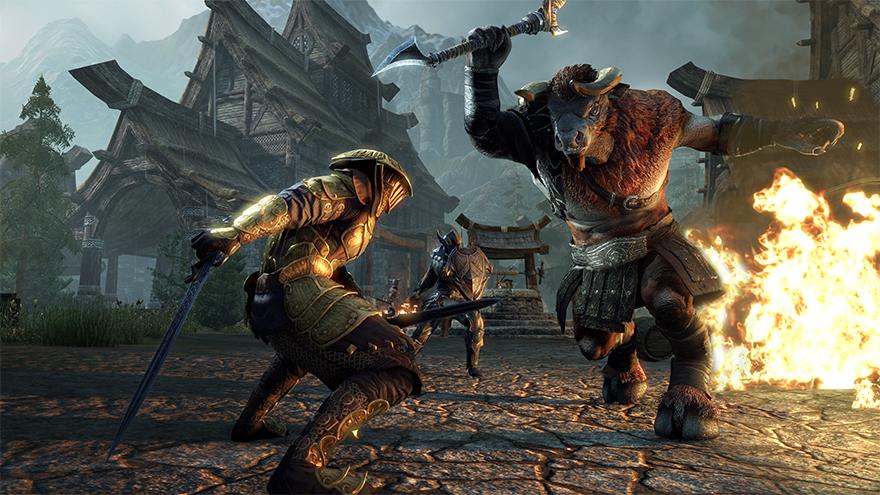 I don’t have a lot of criticism for this dungeon. Of course, veteran players will likely find it far too easy in normal mode, but veteran mode certainly seems to be challenging enough, if what the developers said is true. There are one-shot mechanics, for instance, and obviously, the bosses hit harder.

And if you happened to miss my livestream yesterday, then you can catch that below or head over to the Massively Overpowered YouTube channel.

What do you think of this kind of DLC that has little to no single-player content?

I think they are doing a good job of balancing content releases for various playstyles.

Now, I would have liked to have seen a couple public dungeons added to this DLC (a step below normal dungeons but they can still be challenging), but oh well. The majority of DLC content, aside from their one dungeon focused release, has a ton of solo content. Given that, and the frequency of content output, there is already lots to do and more will be out in a couple of months.

But, as noted, a pure dungeon DLC should cater to more than groups, given the solo friendly nature of ESO.

Oh noes.
Looks like we are going to get another Cradle of Shadows and Ruins of Mazzatun dungeon full of random group unfriendly gimmicky mechanics that will lead to pick up groups failing and disbanding half way through. And well be stuck repeating over and over again in chat the mechanics to every group we join but still failing.
“you have to carry the spirits of the spiritmasters to shrines” sounds like the poison that drops in ruins of mazzatun you have to pick up and lead the boss to the fountain. which causes so many groups to fail.
All the mechanics you describe sound awful and I am not looking forward to getting this dungeon in the random group finder :(
Its probably going to end up on my “instant quit when I zone in” dungeon list. Like cradle of shadows. As soon as I see that loading screen im out of there!

What do you think of this kind of DLC that has little to no single-player content?

To quote one of the, without doubt, greatest human beings of the 21st century: #SAD!

Now let me see this Hall.

I love playing through ESO’s dungeons from a design and adventure perspective. However, from a typical mmorpg perspective, they are sorely lacking. Due to the fact that the game has zero vertical loot progression, if the dungeon does not have the the set pieces you are needing for your build, there is zero reason to ever go through them a 2nd time.

Many of these new dungeons (and raids) include sets that arent good enough to replace the existing “best in slot” sets. Which means the life span of this new content, will be extremely short lived. Run it once to see it, or for a quest, and then never again unless you get it as your random for the daily (of which, many already have their monster sets, and dont even need to do the daily dungeon anymore)

I feel like ESO dungeons don’t get the praise they deserve.

Probably due to the fact that the great design and visuals (and even mechanics) of the dungeons, quickly get overlooked by the ridiculous grind required to get the set items you need from them, in the specific armor type, the specific armor part, with the specific trait on them.

After that 80th time though them, people tend to be sick of any enjoyment that might have existed.