END_OF_DOCUMENT_TOKEN_TO_BE_REPLACED
Have you heard of the planet Umbara before? The Star Wars fan who has seen only the movies will likely say no, and even if you are a BioWare or Old Republic Star Wars fan you will probably say no too. The only people who would likely know what Umbara is are those fans who watched the Clone Wars television series. However, any Star Wars fan who has seen the prequel trilogy has seen a character from Umbara. You probably don’t know the name, but you’ll know the face of Sly Moore, the bald, pale woman who stood next to Chancellor Palpatine in Attack of the Clones. She was his senior administrative aide, and more importantly, she was the bearer of his secrets.

Star Wars: The Old Republic takes a journey to the shadowy world in the next update, dubbed Crisis on Umbara. Of course, since this is the Old Republic timeline, we are thousands of years before the Clone Wars, and really anything can happen. That doesn’t mean that we don’t have clues for what to expect, however. Let’s discuss the things we know about Umbara and what we know the update is going to bring us.

A world shrouded in darkness

The Clone Wars episodes set on this planet started with Darkness on Umbara, which is admittedly redundant. The planet itself sits in the gaseous cloud called the Ghost Nebula. According to Star Wars lore, the light from the sun never fully reaches the planet, so it is constantly in darkness. However, the surface of the planet has breathable air. That doesn’t make a whole lot of sense to me, but we can chalk it up to space magic.

Despite the darkness, the planet’s surface is very interesting. We get a glimpse of it in the teaser for the next SWTOR update, but the best view of the landscape is in season 4, episode 7, of the Clone Wars. The clone troopers make a play for the Umbaran capital, which was then being held by the Separatists. During that whole episode, we see both the wildlife and the plants typically found on the planet. We see that the vast majority of the planet is covered in vine-like plant life that has an odd blue color. We know that there are flying animals called Banshees and a sarlacc-like creature called vixus. And all the fauna, no matter how big or small, evolved some kind of a bioluminescence. 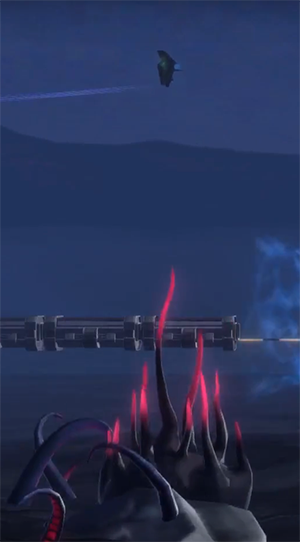 Physically, the Umbarans are another species that is practically human. In fact, Legends classifies them as Near-Human, which means that genetically they are close enough to human to interbreed with them. (Get ready for some Umbaran-human player characters, roleplayers.)

There were some physical differences, and the most notable one was the colorless eyes. Umbarans’ eyes are white. In fact, most everything about the Umbarans is colorless: their hair, their skin, and even their clothing. They do add a splash of luminescent bits on their clothes, however, just like everything else on the planet.

Where Umbarans differ the most from humans is not in their physical features, though. Because of the planet’s low light, the species adapted the ability to see in the ultraviolet spectrum. It’s unclear whether everything they see is slightly blue-shifted, but we know that the darkness of the planet was hardly consequential for the species.

Umbarans are also considered great lie detectors. There are a couple of factors that might lead to this. I mentioned the first one: ultraviolet vision. This means that they can see some of the heat fluctuations on the surface of many species’ skin. An astute Umbaran will be able to recognize this when a person lies. It’s also possible that Umbarans have an affinity for empathic abilities, which would allow them to feel what their subjects are feeling, making lie detection that much easier.

There are class changes and PvP changes coming to Update 5.4, but the most important things for me have always been the storytelling, group PvE, and aesthetic content. And guess what? Update 5.4 has all of those, and they all culminate in one flashpoint.

I would like to note for all of those solo-MMO players out there that the flashpoint for Crisis on Umbara does have a solo mode if that is your thing. It will probably be my thing for the first few times of running through it, admittedly. During the solo-mode, I hope to be able to catch the storyline, which will likely center on the mysterious traitor introduced in the Iokath storyline.

The teaser trailer for Umbara says that the traitor has been tracked to the train that you see our heroes jump onto. This train serves as the setting for the flashpoint; it’s all the content we know is on Umbara, and it’s also the stronghold that players can earn by playing through the flashpoint. According to Producer Keith Kanneg, the stronghold can be purchased with the Umbaran currency, which is earned by running the flashpoint. In a post on the forum, he explained about how many times we would have to run the flashpoint to get the stronghold: “Unless we change it before release, 10x for Story/Solo mode, or 6x for Veteran, or 3x for Master Mode will give you enough currency to buy the key [to the stronghold] from the vendor.” I’m interested to see how people receive that information when then stronghold actually goes live.

From my perspective, this update seems a bit light on content, but then I’m barely interested in PvP in SWTOR anymore, and the class changes mean very little to me at the moment because I’m not doing bleeding-edge content right now. But you’d better believe that I’m going to do all I can to get that train stronghold as soon as I possibly can.

What are your thoughts? Are you excited to see Umbara in-game? Have you always dreamed of in-game housing in the form of a train? Have you seen Passionately Casual’s “behind-the-scenes” commentary on the Umbara teaser? I’ll link that below. Let me know your thoughts in the comments!

Well at least with a train there’s a justification for the corridor environments.

More Class changes… how about more (adv) classes!? Heck even a new species? All this episode will do is serve to justify a new round of lockboxes!! Gghhhaaaaaa!!!!

Ok, now that’s out of the way, I’m Happy to have a reason to go back to TOR tbh, I keep forgetting to cancel my sub so i might as well check this out.

Off topic; Is it just me or is the autocorrect on the new Samsung galaxy completely inept?

To the OT bit – can’t say I’ve had many issues with mine, but I use the Google keypad rather than the native Samsung one.