END_OF_DOCUMENT_TOKEN_TO_BE_REPLACED
The big solar eclipse may have been yesterday, but today marks the beginning of Trove’s Eclipse! And luckily, this one will last much more than a couple of minutes. Today’s the launch day for the pixel game’s big expansion that devs have been showing off on streams throughout the month. If you’ve been following the news, you know that there will be some exciting editions to Trove once those expansion doors open. I sat down with Trion Producer Rick White, Senior Animator Ted Sanger, and Art Lead Robin Luera to talk more about these changes that White noted will offer something for everyone.

“For the Eclipse expansion,” he said, “we really tried to push adding new content for our three different segments of players: our beginning players, our mid-ranged players, and our power users and endgame players.” These new features include subclasses, a gem forging system, an expanded Shadow Tower, and the worlds atlas. Let’s dig in!

Worlds at a glance

Have you ever wanted to be able to see all the Trove adventure worlds and how they connect in one single glance? Well now you can. A new atlas shows all of the adventure areas that players can partake in as well as the progression order of the worlds. Clicking on each world gives you data about it.

More than that, however, is the map’s travel capabilities. If you want to go somewhere — say, the Shadow Tower — you need only click the tower on the map and teleport directly there. Of course, once you get to the tower, there are even more changes to behold! If, however, your character doesn’t match the requirements for a particular world, the connection will be greyed-out to visually signify it is unavailable.

Shadow Tower for all

Speaking of the Shadow Tower, it has gotten a few updates as well for this expansion. Perhaps first and foremost is the fact that although there is still a power limit for entering the Shadow Tower, that’s about the only restriction now. With Eclipse, players will be able to port directly to a communal tower without having to belong to a club with a crafted portal. The club portals will still take players to their own Shadow Tower, but this public one is accessible only via the atlas will give players the chance to group up with others. Luera explained that players will land right in a special lobby with its own chat that is perfect for congregating and making groups. The lobby has three gates inside, and while you can enter any difficulty from any, the idea is that folks will communicate and congregate. White noted that “The hope there is that people who want to do the highest difficulty level will cluster around that gate” and chat and group up from there.

The tower lobby also has the amenities that players will need, such as the Shadowy Market (to make those cool shadow-themed costumes!) and a key mold to make the keys to open the loot (as opposed to opening the gates). There are three different keys to create from materials that will drop in the loot chests: moon, shadow, and eclipse. Moon keys will open normal or hard mode while shadow keys will only open normal. Eclipse keys, on the other hand, will open any difficulty level, including ultra.

Two new bosses have also joined the Shadow Tower. You’ll face these monsters right after you defeat Pinata. There’s the five-headed Hydrakken (which the community voted on) that is stuck in the wall and spits green goo all over; as it loses health, it will start losing heads. Of course every time a head falls off the hydra gets madder and meaner! There’s also the Darknik Dreadnaught, which resembles a spider missing four of its legs. Luera shared that this boss cannot be backed into a corner to fight; it will always jump back to the middle. Just wait until it casts world ender — you’d better back yourself into that corner fast! “We definitely pushed for adding bosses that have multiple stages to them,” White explained, “and we’re tying to push more dynamics of trying to think about your team and the composition of your team as well as what subclasses you have [in order] to defeat these new bosses.” As Luera emphasized, “We wanted to make them a threat to every class, not just one.”

Sanger noted that the tower also added new elite mobs, and Luera added, “You definitely want to fight them because the elite mobs that we added will have a guaranteed drop of shadow shards, and that’s how you get your shadow cache.”

A huge change coming with Eclipse is the addition of subclasses. White explained, “We’re trying to give meaning to leveling all your characters where before you just kinda of leveled them for the fun of leveling them.” Once players reach level 10 they can select one of the other classes they own to be their subclass. This subclass will then offer a new ability as well as a stat increase. White noted that the effectiveness of the passive and the power of the ability will depend on the level and power of the subclass; that certainly gives players incentive to level those other classes up! 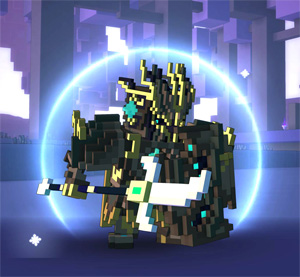 Just because this system is called “subclassing,” don’t think it’s subpar. Unlike games where you select one subclass and that’s it, Trove now allows you to swap out to a different sub class on the fly (as long a you are not in combat). You are never locked into any class and subclass combo; you can mix and match to see what best suits your playstyle and the task at hand. White emphasized that “This allows you to tailor your favorite class or classes and come up with different combinations based off your style of gameplay.” Luera did point out that you cannot subclass the same class, so no Candy Barbarian times two. Subclassing is also not available in PvP.

How many combinations are there? With 15 classes, and each one able to subclass with the other 14… that’s plenty of options! And these options will all be easier to see: Sanger noted that the character select page was changed to show the power rank and level of each class at a glance. Luera quipped, “Now you don’t have to swap to every single character to see where your high PR gear is!”

I might have saved the best new feature for last, or at least the most anticipated by the endgame community. No longer will players have to wade through RNG gem after gem looking for a good fit: Gem reforging will allow players the improve wanted stats on their given gems as well as reroll unwanted stats. You can ultimately build your stats up to max. White explained, “Eventually, through gameplay, I can have all my modifiers [can go] up to 100% [and] make all your gems perfect over time.”

That, however, will take time as it involves many, many resources. As Sanger put it, “Realistically you only have about two stat respecs a week.” Of course, they all agreed that it is best to start building on a better gem as it will be cheaper in resources to get the stats to maximum.

An important note about rerolling stats is that although the new one you receive is random, you will never get the stat you are replacing, so if you think you might want that stat back, don’t change it! However, you may be happy to know that any upgrades in that slot’s power will also translate to the new stat, so you will never waste any resources if you change your mind to put something else on the gem. The percentage increase will remain, although the range of the stat will still have an element of RNG.

If you haven’t played Trove for a little while, you may not know that the daily reward chest has been replaced by a daily token. Since the Megalithic update, players claim a special token every day that they log in during the month. Those tokens, which are unique for the month can then be used to purchase special items that month. The “boon” (which is basically the same as the old RNG daily chest) costs one token and can be bought daily. Alternatively, players can save up and buy a special mount or wings for nine tokens, or save 18 and nab that month’s epic reward. What is considered epic? Well, last month it was a dragon! Those who log in every day can easily buy all three items in a month, but those who miss a few days might have to prioritize. If you missed too many days, Luera noted that the monthly items will also be available in the store for a limited time after the month is up.

While this revamped daily reward system is not new for Eclipse, there is one little change that is. Luera explained that these chests have the chance to reward Bound Brilliance, which is the crafting material needed to augment your gems in the new reforging system.

these chests have the chance to reward Bound Brilliance

Either the RNG prioritizes this item, or I’ve had a strange string of rolls, because this is the only thing I have gotten out of the chests now.

Well that was right what they said, but maybe it is the only, or possibly the main reward. Wonder if there is a chance for something uber?

I want to go back to this game, but 2 MMOs right now is more than enough, but hopefully soon i’ll spend few days with it, SWL can always wait while i play other games :-)

One thing i really like about Trove: simplicity, i know MMO can have so many systems, large worlds, but there is a place for games like trove, simple fun, is there other MMOs like that?

the eclipse was absolutely breathtaking. Tennessee was in the path of ‘totality’ and it was amazing how dark it got at that moment. Street lights came on. Cicadas starting making noise. Dogs barked in confusion. For just a few seconds you could look at it with the naked eye – a black hole in the sky with a white corona around it. A once-in-a-lifetime event. Quite humbling. I felt my soul sing and praise in my heart.

Check out the Final Fantasy XIV: Endwalker trailer… by way of...