END_OF_DOCUMENT_TOKEN_TO_BE_REPLACED
Trion is on a roll at a Gamescom this week: It’s brought ArcheAge 4.0 to the party.

“Slated for release in North America and Europe later this year, ArcheAge 4.0 will include new features intended to make the game more accessible than ever before,” Trion says in its press release. What features? Oh, nothing much… just a 20-man ocean battleground for your multi-person navy ships, an open-world raid finder tool, a less annoying gem system, and a huge overhaul for crafting, including a new crafting UI and crafting quests. Maybe not a huge surprise if you’ve been following the game overseas, but great news for the west nevertheless. Check out the content outline and new trailer, and stay tuned for our report from PAX next week, when we’ll be meeting with the Trion team in person! 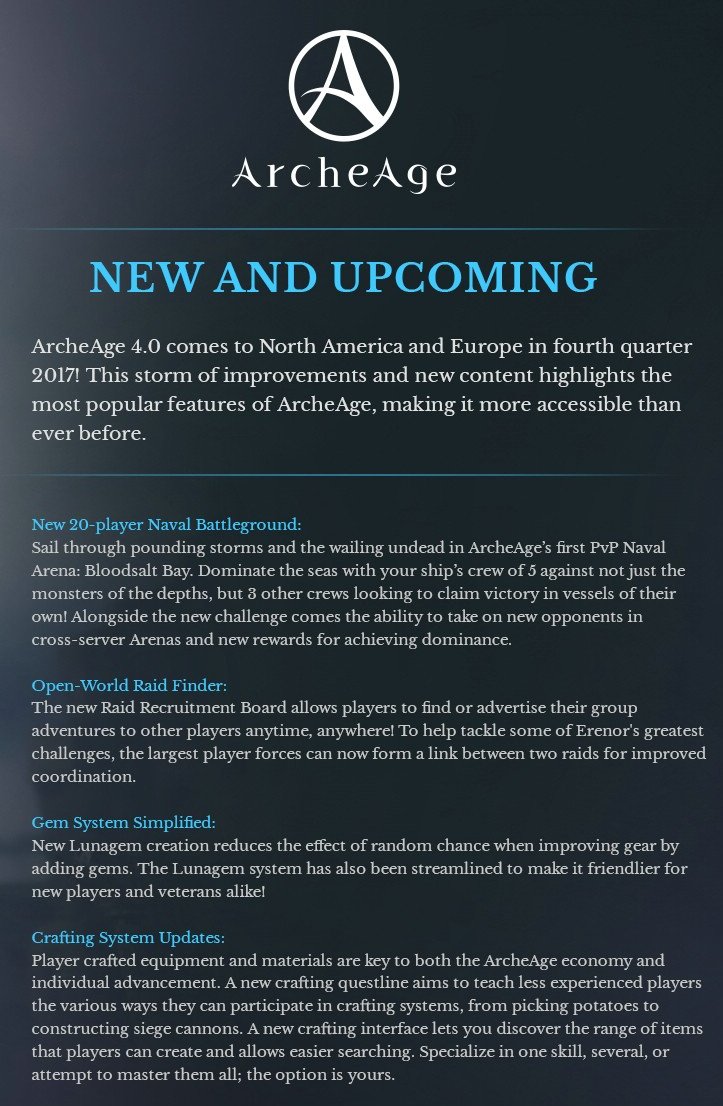 Could have been a massive mmo :o with tons of players PAYING sub fee.
But they prefer to have their company reputation being destroyed and got the cashshop in …. Dear ArcheAge Alpha I love you and will always miss you! PS: I miss my 150 EUR as well :(

We miss you Archeage Alpha :(

“Trion is on a roll at a Gamescom this week”

Imma need less lies in your reporting Massively, Trion is never on a roll, unless we are counting downhill.

So much potential squandered on so much RNG, too much benefit to ganking, and too little reason to just enjoy the game play in most ways.

If crafting didn’t feel incredibly restricted by the labor system and was otherwise more specialized, if PvP was a little (er, LOT) less… beneficial compared to the risks taken, and if the advancement hadn’t been so much about spending a few thousand dollars to ‘get lucky’ this could have been a good game.

Which is the fault of XLG, but Trion did import such a mess. :(

When time is literally money, it was a huge rip-off for the game to randomly generate your goods for you and for some of those goods to be dead-ends that you could barely sell for profit and couldn’t turn into higher end gear.

Then there was the upgrade system that was also RNG-dependent and one wrong roll and you lose thousands of gold. You had to have nerves of steel and a love of gambling in order to specialize as a crafter and having neither I just stopped playing the game.

Hey, just wanted to stop by and let you know that we changed the crafting system to leave that old RNG nonsense behind. Now you can always upgrade your gear as long as you have the proficiency, and your previous piece of gear is regraded high enough.

We also largely improved regrade rates so it’s much easier to regrade now. Yes, regrades can still shatter your item, but only at Celestial grade or above. Most of the crafting system doesn’t require Celestial grade to upgrade, except for the highest level pieces (Ayanad and Erenor).

And, finally, we introduced a new item called the Transmuter into the game. This allows you to “recloak” a piece of your armor and then uncloak it as a new element. So, instead of “please, please let me get the right stats,” you get to control what stats you get on your gear.

The team at XLGames has been working to reduce RNG in the game overall, so look for more improvements to keep coming, such as the Lunagem changes in 4.0 above.

Way too little, way to late. The time to understand your market is at the design phase, not after launch or during maintenance.

Hey, let’s give them credit for at least getting through to XL that the RNG and pay to win aspects were troubling over here… maybe next time XL will be more willing to work with changes to this for foreign markets…

More people don’t like Apex, can be sell in the auction house and more people don’t like regrade charm can be only purchase in the cash shop and pay player can sell this item in auction house. Why you guys removing regrade charm in the guild shop prestige before? Fresh start server has 8k gear score. Youtuber, streamers from twitch and blogger request to have a fresh start server subs only, without apex sell in auction house. I see from kooncoon video in xlgame meeting 1 guy crying complain RNG box. Even devs from other game complain about this RNG box. Please make AA great again!!

I hated the labour system, especially since it was basically a cash shop avoided thing, and since all ways to gain any wealth pretty much relied upon it.

The RNG was bad, but is supposedly fixed, so at least they realized that was a big issue.

Really would like to come back and try this game, but while the constant chance of random PVP doesn’t bother me, the idea that I’m going to get irresistably ganked by someone who simply spent more MONEY than I was willing to, is annoying.

So the only real feature is a new naval battleground? The rest is just crafting adjustments. What do they need a raid finder for? The game only has 3 end game dungeons. Their 3.0 patch had new races, new zones, and lots of other stuff….

The less annoying gem system is so good that nobody in their home region (SouthKorea) is using it. They admitted in an interview that it wasn’t popular and that they would be changing it again in a future version.