END_OF_DOCUMENT_TOKEN_TO_BE_REPLACED
I questioned BioWare‘s delay of the latest update for Star Wars: The Old Republic. According to a post on the official forums, the team decided to delay the launch of Crisis on Umbara because of a bug that could “prevent a substantial amount of gameplay when a player experiences it, from not playing the intro cinematic to not allowing re-entry into the instance.” Before reading the explanation, I joked to friends about the delay, saying that something must have happened to break the cash shop, otherwise, BioWare would never delay an update. It would just be released and fix it later in a patch.

But since it was delayed for legitimate reasons, the update should be bug-free, right? We will talk about that in a bit.

BioWare did eventually release the update on Thursday morning, actually. And I spent all of yesterday playing through the instance on different classes in story and veteran mode. It wasn’t too bad, and it’s certainly worth tossing a few bucks at BioWare if you like a little bit of group activity in SWTOR. Let’s break that down.

By far, the biggest gripes I’ve heard from people about this update have been the story. I don’t like to spoil things this soon after the patch, especially since I’ve told you that it’s probably worth paying a couple of bucks to play through it. However, I will tell you that the story is probably the weakest part of this update.

After the events on Iokath, we discover that someone within the Alliance has betrayed us. We do find out who it is. If you’ve seen any of the playthroughs of the update, you’ll know that we find out the traitor’s identity rather quickly. It is exactly who people said it was going to be, and it’s the same traitor regardless of choices you’ve made.

I’m not on board with the choice the writers made, but this one flashpoint was not the whole story. There is a big to-be-continued sign at the end of the flashpoint. I will withhold my judgment of the arc until we know everything. However, that won’t stop me from judging the other parts.

My dark-side Sith Warrior is trapped by the traitor at one point but goes so far as to Force-choke the traitor on the other side of the trap to prove that my warrior could kill the traitor at any moment. Then, instead of just killing the traitor, my warrior inexplicably lets the traitor go. It’s the Malavai Quinn situation all over again. The traitor is saved by +10 to plot armor.

Then I also have to wonder about the setting. Don’t get me wrong; I think Umbara is great, but in Clone Wars when Umbara was picked as a setting, the planet played a lot into the everything about the story being told. In this update, Umbara appears to be an afterthought. I can literally think of nothing that happens in the story or the mechanics of the flashpoint that could not be done on pretty much any other planet. Even the Umbarans were just Ratattaki with slightly different tattoo textures. 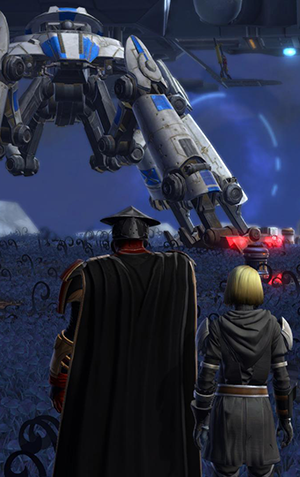 Three main bosses and one optional boss sit in the Umbaran flashpoint. The first is a pair of Umbarans named Technician Canni and Shadow Assassin Elli Vaa. And their mechanics are fairly straightforward given their names. Canni will set and upgrade turrets, and Elli Vaa will disappear and reappear at random. Although there is a slight mechanical change when one dies, it’s not a Romeo-and-Juliet fight. Taking out Canni is usually recommended because the DPS of the turrets can get unwieldy after too long, but I’ve been a part of groups that have done it both ways. The main thing to be wary of is Elli Vaa’s knockback. It is possible to be kicked off the train to your death if you are caught in it. Thankfully, there is a telegraph on the ground to alert you.

The Alpha Slybex is next and is completely optional. My first couple of times through, I didn’t even run into this boss, but after not getting enough currency during those runs, I realized that I must be missing something. This boss isn’t too difficult; I would say the biggest thing to be aware of are the adds. Intuitively, you’re going to want to kill them first, but don’t. It enrages the main boss, and you will certainly die.

The spider tank can be difficult and a fun fight. It’s not to the level of raid bosses, but it does require a good bit of coordination and thought. Add management is likely the biggest unexpected mechanic. The adds can become too much if they are not dealt with quickly. Most most of the time, it’s impossible to completely stay out of the AoEs, but be kind to your healer and get out as soon as you can.

There is one bug that made me want to pull my hair out. I encountered it only on solo mode, and it’s probably because I was trying to sneak past everything. In the last train car before the boss, you can aggro the turrets on top of the car if you stealth, and you will not be able to leave the train car. It took me a bit to figure out what was happening and a bit longer to fix it. Eventually, I was able to drop aggro by going to the opposite end of the train car and stealthing. But I had to come out of stealth before taking a step forward. Otherwise, the turrets would aggro again.

The armor earned from the flashpoint currency is actually all right. I kind of like the helmet, and if I don’t use it on my main character, I might use it on another character. I’m on the fence about the reusable stim schematic that you can buy from the other Umbaran vendor, but I honestly don’t know how many credits were actually earned by selling temporary stims. Likely, this will have little impact on the game’s already cash-shop-centered economy.

BioWare did change a small change with the shadows this update, adding enhanced shadows. I didn’t notice an FPS change, but there is a slight difference in the player shadows. However, I didn’t notice a change in the more glaring shadow issues. I put a picture from Alderaan here to show you what I mean. Let me know if the comments if you can tell which has enhanced shadows and which doesn’t.

Although I do have a few nit-picky issues, I did find Crisis on Umbara enjoyable. And I’ve played through the flashpoint enough times that it’s worth the month of subscription that it would take to get it. I don’t believe that anything about Update 5.4 is enough to make players want to come back in droves, but it’s good. It’s clear that BioWare spent some time on its design, and I hope it continues to put out content like this in the future.

Essentially once Mythic had wrested de facto control from Bioware, they looked at Quinn (and all the healing comps) and basically removed all comp deaths from the story. Of the healers, I believe Quinn, Elara, Doc, and Mako had potential deaths built into their stories.

It wasn’t til they made any comp able to do any roles that they started killing off chars.

I agree this whole troped shit is annoying, but it is in literally every game and 99% of the movies out there.

“The traitor is saved by +10 to plot armor.” -Larry Everett

I really dislike that, it gets overused in a lot of mmorpgs. Good read on the article Larry. Sooner or later I’ll get back around to buying and running through the new content. At least once, just not sure when. SWTOR’s pull is much weaker for me during the last year plus. :/

Edit: Oh and is the left shadow the enhanced one?

They do it all the time in SWTOR. How many times did we have the boss beat in this game only for ‘things’ to happen and we suddenly lose ?

Enhanced shadows is actually some form of AO, while the comparison is ok it would be better to show a picture of a scene, rather than your feet.

Larry, Umbarans are Ratattaki without tattoos, BW are not responsible for that one.

I’m not surprised that a raider liked it, but i hate fights with adds, they are boring if you win annoying if you lose, instead of making the boss mechanics interesting, they make you swat flies constantly while dealing with the boss, good for raiders annoying for anyone else.

I had to do this with Lana, no choice of companion on the first playthrough at least, this isn’t a flashpoint, it’s a KOTFE chapter.

Those turrets you struggled with (i had the same problem), are 3.4M hp bosses, any of them alone has more HP than all the other bosses in the FP together, and are guarding an invisible wall that might allow you to skip the trash mobs before the two bosses, but with the wall there i’m not sure what’s their point, maybe they make sense in harder modes.

On the upside, thanks to the way they refuse to fix the masks on the newer hairstyles, i can now have a Chiss with white hair.

Generally when comparing two photos side by side, you put the “before” on the left and the “after” on the right so you could have done the opposite as a ruse. But you would have known that I would know that, so I can clearly not chose the picture on the left.

However I am a SWTOR player who favors Warriors and Bounty Hunters, and I am use to approaching problems with physical strength. Those who use brute force favor their dominate side, in this case my right hand which you would have known, so I can clearly not chose the picture on the right.