If you’ve followed its history over the past half-decade or so, you might have noticed that the action-MMO Dragon Nest hasn’t had the easiest go of it. It was shut down in North America a while back and then relaunched last year by developer Eyedentity Games.

Now Eyedentity is expanding its global influence on the Dragon Nest brand by taking over operations for the MMO in southeast Asia from Cherry Credits. The latter company will stay on only to provide customer service support.

As part of the move, Dragon Nest SEA shut down and will relaunch on September 7th in the region. Affected players are asked to create an Eyedentity Games account and link it to their old Dragon Nest one to transfer their characters and progress over.

Stay tuned for a cheering message! 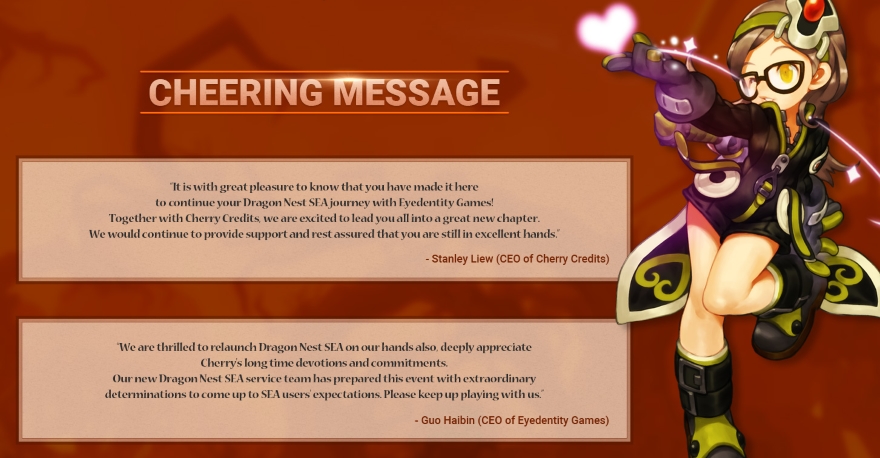 The funny thing is Dragon Nest is actually a far better game than other games being released now in the same type of genre. But the other ones get all the players because they’re new.

I really don’t know what players have as a whole about not playing a game that’s a little older, if it’s already existed a while. Games have to do these big relaunches starting over to get people to come play them, even if the relaunches are sometimes not as good in some aspects.

If you like action games it’s a really decent game with a lot of different character types and even real story lines to follow. Yes, it’s one of those hub based action types, it’s not like a full MMO where you’re seeing everybody outside in the wild, but if you like these action and hub based games it’s really a very decent game. Why can’t people try out a cool game without it having to relaunch?

At least transferring the characters over is a nice gesture, that’s pretty cool.

The Daily Grind: Have you ever fallen in love with MMO-ish...