Atlas Reactor has come a long way since it first opened its doors. When I very first tried the alpha back in February, there were only 13 freelancers to choose from. Now, that number has more than doubled. I talked with Lead Designer William Cook at PAX West about the game’s growth, including the 30th freelancer, the community-requested freelancer that will be making its appearance, a new game mode, and lore.

Although I have never been one to play a frontline character, I think this newest freelancer joining the ranks next week may be my first. Isadora is actually the first hybrid freelancer (though likely not the last) for the game; she alternates between frontline and firepower. But that’s not what is drawing me to her.

“She’s a little evil genius hamster in a ball,” Cook explained. “When she’s in the ball, she’s a frontline. But that ball is mostly shields, and when those shields get depleted she gets knocked out of the ball and she runs around scampering as a firepower.” In this state she can do a great amount of damage from range, but she has very little health. She can re-summon the ball and jump back into the frontline position. One look at this character and I just knew I had to try her. Simply stated, Isadora is adorable.

Is Izadora unique in her dual roles, or is she just the first of more hybrid freelances? Cook answered that it is likely. Noting the uniqueness of Nev:3 and Isadora, he said, “You can see us experimenting more and more.”

Following Izadora, the 31st freelancer to join the ranks will be one the Atlas Reactor community has been requesting for a long time. Announcing the Dino Lancer — no joke! It may have started as a joke when the now community manager (before he was CM) asked for it and the community chimed in to keep asking, but the dev team is delivering. Dino Lancer, a frontline character, will be the boss of the animal hybrid characters. He’ll join the game in season four coming up this fall.

Have you ever played a match with someone who insisted they knew every class and could play better than anyone? Well now is their chance to prove it! Cook described the game’s upcoming new mode, which is called Fourlancer. This gimmick mode is 1v1, putting the control of all four freelancers on your team in your hands. So as Cook put it, “No more complaining about your team.” You’ll have to plan all the tactics and make all the moves. Luckily, there will be more time to make said decisions for all four freelancers.

Players might really be able to find out who the best of the best is. Cook stated, “We actually are toying around with making that a ranked mode if it is popular enough. It doesn’t need a lot of people for matchmaking, and a lot of people want to prove who the ultimate tactical genius is.” 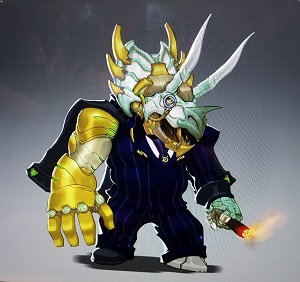 One of the things Cook said he is liking about design now is how the freelancers are becoming more interconnected. “A lot of these characters are now much more tightly threaded from a lore sense,” he explained. And the lore of the game has been growing. “Our content season is a story of chapters that grows each month until the final month,” he explained. Every season of play offers a full story line that dives deeper into this world and the freelancers.

Is it worth checking out these stories? That’s a personal decision, but as for Cook, he noted that “because of these stories, I care so much more about these characters — even the older ones.” Players who want to check this out can read all previous stories in the UI. Currently, this is the only way to really obtain the lore of the game. However, that may be changing: Cook said that the team was looking for new ways to use the lore beyond just chapter text, but that was all the detail he could provide.

Massively Overpowered is on the ground in Seattle for PAX West 2017, bringing you expert MMO coverage on Ashes of Creation, Ship of Heroes, Dual Universe, and everything else on display at the latest Penny Arcade Expo!
Advertisement

It kinda looks like a cross between a gerbil and a chinchilla.

The most recent lancers have been pretty icky from a design perspective but I kinda dig that dino guy.