When I first went for my hands-on appointment to try out Amazon Game Studios‘ upcoming mythological sports brawler Breakaway at PAX West, I didn’t realize I would break Amazon! All I did was touch the B key as instructed, and everything went dark: The circuits blew. But once all the computers were back online, I was able to jump in and give the game a test run, and I am glad I did.

Unlike brawlers or arena shooters that are just, you know, shooting other people, this game focuses on the aspect of a sports game. While you can win the round by wiping all of your opponents at the same time, the two other win conditions involve the ball; either you score a goal or you keep the ball on the opponent’s side of the field when the four-minute timer runs out. Perhaps because of this sport team aspect, I got more interested in Breakaway and look forward to playing it more.

I believe it very much was this sports aspect that drew me into the game more than many others of the genre. One of the key things I have learned and taught as a soccer player and coach is passing the ball. This is exemplified in Breakaway: Players move slower when carrying the ball (hence become an easier targets), so frequent passing is pretty key. To pass, however, your teammates have to be prepared to catch by holding down their right mouse buttons. I definitely enjoyed the passing aspect. Team communication is also pretty vital, and there is definitely no time to type to your team; voice is very helpful.

In discussing the game with devs (during the black-out downtime), they talked about how they wanted the game to be fast-paced and competitive, but still fun to watch as well as fun to play. There is a fun slide mechanic on declines s well as the usual dodges and dashes. The game is very much about movement across the field. You’ve also got to keep track of where the ball is, which obviously changes incredibly quickly. 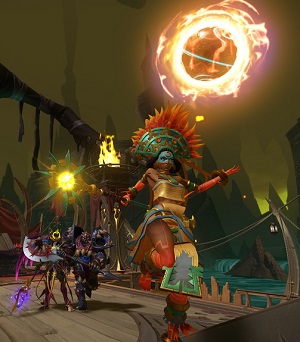 Although I only got the briefest of introductions to the characters, I found many of them interesting. I settled on a strange looking creature called Sai, the mad lightning sage. I didn’t remember to use his defense skill often, but I got plenty of us out of that AoE!

One of the aspects that I kept forgetting was that each character gets to place down a specialized buildable once every round of the match. Mine was a little tower that created a no-jump zone. When I finally did remember to place it, I was able to keep the other team from jumping up to the goal. (Fun fact: There’s a pretty sweet dunk move if you slide into the goal and then deposit the ball.) Other classes drop traps, lasers, turrets, and stuff like that.

Before every round and whenever you die you get to buy special buffs with the goal you’ve earned in the match. There is armor, health buffs, and so much more. For my character I actually purchased extra damage against deployables, so I was able to go around blowing up the various traps the opponents set out.

Although there are only three maps available during alpha, there will be more. How many more? The devs haven’t decided. But each map actually supports different play tyles. One is more about team fighting and deployables, another is wider so it becomes more running, and the third is a combination of the two. What the devs said they wanted was variants that require players to think about different strategies and counter-strategies.

Sounds like Huttball without the best combat animations and superior ambience of SWTOR.

That said, I think it could catch on for the millions who didn’t play SWTOR and to whom this type of “Huttball” is brand new so I expect it to succeed.

I would love to be wrong, but Amazon’s seem like big budget prototype-like game concepts for things someone thought would be good for streaming on Twitch and testing viewer interactivity tech.

I mean, of course that is what they are. They didn’t buy Twitch to sell video ads. The impression I get from what we know about their games is that they are designed for broadcasting and if you aren’t broadcasting or participating to be with your favorite influencers you are pretty much just a body for Twitch streamers to shoot at or use in whatever way the game allows.

I really really want New World to be more than that. Their other two games I couldn’t care less about at this point.

My sentiments exactly, except… The better the other games do, the more likely Amazon will be to continue development of New World and that Smedley game – which I expect to be Amazon’s answer to Destiny and Anthem.

They should really throw us a few bones about New World, though.

I know it’s years before launch, and on its own way its good that they have these huge resources so they don’t have to throw out pre-alpha / alpha version (we’ve seen enough examples of sausage being made in recent years, and it isn’t pretty) but they could still give us the occasional image and piece of lore…

Until we get a big publicity push I have this nagging feeling that they could just cancel New World on a whim and that makes me root for Breakaway and Crucible. The better they do, the safer New World is.

Said noone, nowhere, ever

My one and only game of Huttball was the first thing that come to mind here too. Balls and murder don’t mix.

huttball was horrible. To mimic it is just plain stupid.

Fuck, what ever happened to New World?

They cancelled it and used the assets to create Breakaway hehe ?

A video game for industry analysts!