Although I’d recently played a bit of Dauntless, I was looking forward to my hands-on at PAX West. That’s because I was primed to see — and hopefully face — a new behemoth. I also spoke with Phoenix Labs’ Encounter Designer Reid Buckmaster about development, reception of the game at the convention, plans moving forward, and of course, behemoths.

One of the unique aspects of fighting behemoths is the fact that you can break off physical pieces of the boss to weaken them and score specific loot. Currently in the beta, there are around a dozen different behemoths, according to Buckmaster, but each of those has different variants between easier tutorial ones, the base versions, and then hard versions that include different attacks and attack patterns. “All told with the variants we have I believe it’s 27 different versions of encounters in Dauntless right now,” he said. “Every encounter has a little something new to encounter.”

Buckmaster explained that the new behemoth, Nayzaga, is electric-ether-aligned and has a puzzle to its encounter. Without wanting to give too much away, I’ll just say that you aren’t spending all your time beating on just the behemoth itself. And a challenge it is: Sadly, the timer ran out on our group just before we would have gotten the kill. 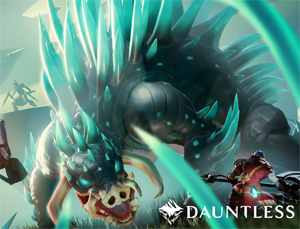 Down the development road

If you feel like the town in Dauntless is kind of dead, you aren’t alone. But there are plans to flesh out the area and make it feel more alive. Buckmaster said that more places to undergo cosmetic customizations will be added, along with places to go to set up guilds and the different faction groups players can join with and do tasks for. He added, “We’re going to go have other fun stuff like a tavern, and maybe a little dog running around. We want to make it feel more alive. Right now it is effectively our lobby, but it will be a living city for our slayers to hang out in.”

Although for the alphas and betas the focus is on the combat and the encounters, Buckmaster told me that the islands will be expanded in different ways. This includes the possibility players interacting with specific elements that might change the course of a fight, things that offer shortcuts around the island, and even secret resources. Although as he said the main focus of the game is “untangling the puzzle that is the combat with each of the behemoths and becoming a master of it,” he emphasized that the team is finding ways to allow matchmaking so that those who might want to spend more time exploring the island and getting resources won’t get grouped with those who want to just swoop in, kill the boss, and move on.

Additionally, more weapons are definitely coming to the game. In fact, the fifth weapon, which happens to be the first ranged weapon, is in development right now. Unfortunately, Buckmaster said he couldn’t go into any further details about it. More armor and lanterns are also being developed; these will allow players to spec themselves into different roles, as opposed to choosing classes as come are more used to traditionally.

The launch version of the game will have a full campaign, complete with cutscenes that will tell the story of Dauntless. After completing that, Buckmaster said that players can then fight harder versions of all the behemoths. More story and more encounters will then land after that first campaign.

Closed beta just started, and when I spoke with him on Monday, Buckmaster said that the team received more sign-ups at PAX itself than the team expected. “The response has just been overwhelming,” he said of folks coming to check out Dauntless at its booth. “It’s been really great.” Those folks will join a community that Buckmaster called “a really great, positive core community that’s really doing a good job of helping players that are brand-new to Dauntless or to the hunting genre get into the game.”

“We’re very proud of our community and also of the social aspects of Dauntless,” he said. “That’s something we’re really trying to lean into is to make it a nice, strong social experience — a place where people can make friends, start guilds, have fun together, and create stories together.”

FAQs from PAX
————————
Console: No plans. Never say never!
Weapons: Two more in the works! Even more in the future.
Open Beta: This year! pic.twitter.com/ef6ISJTjuT