If I had to pick a PAX West booth to give an award to for sheer fun factor, it would go to Digital Extremes’ new board/card/computer game combo The Amazing Eternals. (I’m not alone: The booth also got an award from a magazine!) The retro bowling alley vibe — complete with bowling shirts, orange shag carpet, and wood paneling — combined with the awesome old TV console frames on the monitors just screamed funky and fun.

Did that same vibe translate into the game? Yup. It was prevalent when I got to dive in and try a couple of matches. Admittedly, the first one was less fun, but that’s because I jumping in totally blind; the enjoyment spiked up quite a bit more after talking with Lead Game Designer Allen Goode and actually learning about the game. And now you, too, will have that same info so you can have a blast in your matches — or at least know better what’s going on! 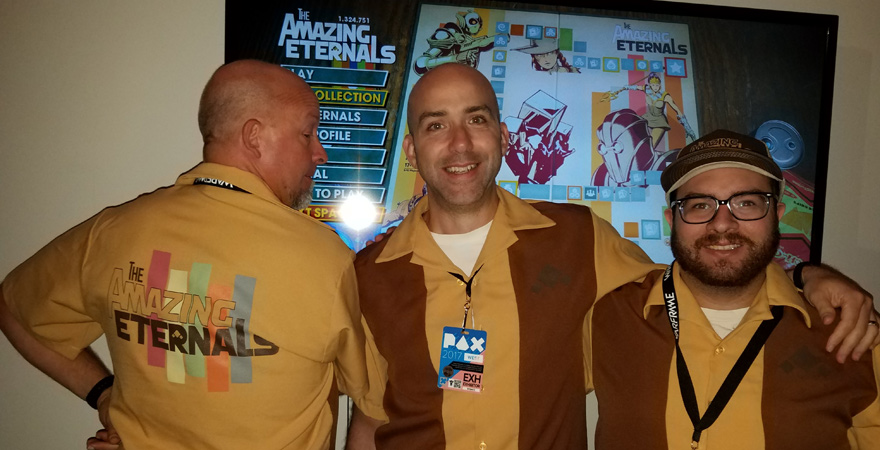 There are a number of collectable card games and hero shooters out on the market now, so what makes the free-to-play The Amazing Eternals special? What sets it off from the crowd? It actually combines multiple elements together and then throws in a few twists. For one, while you build your deck for each character, you also determine the order in which each card will be played. That’s right: no RNG! Two, if you don’t like the eternal (character) you selected, you just choose to switch to another upon death. Yes, you heard that — you can change characters mid-match. And three, after you finish playing your match, you have a piece that moves along a game board, and you can earn goodies depending on which spaces you land on.

Let’s start with the deck. The cards are everything from new weapons to boosts and buffs to special actions. These cards allow players to create specialty decks that all work together, or they can just throw together favorite ones. Each pre-made deck consists of twelve card, and Goode noted that players can have two of the same card in a deck. The cards are placed in the order players want them to appear, with up to three cards showing at a time.”There’s nothing worse in a competative shooter than getting screwed over by some random RNG,” Goode stated. “They way you build your deck is exactly perfect for you every time. It’s skill based: People want to win because they are better, not because somebody got screwed over by RNG.” In other words, you can’t ever blame the cards for a loss – only yourself!

Each card, once drawn, has a timer that must expire before it can be used; however, any of those three can be used in any order if the timer is up. Cards can be used to completely change the playstyle of an eternal. Goode showed off how the giant tree tank Bristle could be melee with his Carnivorous Hands and Log Club or ranged with Boulder and Spear Seed. (By the way, Carnivorous Hands is awesome — giant plant jaws chewing on the enemy!) “The point is,” he said, “is that you’re not canned into one specific type of play style; you can actually tune your deck to give you a lot of really different options.” Some cards can also synergize really well with or help other eternals, such as Ray’s card that can lift another eternal high in the air to snipe enemies.

As odd as it feels to start with, the ability to change eternals in order to react to the situations as they arise in the match is quite neat. After sniping a few folks in the head with a rifleman, I ended up switching over to the healer (granted, I thought she was going to be a damage-dealing sorceress at first, but I like healing!). With so many different eternals and so many more decks, my mind spins thinking of all the tactics that could come into play in one single match. 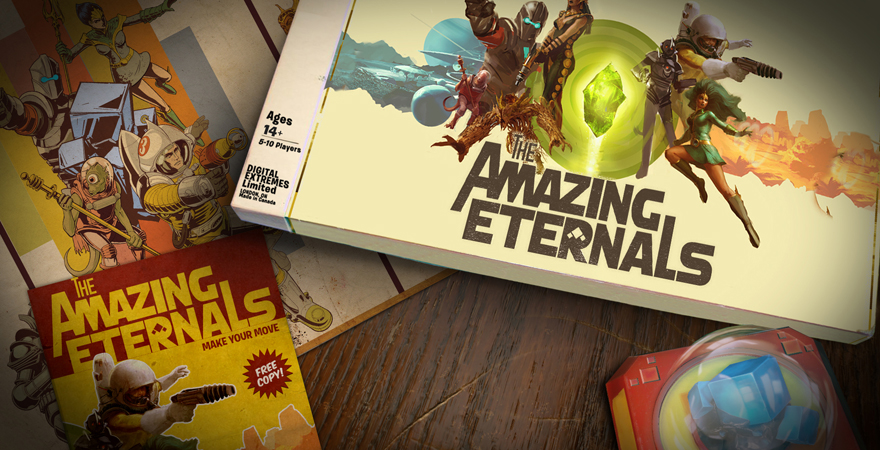 Now let’s delve into that third aspect, which deserves a bit more explanation. The Amazing Eternals is a game within a game within a game. It’s the card game hero shooter within a board game within a computer game. The whole premise behind the game is fascinating story: It’s very Jumangi-esque. Goode described the inspiration of The Amazing Eternals as a board game hailing from the ’70s you find buried deep in your parents’ basement among other weird, awkward games that aren’t being played anymore. It’s covered in dust yet strangely alive. In fact, there’s a crystal/keystone on the side that’s glowing and spinning, and “you find that when you sit down with your friends to play the board you all get sucked into this other dimension where you all take the role of one of these eternals, and then you end up fighting for the power that’s caught within these keystones and you bring it back to the real world.”

In one game mode, you grab that power by siphoning it from the keystone control points inside, so you defend your own and try to take the other team’s. Another game mode is simply get the most kills. Winning those is what makes your piece move along the progression path of the board. Then, depending on where you land, you can earn different game pieces, card packs, ego items, and more.

Goode told me that once you finished the first game board, you move on to the next one. The boards will all be different. “We have plans for all kinds of crazy ideas for boards,” he shared. “We even have ideas for how you’ll be able to manipulate how you progress on a board — multiple paths, different things to unlock depending on the direction you decide to choose to go. We have a lot of different ideas.” (If a Chutes and Ladders-type version shows up, you can thank/hate me for the idea!)

Inspired by the old comics

The eternals themselves, like the game board and the match maps, are inspired by the old ’70s comic styles, according to Goode. He noted there are four themes that drive the art direction: super science/science fiction, super hero, horror, and western. The goal, Goode said, is to eventually have enough eternals in each genre fill all the roles of tank, assault, support, and control. And more than just look the part, these eternals — especially the superheroes — will have the same over-the-top silly powers that those old comics were known for. For instance, the healer Nautica is very Poseidon-like, riding around on a manta while calling forth flying whales to quite literally rain healing waters down on the team.

“We own that. We love that,” Goode emphasized. “We love that bizarre stuff they used to do, and we want all of it in our game because it really is special.” 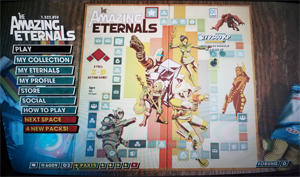 What is showing in the closed beta is not the the finished product. Goode talked about changing the UI, making the card descriptions more new-user friendly, creating a practice mode to learn about/test eternals and decks in, and making other adjustments based on player feedback. “The whole point of even being here [at PAX] is so that we get the feedback and bring it home and make improvements,” he said.

How long will the closed beta go? “We’re going to be in this [closed beta] state for quite a while until we are happy with the amount of content that we have,” Goode told me. “And then eventually we will open beta and open the gates.” Currently there are only six eternals, two maps, and two modes available to play. “We’re already working on new modes, and we have a new map that is coming out in a couple weeks,” he added. “We just have enough content where it’s cool to start to show it off, but it’s a fraction of what we need before it can really be out there.”

If you’d like to see gameplay for yourself during closed beta, keep an eye out for streams on OPTV and watch for future giveaways here on MOP, beginning with this one for all our readers who read this far!