You don’t have to be a massive MMO studio to have a big showing at PAX West – Intrepid Studios proved that. The indie studio developing Ashes of Creation had a large booth with a giant TV broadcasting videos, hands-on demos for players to see what the game is about, a merchandise counter (which appeared to be doing good business), plenty of devs on hand to answer questions, and a full panel to discuss the game’s progress and plans to a large audience. And Founder and Creative Director Steven Sharif was on hand the whole time to talk about his game with everyone who came by. As he told me, “That’s our job here today, to expose more people to [AoC’s] potential.” He wants players to know that it isn’t about promises without delivery

Between a demo and a couple of interviews, I had the opportunity to chat with Sharif about the game a few different times. We talked about classes, crowdfunding, and character customization. I also got to team up with a group and run through a short PvE adventure narrated by a dev, testing out skills and exploring a few features. Then I delved into a PvP match. And yes, we also discussed the red hat controversy. 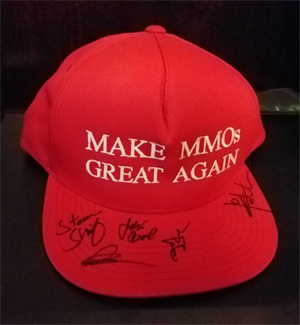 About that red hat

Let’s go ahead and get this discussion out of the way right up front. The infamous red cap with the slogan “Make MMOs Great Again” definitely caused a stir, especially on Twitter. I can completely understand the concern of using such a polarizing statement to represent a game. Is it a show of support, or is it humor, or is it something else? In light of how problematic some can find the slogan, I asked Sharif to explain the reasoning behind the use of it. Arguing that memes are a pretty popular part of internet culture, he explained it was meant as a wearable meme.

“As a matter of satire,” he said, “we’re taking a divisive element in our culture and we’re using it for a genre that promotes community building.” Indeed, Sharif emphasized that it’s about bringing people together. “You need to understand the context: It’s intended to be satire; it’s intended to be a meme. And here at a gaming convention, memes are going to abound.”

How has the reception been at the convention? Sharif noted that he’s seen many double takes, but most folks have laughed once they saw the actual message on the hat. Will it work, though? Repurposing a particularly provocative slogan or a symbol seems risky. Time will tell how it ultimately affects Ashes of Creation.

I mentioned that we talked about classes, crowdfunding, and character customization. On classes, Sharif expressed that the super generic names on the base classes is on purpose. In fact, those aren’t really the classes of the game; those generic names are on the archetypes, and combining them can make 64 different classes. It is the combining of two archetypes that will make the player’s class. One archetype will be primary and the other secondary. The archetypes are so generic so the skills involved area easily identifiable. Speaking of skills, the fact that each class has a special skill that helps with the environment (the cleric can dissipate a poison cloud, my mage dispelled an illusion hiding a hidden pathway, etc.) is really neat. I can’t wait to see how that affects gameplay.

I’d also asked Sharif about the second crowdfunding initiative on the site: How successful was it? he explained that this was not meant to be a big push of crowdfunding, which is why it wasn’t really pushed or advertised. All it was was a way for those who had no means to participate in the actual Kickstarter. Sharif explained that there was a block of players from overseas who wanted to help but could not because of the payment restrictions on the Kickstarter platform. This, then, was just a way for those folks to be able to back the game as well. No, it didn’t reach the levels of Kickstarter, but it was never meant to.

Relating that some folks have been complaining about the character models, I asked Sharif if any work was still slated for them. He emphasized that what folks saw on the videos and at the demo was “a super first pass.”

“We haven’t even compiled our shaders yet, for skin, for clothes, for materials,” he told me. “[The demo] was more about getting a general idea about the environment, of the skills and how they work, and just letting people see the progress we are making. As we move forward, I have some extremely talented artists, super talented artists, and the time that we’re going to spend on that character creation suite and the character models themselves is going to be very extensive.” He then revealed that one of his goals is to release the character suite early so that players have the chance to play around with it and then save their characters that they may want to use to upload upon launch. This will help me immensely!

A taste of PvP

I’ll admit that didn’t find anything particularly remarkable about the PvP combat when I played a match. But in all fairness, this was only a tiny taste, and this particular setting isn’t necessarily anything that will be kept in game; it was constructed specifically for PAX.

The PvP was a small arena where we played 4v4; there were objectives to get as well as opponents to hit. Our team ended up winning not because we earning more kills but because our ranger was running around swiping all the objectives while the other team focused on killing us.

In discussing the PvP with devs, it was noted that the team was looking into making arenas where players could engage in 3v3, 5v5, and 7v7 matches. This is only a possibility now, though, not a promise. I’ll reserve any judgement on the fun factor of PvP until I can play a more finalized version – and play more than one match.

Massively Overpowered is on the ground in Seattle for PAX West 2017, bringing you expert MMO coverage on Ashes of Creation, Ship of Heroes, Dual Universe, and everything else on display at the latest Penny Arcade Expo!

That hat ruins all good vibes.

I wish I could give these guys all of Star Citizen’s crowd funding. This is pretty much the only mmo I’ve cared about in many years. I really REALLY want to see this game released with the features they’re talking about. From what I’ve heard/seen, this is the only game that falls under the mmorpg 3.0 umbrella at this time. The stagnant genre needs to move foward and this game could help it.

Why not? Both of them became very succesful and drag alot of attention and hope. Both aiming to make breakthrough in their own field. Both arent quite there yet.

What’s with all the unhinged Trump derangement syndrome…it was obviously a joke.

Any chance to virtue signal I guess…. :-/

That meme was around during Kickstarter. Then I think it was mentioned very jokingly in one of the Ashes community podcasts and people ran with it. I very much despise the original subject matter but find no issue with the meme.

The way it is written sounds like there will be 64 archetypes. The actual numbers are 8 archetypes (Tank, Fighter, Ranger, Rogue, Mage, Cleric, Summoner, Bard) and 64 classes.

Anyone who actually gets triggered or offended by a “Make X Great Again” joke probably needs to evaluate their priorities in life.

Heck it’s not even a little bit creative, Stellaris did the exact same thing with their “Make Space Great Again” red hats. No one seemed to get worked up over that one.

Well Ashes of Creation is taking the whole “every other MMO sucks these days, we’re going to be the one that brings people back to redefine what MMOs are really about” schtick which always draws the cynics out.

I find it funny that they chose this Trump’s slogan for their MMO. Since I believe they will do as much for MMOs as Trump does for America

It has to be a sad existence to have nothing else better to but hate on games just for the fact that you are a hater.

Looks like youre very angry and need a hug. Here, take my upvote.

Someone I work with in IT, who opposes Trump (and especially Pence) for a wide variety of reasons, created a “Make Availability Great Again” poster to encourage application uptime.

Just gotta have fun with things.

Can’t imagine why that red hat would be a big “problem”. I think it’s topical and timely. Good marketing.

Is there still a lifetime sub option for Creation? Looks interesting, but there’s no way I’m backing another sub-only game. Don’t mind over-contributing as a one-time, but like to know I’ve locked in my account. Near as I can tell, the only offerings on the site don’t include a lifetime sub

They had a real limited run of these on kickstarter from what i remember. The money for the sub doesnt bother me as much as what you’re saying: I want to be able to access my account whenever and however long I want. Maybe I just want to return to see the game for a few days instead of paying for a game for a month but I only want to spend a few hours in it that month. The sub model really limits that and isn’t optimal anymore. Games like ESO, GW2, BDO and others have proved that.

I’d buy a lifetime sup as well though. All about being able to access the account when I want. I’d spend that money in a b2p game in the cash shop over the course of a few years anyways. Those game have a better model though and I can play them whenever and however long per month I want sans sub fee.

Exactly. I bought the TSW lifetime sub, and even though it was never really my “main” MMO, I never regretted it for a second. Now, with SWL picking that up I’ve been back in game playing a bit again even if it’s still my “alt” MMO. Even the games like ESO I wish would have a lifetime option, just because the subscriber benefits are almost too rich to do without (hello, crafter’s bag. where can I buy you as a one-off?)

I have no clue if there is a similar option for non-KS backers now, because I only see the KS backer upgrades that I can still purchase higher tiers of if I want, but the lifetime option was included in the $500+ packages.

It looks like now you can only buy the PAX packages which don’t include much beyond some PAX extras and the ability to buy into 2nd alpha or 2nd closed beta phases.

Fortnite adds the Terminator T-800 and Sarah Connor as latest in...