While there were plenty of established games on hand at PAX West 2017, there were also a few new ones offering players a taste of the future. Survived By by Digital Extremes is one of those new games. Announced just two days before PAX began, it had stations set up allowing players to dive right into a dungeon and experience the 2-D pixel game. And that’s exactly what I did while talking to Producer Ryan Jackson about permadeath, classes, crafting, and the story.

Jackson told me that the game is actually set in a cross section of the world tree. The tree is sick, however, and can’t seem to heal itself anymore, and it’s being invaded. He said that the mystery of what is happening is what DE wants players to unravel as they play in the first act of the game. Closed alpha will be starting soon, and folks can sign up for it on the official site. I actually can’t wait to get back in!

Until death do you play

To make sure I got the full effect during the hands-on, Jackson joked, “The way I usually approach this is I’ll walk your character through, then distract you while you’re playing and get you killed.” And die I did, but not until the end; I was soloing a group dungeon and ran into mobs that were beefed up right before the demo. I was incinerated in a barrage of fireballs from all directions!

Although I am nervous about permadeath, I was relieved to learn that there are features in place that can prevent players from actually losing everything and starting over from scratch. One is the Ancestral Legacies. Jackson explained:

“When you are playing the game as a character, you’ll have challenges that you complete. The challenges are like achievements except for a single character. Once you die, the game will go back through the challenges that you completed — some will reward you Ancestral Legacy cards and some will reward you valor points. The valor point are used to increase the level of these cards. You can level the cards once you die, and he next time you make a new character, you can apply these cards to that character. That character starts off more powerful.”

You can’t use all of the cards, but you can choose which ones you want to apply. Certain cards can be better for certain classes depending on how you play. Jackson also noted that live characters can be respecced with these legacies. He anticipated that some players would have a main character they want to keep alive and a second character that goes out completing challenges; those cards earned upon death of the second character will then be used to make the first character stronger.

Another way that players can keep their stuff is by placing it in the vault in the central hub. All items in this vault are saved for your next characters to grab and use. Yes, you lose anything you carried on your character, but stored items are safe. But wait — even that can be mitigated. “You can buy insurance for items. So if you are going into a dangerous location and you think you might not make it, you can make sure your sword does,” Jackson explained. Your insured item will be in your mailbox for the next character you make to claim.

An interesting fact: Whenever someone on the server dies, there is a final send off earthquake that everyone experiences.

As for the gameplay in before my demise, I found it it pretty fun. Jackson remarked that Survived By doesn’t follow the standard MMO trinity of tank, healer, and DPS. “All of these characters are self-sufficient,” he explained. “What makes them different is their secondary abilities.” While I almost never play rangers in any game, I selected the Harbinger here on his recommendation (I was informed two of the classes seemed to be under-powered for a solo run) and got to blasting everything to bits. I quite enjoyed this class: I loved the special skill that let me mark multiple mobs and then fire one shot to obliterate them all. Of the other available classes for the demo, the Alchemist fired grenades, the Infiltrator drops into stealth and then shoot a fan of knives when he emerges, the Sentinel puts down a protective force field that also increases health regeneration, the Geomancer puts up turrets, and the Druid turns into a high-damaging bear. 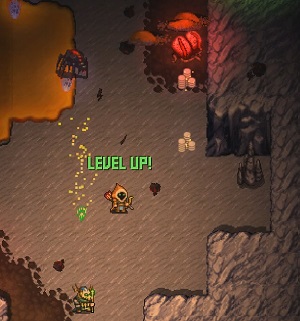 Jackson explained that the game uses a system for easy grouping — just getting near another player will put him in a group with you. That pretty much means that anything that gets killed nearby will give XP and loot to all, so there is no KSing. (There’s also no PvP at all!) Entering a dungeon is the same: Anyone who goes into the portal for 90 seconds after someone opens will be in the same dungeon.

“It’s very easy to gather and cooperate and get better results,” he said. Do note that the dungeons are procedurally generated, so they will never be the same. Additionally, Jackson said that the size of the dungeon is variable, so you won’t even know how many rooms are there to hunt the boss in.

A very unusual aspect to the combat for me was the fact that your mana naturally decreases over time even when you’re not fighting, so you must refill it by killing creatures and getting potions. This keeps the combat moving ahead and action pretty constant. This is designed, Jackson explained, “to keep pushing you forward into that bullet hell.”

Other dropped loot is crafting materials. As for Survived By’s crafting system, Jackson told me it has two goals in the game. One is as a way to always be progressing toward better items, and the second is to foster player interaction with trading, buying, and selling.

“We don’t want to follow the traditional MMO where there’s only one way to get something,” he told me. “So while the boss drops some good loot, pretty much everything it drops you can also craft. So every time you make a run, as long as you survive and get your materials back to the town you are making forward progress on getting a better item.” You also don’t have to make it for that character, but can farm on one character and make the equipment for another. Player interaction is increased with an auction house in town and direct trading.

Besides crafting and trading, the town also has daily quests and vendors as in other MMOs. This is also where the microtransactions will take place, but Jackson assured me, “Our overall goal there is anything you can buy you can also earn. We want to try to focus on things that provide convenience and time.”