One more bridge. That’s what she kept telling me, even though I cautioned her that sooner or later our luck would run out. She would pause, then shake her head and urge us on. One more bridge.

That day, when we crossed a seemingly innocuous wooden bridge over RIFT’s gorgeous Scatherron Forest, our luck broke — as did six boards, sending us plummeting down into a gorge. As I fell, I wondered why I was taking orders from my talking mount anyway. Perhaps she knew that fall damage was a thing of the past and I could be pressured into recklessness.

After I pick myself back up and find another route onward, we’ll look at the rest of this week’s player-submitted screenshots and stories! 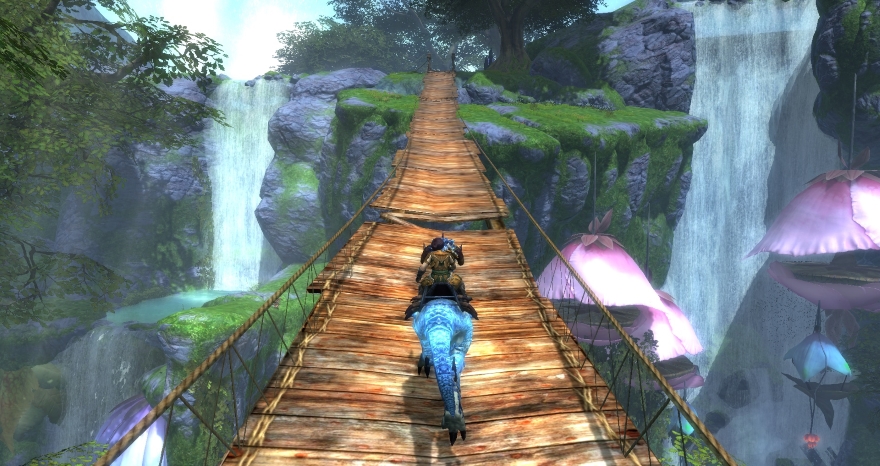 Last week’s screenshot challenge to pick out references to real world locations resonated with some of our readers, including Miol, who posted a slew of Guild Wars 2 shots.

“You can choose for yourself if it’s a reference to the Great Wall of China, Great Wall of Gorgan, Hadrian’s Wall, or any other wall that eventually failed their builders, given enough time (or to possible future walls, if someone doesn’t want to learn from history and thereby condemned to repeat it)!” 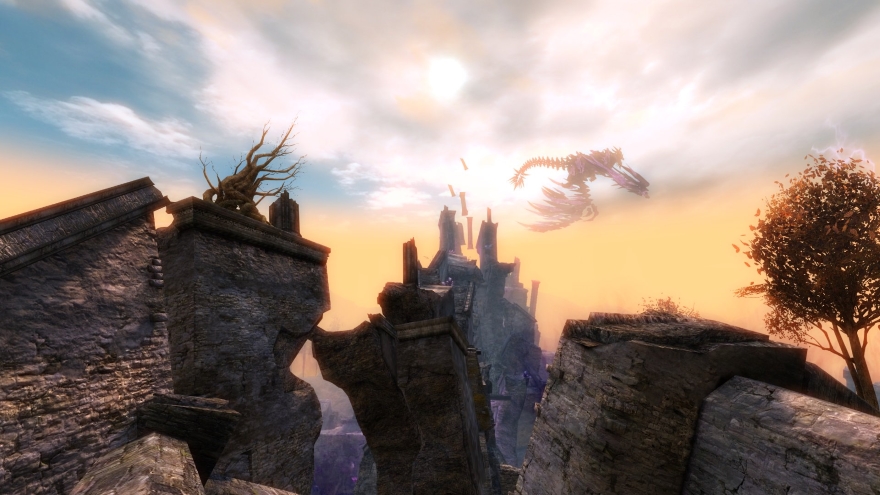 It looks like the Irish have arrived in EverQuest II! “This is from a limited duration instance in EverQuest II for some sort of event, the St. Patrick’s Day thing (Brewday? It’s been too long!),” Camelotcrusade said. “There was another stage with dancing male Fae but sadly they didn’t get onto the piano with me!” 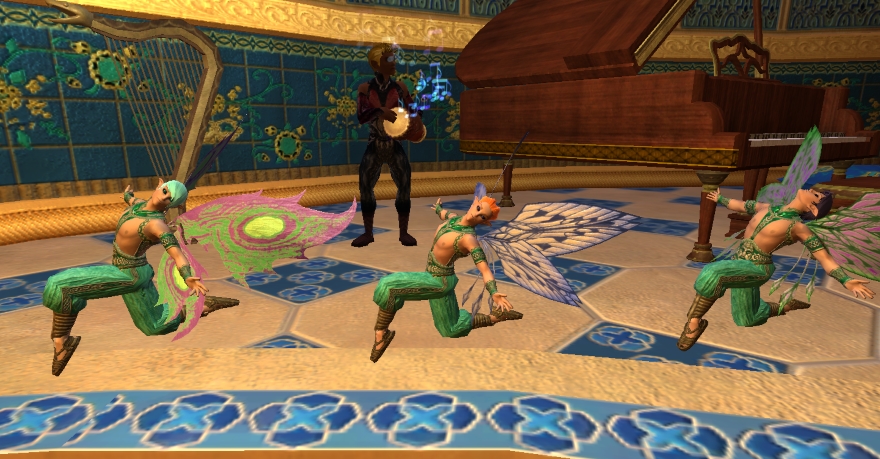 Rees Racer went for an easy solution to the challenge with this Star Trek Online pic: “Well it doesn’t get much less ambiguous than this image of my Vulcan captain taking in the views at Star Fleet Academy in San Francisco. It’s comforting to know that the almost 500-year-old Golden Gate Bridge remains the iconic image in a world city long considered a bastion of multi-cultural influences.” 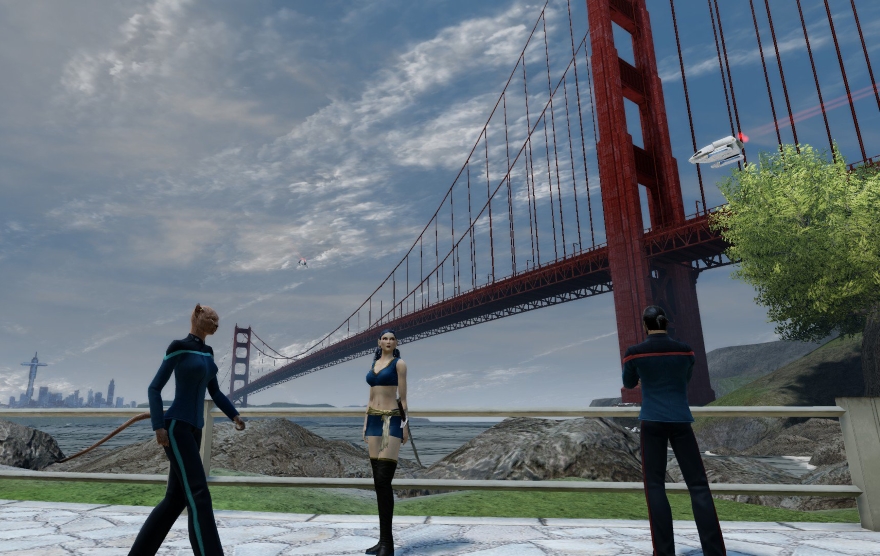 Ever wonder what the crafting anvil sees and feels in an MMORPG? Here you go, courtesy of Melissa!

“Dropping the hammer in LOTRO,” she posted. “My crafting is nearly caught up to my level. Starting to make some pretty nice light and medium armor.” 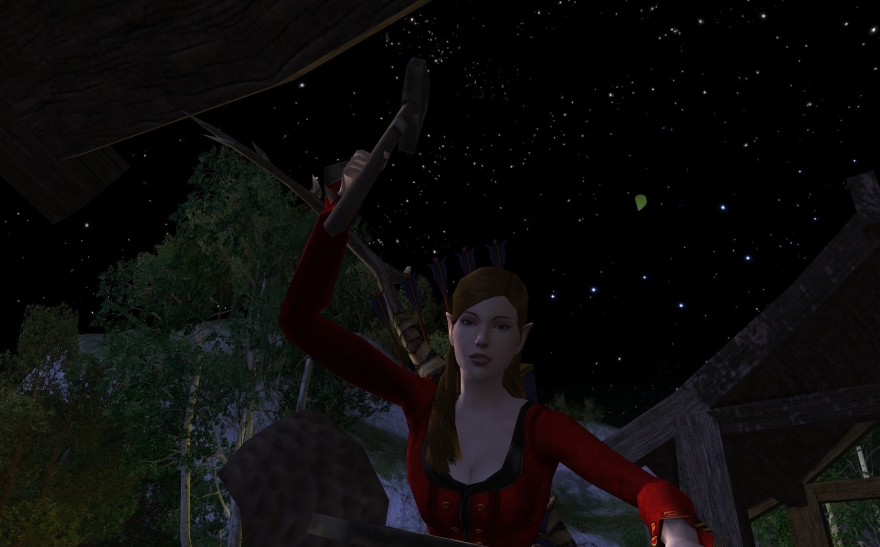 For this week’s challenge, I’m curious if you’ve ever taken a picture of your character leveling up. Plenty of MMOs have additional light and sound effects when this happens, so let’s see yours!

Pepe twitters and observes curiously. Being an Interdimensional Traveler, he has seen and heard it all. And he doesn’t get what all this Argus fuss is about.

I got a few oldie level shots full of UI though. One old Vanguard and a few AC1 pics.

Hitting the original max of lvl 126 in AC used to set off a big set of fireworks and became a guild event for those that reached it.

Somehow the wrong VG one got in there.

Challenge accepted. BnS sure as hell lets you know you have leveled.

Adventure…heh! Excitement…heh! A jedi craves not these things. Leveling up…ain’t bad, two out of three is.

Well, I’m back. Took a bit of break from gaming to focus on one of my other hobbies motorcycles. And… yeah, they are mutually exclusive. Can’t really do both concurrently. Lol. But, I never stray to far from MMO worlds.

So… Yup. I’m back in BnS just in time for the Gunslinger drop and I couldn’t be happier. So much fun. So prepare yourself for another round of BnS Cap-spam. Here is a little taste.

My new slinger, Haliee, looks more like a “loli” much to the chagrin of some. However, she is anything but that as anyone who has had an unfortunate encounter with her can attest. The girl just kick’s ass and chews bubble gum.

I loved posting in this column, but I haven’t been MMOing in a while (roll20 is my MMO now!) so I tapered off. I still have some old shots, though, so I play when I can.

There’s no Lyn slingers though! >.<

…and glad you're back! Though you had an accident or something. :(

All good. :) The thing is after a day riding around on the motorcycle, all I want to do is sleep when I get home. Lol. I must be getting old. But, its time to get back to my old main stay. More gaming and less riding!

Somehow your other interest reminds me of this:

“…a picture of your character leveling up.”

At least 2 of the more prominent Korean MMO’s feature a remarkably similar animation. I suppose it’s not terribly surprising that Blade & Soul and TERA would share a few ideas, even if not intentionally. Gun classes are not necessarily my favourite, but quite by coincidence here are the screens of my Gunslinger and Gunner…from the former game on top, and the latter underneath. Leveling gives you wings!

Heh, I’m leveling a my BnS slinger but always miss the screen cap. A little late on the draw you might say.

Love the juxtaposition there. Nice!

Thx, Justin! While alting, I came across this idyllic little corner with waterfalls in Brisban Wildlands, but not without finding a littered up den of Skritt right next to it! Seeing a bunch of scrap water wheels lying around, you can easily put two and two together what those always hustling Skritt already have in mind!

Thanks for the feature! I don’t have a leveling shot to share (that would involve staring at point allocation screens) so I took a look in my randos.

I call this one “Waiting on Group Members.”

Love the look on her face. “I joined the Dark Side because I could no longer stand the waiting around!” :-)

I have pink fluffy wings!

And a built-in back-up pair, too, like a spare tire. That’s good planning!

No pink-winged Icarus, he! :-D

I don’t need wings though, I just use my pigtails. /flap, flap, flap <3

Some pics from what I’ve been playing the most lately — namely, Destiny 2 and Agents of Mayhem.

Unfortunately, a lot of the best beauty pics I could post for Destiny 2 would also constitute plot spoilers, so instead, all I can offer is pics of my character’s current gear loadout. I’ll see if I can get more scenic (but safe) pics for next week.

Also, here are some Agents of Mayhem pics featuring some of my favorite characters thus far.

Apologies for the UI, but I can’t seem to find a way to remove the UI on screenshots in the PS4 version of the game.

Fortune is probably my favorite; she’s a “sky pirate” from South America (the Saint’s Row universe contiinuity got re-booted at the end of Saints Row 4 and Gat Out Of Hell, remember?), and she’s just fun to play — great voice work too.

If Fortune ever got her own solo game about “sky pirate” adventures, I’d buy it.

Daisy is a tough-talking roller derby queen who carries a minigun into battle. What’s not to love here? :-)

Hollwood is a pleasant but dumb Hollywood actor. He’s such a himbo, and some of his lines make me laugh out loud. Dumb as a rock, but he means well. :-)

Rama is an East Indian archer character — I like to play her, but she typifies some of the design problems in Agents of Mayhem.

Combat in Agents of Mayhem tends to be “swarmy”, plus it escalates fairly quickly, especially in the open world, with increasingly tough enemies beaming in to join the fight.

Problem is, Rama can be all glass and no cannon when things get crazy. Either her arrows need to one-shot more types of badguy, or else she needs better defensive abilities added to her character design. She simply can’t withstand or avoid sustained enemy attack, so she incaps way too fast much of the time.

I still play her, but I have to “nursemaid” her, and swap out to other, tougher characters on the three-character squad whenever things get too hot.

It’s like the folks at Volition didn’t have the time to test all their character concepts fully; not all agents of Mayhem are created equal.

Lastly, I randomly found this scientist dancing away in the back of a truck while chasing down a mission entrance. It made me smile.

Enjoy, folks, and take care of yourselves, please!

One in the red cap is my favorite. :)

That’s Fortune, my favorite as well, as above. She’s got some Uta DNA in her, I expect.

I wish I could give you a better look at her, but the camera-distance in Agents Of Mayhem doesn’t get in very close. I’ll see what I can improvise for next week. Stay tuned. :-)

Here ya go, Uta. I managed to wrangle the in-game camera into giving up some closer shots of the character Fortune, in Agents of Mayhem.

Yeah, that looks really cool! And thank you! :)

The Division 2 outlines overhauls of Recalibration and Skill Power systems