END_OF_DOCUMENT_TOKEN_TO_BE_REPLACED
It’s hard to know where to start with these impressions because the upcoming DLC for Elder Scrolls Online is significantly more complex, more extensive, and more fun than I originally anticipated. Clockwork City has surprised me on multiple levels. Those who were fans of the Tribunal expansion for Elder Scrolls III will find nostalgia everywhere, and those who are new to this part of the lore will find a world that is similar yet very different from the rest of ESO.

Over the last couple of days, I have been spending my time on the public test server for Elder Scrolls Online where ZeniMax Online Studios has dropped its latest DLC: Clockwork City. This isn’t the first time we’ve been to the Clockwork City, but this DLC will be the first time that we are allowed to freely explore this creation of the god Sotha Sil.

There is no way that I am going to be able to sum up the hours of gameplay that Clockwork City has to offer in just a few hundred words, but let me hit on a few things that were the most important to me: aesthetics, storytelling, exploration, and gameplay.

In a Reddit AMA, TES III writer Michael Kirkbride called the world of Morrowind sci-fantasy. When I mentioned that to ESO producer Matt Firor, he disagreed. He felt it was more high-fantasy, and almost all of Tamriel reflects this aesthetic. Castles, villages, and expansive countrysides show us that this is a land of dragons and magic. However, Clockwork City is literally a different world — a world within a world. From the way the buildings are constructed to the steam-powered robots sweeping the buildings, it’s clear that we’re not in Tamriel anymore.

I enjoy it. The whole world of Clockwork City seems to be lifted straight out of a steampunk comic. There are robots, as I mentioned, and cyborgs, but it’s all powered by the magic of a god, who is part machine himself. I would love to live there. In fact, I could live there because there is a player house in Clockwork City.

The size of the landscape was also impressive. I honestly was not expecting more than maybe a building or two. Maybe something about the size of Clockwork City in TES III: Tribunal. But it’s bigger. It’s about the size of a regular zone in the other parts of Tamriel, but that’s a bit hard to judge because there many of the buildings in Clockwork City actually have multiple levels, which impressed me even more.

In search of the Clockwork God

Sotha Sil always seemed aloof and more distant than the other gods of the Tribunal, but if his actions in this DLC are the norm (and we are constantly told they are not), then Sotha Sil is actually pretty hands-on when it comes to the work of his world that he created.

The set-up for our entrance into Clockwork City is a little weak, as most segues in ESO are. We are a renowned adventurer and someone needs our help. Well, in this case, it’s a mage and right-hand to Sotha Sil himself, Divayth Fyr. If you run his quest in Morrowind, of course, he will know you from that. However, if you haven’t run that quest, then he will say something simple about how he heard of your work with the Thieves Guild or something like that.

From there, you will be taken to Seht’s Vault, where a miniature city sits on a pedestal. When you activate the globe, you will be shrunk and dropped into the Clockwork City, but according to Fyr, you land at a place you should not have landed in. Then almost immediately Fyr’s shadow is stolen from him and you have to chase it down. That is where the mystery begins.

I do love the lore of Sotha Sil and Clockwork City, but I can’t help but feel several degrees of separation between my character and the story that’s playing out in front of him. The common problem in ESO is that your character doesn’t seem to actually participate in the scene; rather, he adds frivolous commentary on someone else’s story. Those stories are interesting. I especially enjoyed the political dynamics of Clockwork City between those who see Sotha Sil as a true god, those who see him as scientist and teacher, and those who see him as a man who happens to have great power. But I felt like my character was doing all the work without actually getting to participate in the story. 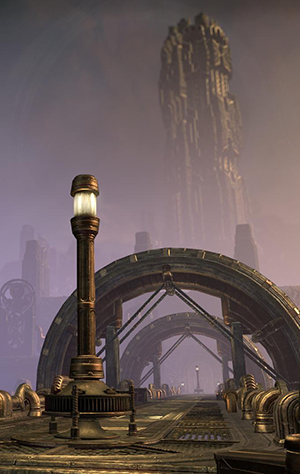 There is a lot to unpack with Clockwork City, but besides the surprisingly deep storyline, there are a handful of interesting sidequests and places to explore. It’s easy to get literally get lost. As I mentioned before, there isn’t a vast expanse of land in Clockwork City, but there are multiple levels representing the inner workings of this manufactured world.

Honestly, I was expecting only one questline confined to one area in Clockwork City, but I was surprised to find out that there are a handful of other buildings with their own connections to Sotha Sil. My favorite was the Mnemonic Planisphere.

In one of the ESO loading screens, Sotha Sil’s sister god Almalexia is quoted as saying, “Ordinary people keep a journal. Sotha Sil decided to store his memories as star-data in an artificial astronomical matrix.” That astronomical matrix is the Mnemonic Planisphere, overseen by the Astronomer. Inside, you will find out how a god keeps a record of his centuries-worth of memories. There are also little easter eggs there that reflect back on some TES history that we already know about, but you have to be looking for it – or rather, listening.

How the clock works

Of course, mechanically, combat works pretty much the same way that it always has, and given the level-sync, no fight is all that difficult, even with a low-level character. However, there were some fun mechanical moments like when you get to play as a wind-up mouse called a seevaton. But if you were looking for some mechanically new and interesting addition to the base game, you will not find that in this update. Still, this might be a good place to make that Warden character you haven’t mustered the courage to create yet.

Overall, I like Clockwork City. It isn’t as interesting to me as the Thieves Guild DLC or as complex as the Dark Brotherhood storyline, but I enjoyed it more than the primary story for the game. Isn’t that the way that Elder Scrolls games are supposed to work? The side stories are more interesting than the main questline.

What are your thoughts? Have you been able to jump onto the PTS to play it yourself, or are you going to wait for it to release to the live servers in just a few weeks? Does the thought of finding more out about the mysterious god Sotha Sil intrigue you? Let me know what you think in the comments below.

Sotha Sil, The clockwork city, and all the magitech is probably my favorite part of TES but I can’t get into ESO. It’s such a boring game. I wish It wasn’t a MMO and specifically not a linear themepark MMO.

The producer of ESO disagreeing with what TES has always been is pretty sad.

If I get more into ESO, this may be one of the first purchased DLC :).

Best Western MMO on the market, or so I think.

It has the 3-faction pvp everyone always asked for, it has the Battlegrounds people crave, it has the endgame raids/dungeons the vast majority repeat without end, it has an open class system, it has vampires and werewolves, nice housing, the gear grind is to become pretty much absolete, …
It’s only feature lacking? Wardrobe/transmogrification/cosmetic system. And that’s coming too!

Nope, ticks all my boxes but one and fails only where other MMOs fail also.

Awesome game, I love it. Exactly what I needed to be able to move on from that pale shadow of what once used to be LotRO, which I played for 10+ years.

It is a shame it hasn’t got Lotros community . ESO is a great game but it also has a very antisocial community which is what puts me off most about it .

Only one comment? hmmmm interesting…dooom eso is dying! :)
I am a non subscriber now so was hoping to get some opinions before deciding to buy…

This one is a complete no-brainer for me, being a huge steampunk fan. Bring it on!