Yesterday, ArtCraft posted a live Crowfall Q&A video showing off what the devs are calling “action harvesting” – and it caused a surprising amount of uproar in our comments. Essentially, the game will simply put players into a harvesting mode with a special skill bar. Instead of clicking, grabbing, and darting off, you’ll be finger-dancing skills on the node.

Incidentally, it’ll also leave you exposed to enemy attack, but the chief complaint was actually that it’ll be a boring timewaster, the sort of things other MMOs have tried in crafting and rejected because they’re fun a few times and then, a chore.

Today, the studio’s gone into more depth on the system, explaining that the changes “mesh” with the game’s action combat and were actually inspired by the game’s ongoing power tray redesign as the devs played around with trying to build harvesting that wasn’t just a click to get stuff.

“Not only did [the survival tray version] of the prototype work, it was waaay more fun to run around and harvest,” Design Lead Thomas “Blixtev” Blair explains. “The animators enhanced it even more with some flourish animations to break up the visual pacing. Enabling the fly text that was shut-off by default made it feel even better since fly-text not only gives valuable feedback to the player as to how much damage their current tool is doing vs the current resource node, but it also creates a nice sense of progression as you get better at Harvesting (and it creates some visual eye candy!)”

It’s not done yet, he notes, and the team is still retesting player behavior with the new system, but in the interim, it’s “a much stronger foundation to work from.” 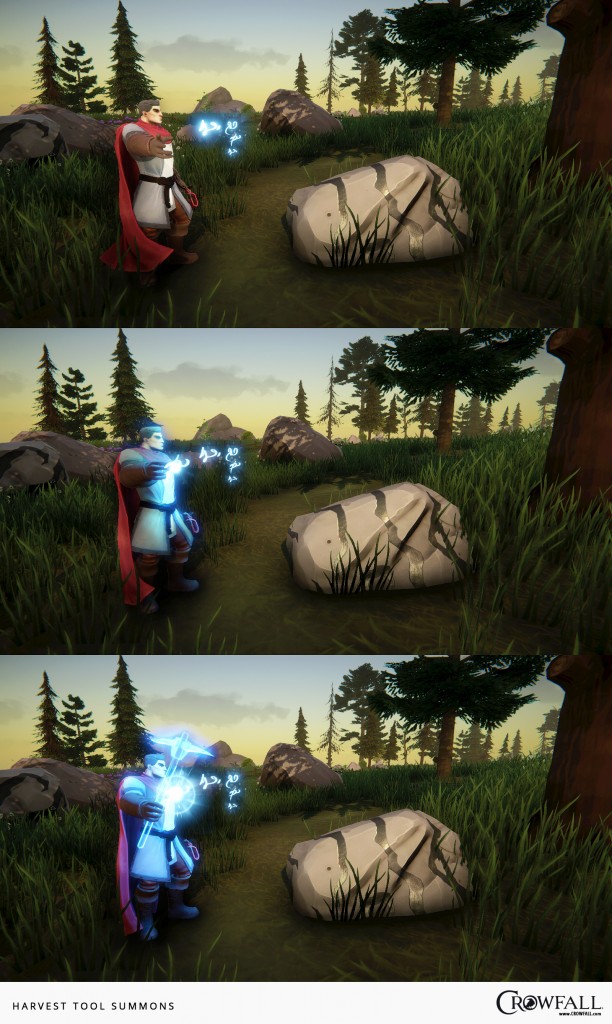 I said it before and I’ll say it again: This is something that’ll be novel and neat the first few days but on day 60 when you’re grinding node #9359 it’s going to just be tedious and boring at that point.

I’m not sure who or what this system is designed for as the kind of people who might appreciate this tend to be heavily pve focused and likely won’t be playing a gankbox game. The rest of us are just annoyed you’re making me take longer/more effort with the pve garbage I don’t want to have to do to fuel my pvp time.

Learn your audience ArtCraft. It’s nickle and dime shit like this that come back to weigh very heavily when we decide to keep playing after 30-60 days.

I dislike grinding mobs in games and never do it, takes too long for too little reward (random items you can get that are useful beyond the predictable constant). Harvesting is getting predictable items. I don’t want this to become an extended process of whack a mole as combat is, it is already boring.
Make it an actual game or make it as painless and quick as possible. Nobody wants to grind in their spare time without “loot”. Wood and stone is not loot. Making a backflip while grinding is not helping either.
/exasperation end

This will get old and annoying FAST.

The node did not know that it was already dead.

I watched the YouTube video of this livestream and it does look a lot more fun. The animations for one thing look really cool but they also explained the entire system a bit more. It’s sounding more like people will essentially be developing a gathering “class” complete with stats and tools of varying quality.

Also apparently they have “group harvesting” nodes, basically nodes that are so strong you need more than one person to harvest them. Sounds interesting.

I’m glad they are trying something different with harvesting, though I’m not sure if this will be what we need. I’ve played Crowfall and the harvesting was unbearable, it made me not want to play. I had thought to myself that they should just make resource nodes attackable and you just use your regular skills against them. Maybe cause it to spawn some enemies on you while you’re doing it too.

Harvesting has been needing help and attention in MMOs for a long time. I’m not sure players realize what a small percentage of people actually engage in harvesting.

Not sure I like the ‘attack the node’ ideas, but I agree we could use an update to gathering/crafting mechanics in MMOs.

Kickstarter has the luxury of being in continual discovery mode. Waste time spitballing ideas in a public setting, take a few weeks for the ideas to come back, repeat.

The result is loose, sloppy, unfocused development. I wish any of these KS projects would do something tight and focused, knowing what they want to do and doing it well. Poor focus seems to be part and parcel of the KS model.

And all games that do that, fail. They rely upon the opinions of masses that keep asking for the same things over and over again, only to ignore the game when they get it because it was the same thing over again. Its a lazy development process and it ruined Albion Online.

The problem im seeing with Artcraft is one that I would have hoped newer studios would have strove to avoid. That being… the mentality that “They know best”. IE: They are telling us what is fun.

I dunno, indie games seem like the perfect opportunity to try new things. If you try to please everyone you end up with the same generic crap that we have had for the past 10 years.

You can still try new things, and still be innovative, without having the mindset of “We know best”.

A good designer will create a new, innovative game, that merges elements that players enjoy because they were still able to remain open minded within the restraints of their new, original concept.

Aye, they sound like the old Blizzard “Our way, or the highway” line is in use. Which went to the point of Blizzard actually saying “Nope, we define words, not the dictionary” in response to players on the forums. It… does not inspire confidence in me.

That said, if a game developer communicates and talks to the players, actually thinking a little about the concerns, and provides well thought out responses? Different story. Sadly, it usually takes the blunt force trauma of millions of people hating something when it is live in game.

This is a flagrant misunderstanding of what players think is wrong with gathering in MMOs. Here’s a hint: we weren’t looking to make it more time consuming, or for it to include failure states, or, really, to engage such a system /at all/ in open PvP zones.

I love the implication in the article that the community explained all of this, and the studio came back with, “No, no, you don’t understand, /this is fun/.” Thanks, ArtCraft. :)

This was a pain in Ryzom, but at least then they had the excuse that if you mined too hard the planet would explode your ass. Looks here it’s an excuse to get ganked.

That’s exactly what it is, they want more opportunities for gankers.