Over on the PC side, PlayerUnknown’s Battlegrounds dislodged World of Warcraft by one place since last month, while DOTA 2 fell down to 10 and ROBLOX fell out of the listing as CS:GO returned. On console, GTAV/GTAO is still on top, though Overwatch got bumped one place thanks to the entry of Yet Another Madden game. And the mobile listing shuffled slightly, with Pokemon Go inching upward once again.

“PlayerUnknown’s Battlegrounds continues to dominate PC game sales, despite still being in Steam Early Access,” says SuperData. “PUBG is the number 1 premium PC game for the 3rd month in a row and has overtaken World of Warcraft on the total PC games list for the first time.” Indeed, the company says PUBG sales accelerated last month, “bringing total life-to-date sales close to 9 million units through August.”

Don’t feel too badly for Blizzard, however; as SuperData notes, Overwatch’s monthly active users on PC hit an all-time high in August, and Hearthstone’s revenue likewise peaked during that same period, both on the heels of major updates.

“In the U.S., digital games revenue grew year-over-year. This growth was underpinned by a rise in free-to-play digital revenue. This more than offsets the decline in pay-to-play, which was down on a difficult comparison against World of Warcraft: Legion last year.” 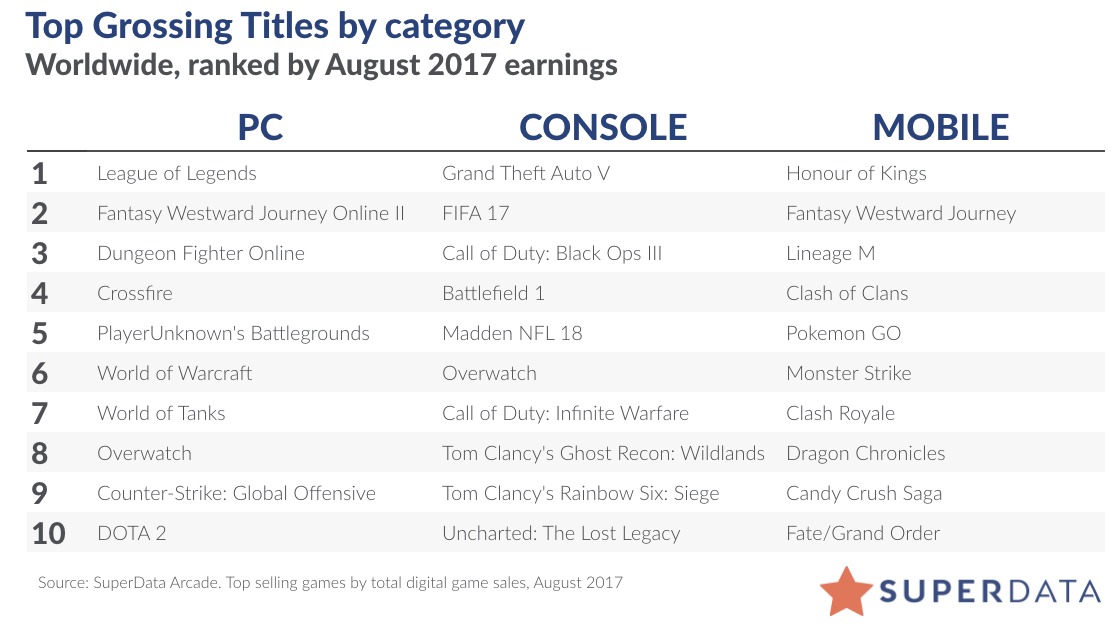 Source: SuperData. With thanks to Sally!
newest oldest most liked

Oh, how I hate SuperData

I don’t get the PUBG phenomenon. I’m sure the game mode itself can be fun, but the shooting mechanics and environments don’t look good at all on any of the videos I’ve watched.

Visceral combat and really easy to be a streamer viewer/caster.

Geez, places 2-4 are dominated by the chinese market, place 1 most likely has a big contribution from there. Who cares about PUBG, really? Look at those numbers.

#5 PUBG also has a very big Chinese presence. as does #6 WoW.

Did we just call a new WoW killer?

I do wish that gaming sites would agree to settle on one commonly used abbreviation for the name of Player Unknown’s Battlegrounds.

The columnists at Rock Paper Shotgun use “Plunkbat,” which is nice. Like “WoW,” it’s easy to pronounce out loud.

“plunkbat” also lends itself nicely to yelling “plunkthat!” and “oh yeah, well plunkthis!” while getting mindlessly slaughtered on a godforsaken ex-soviet death island late at night.

not that I would ever do such a thing

It is fairly obvious that the “PUBG” abbreviation is already settled on.

Now is when I admit to thinking the title was Player Battlegrounds Unknown, a.k.a. PBUG, which can be pronounced “Pee-bug.” There’s nothing awkward about saying that, is there?

I have about 200 hours in the game and I just realized i was saying it like PUGB…. (PUG-BEE)

They’ve given up: it’s PUBG (not trying to cross promo mop)

The PUBG Map: Where To Loot, How To Win

*Shakes fist at the heavens*

I feel like this genre is leaving me behind.

How likely is it that the increase in F2P revenue is directly related to more and more games selling lockboxes? I can increase my revenue with a few B&Es, doesn’t make it the right thing to do. If you’re going to do lockboxes, at least go the Path of Exile route in terms of transparency and value.

Given that subscription revenue also declined, part of it, at least, seems to be from players migrating from subscription to F2P titles.

I suppose that’s possible, but there are very few subscription titles left from which players can migrate.

Life Beyond studio Darewise rakes in over $3 million in new...