END_OF_DOCUMENT_TOKEN_TO_BE_REPLACED
Remember a couple of weeks ago when Valve said it was continuing to seek ways to crack down on review bombing, the practice of sending a zerg of people to wreck a game’s review standing on Steam usually for reasons unrelated to the actual quality of the game? This right here is why. This is why we can’t have nice things.

The latest review bombing drama involves one of the most popular games in the world right now, the irritatingly named PlayerUnknown’s Battlegrounds. Apparently, Chinese players are really pissed off about an ad for a VPN service that’s begun appearing on the lobby screen of the game’s Chinese version. Chinese players are already frustrated with the bouts of lag they suffer, to the point that they feel forced to play on international servers just to participate, so an ad from a VPN company right inside the client – claiming it’s from “the only official accelerator of the game” – is a bit like adding insult to injury. That’s on top of the fact that there are freakin’ ads in a buy-to-play early access game.

As VG247 points out, Steam’s review metrics for the game show a fairly well reviewed title – right up until this weekend when it tanked with over 15000 negative reviews. 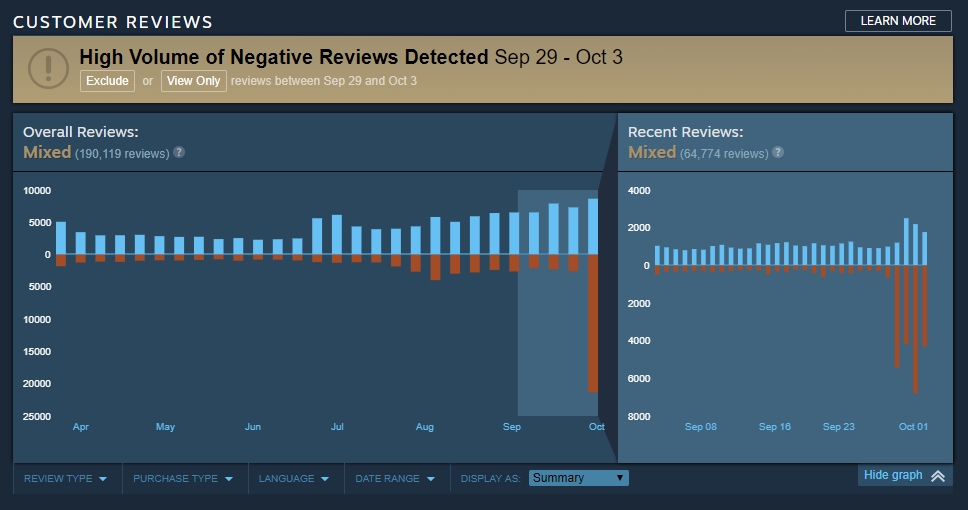 Also check for Best Radar Detector In The Market

Y’all need to read the source. This “VPN” service is an “accelerator” service and doesn’t related to the general VPN usage, now illegal, that bypasses the GFW in China. It’s bullshit that FPS players with high pings are given advantage, and it’s even more bullshit to asking players to pay for accelerator services.

PUBG is an awful name. The name is PLUNKBAT!

I didn’t know VPN were legal in China?

PS: No, they are illegal, I thought so. So people buy a software that than tries to get banned in the country while making more money – and risks getting people into prison? Unjustified? Not really …

Whatever. The game is making money hand over fist and the review bomb isn’t going to change that. It will also quickly fade into the background as the game continues to garner new reviews; Valve’s review algorithm shows both an “all time” and “recent” review score.

I’ll admit to being a bit perplexed by the whole thing. I pay for a movie ticket and I get ads and previews before the movie. I buy a video game and I get ads for microtransaction services; sometimes even ads for popular products are baked into the game on scenery and billboards. Maybe there was some violation of a taboo in Chinese culture, but I’m unfamiliar with it.

I keep reading about how toxic the gaming community can be — one misstep and they unleash the ravening hordes — every time I read something like this.

“The fanbase is berserk.”
— direct quote from a City of Heroes content developer, a friend of mine, as we sat down to play D&D 3.0.

Well, it was for one advertising an illegal product in China where people who go against the state are rather harshly treated…

I noticed this when I was checking how it was stacking up aginst Fortnight. If I see this kind of metric reults can’t be taken seriously. Also a lot of posts with the same wierd complaints about being banned for killing streammers and also a bunch declaring “I am not chineese”

I feel like this is a fairly legit reason to poorly review something.