Last week, we broke the news that Spacetime Studios was working on a new mobile MMO, and as of today’s announcement, it’s been confirmed. That mobile game is called Pocket Legends Adventures, an “homage” to what Spacetime says was the “world’s first 3D mobile MMO” — that’d be the ahead-of-its-time Pocket Legends, of course, which the studio followed up with Star Legends, Dark Legends, and Arcane Legends.

The new game’s not being called an MMO, as Spacetime seems to prefer multiplayer RPG, but it seems as much an MMO as the old game. It’s being described as “an epic, action-packed multiplayer role-playing game for iOS and Android platforms” that boasts “innovative real-time combat, unique skill-based advancement, endless character customization, and extensive single player campaigns” that take “the mobile role-playing experience to a whole new level.” The company’s also noting it “significantly advanced [its] proprietary game engine animation and rendering technologies” to improve the graphics.

“Social gameplay will be front-and-center in Pocket Legends Adventures, with Friends, Chat, and a wide range of exotic and humorous vanity items to apply to the avatars. Gamers can expect the same pick-up-and-play mayhem as the original series with several new multiplayer modes to enjoy with their friends. […] Game mechanics are casual but allow for deep character specialization, so players will be able to experiment with a wide variety of builds to fit their play style without sacrificing their favorite looks. Simple on the surface, with infinite character builds, Pocket Legends Adventures is a full-featured RPG distilled to fit today’s on-the-go lifestyle.”

Signups for closed beta testing round of the new title are live on the official site; the test is expected to begin on October 9th on both iOS and Android. We previously reported the game looked to be F2P with in-app purchases, servers, and character progression, and it won’t be crossplatform – it’s mobile only. Check out the new pics below! 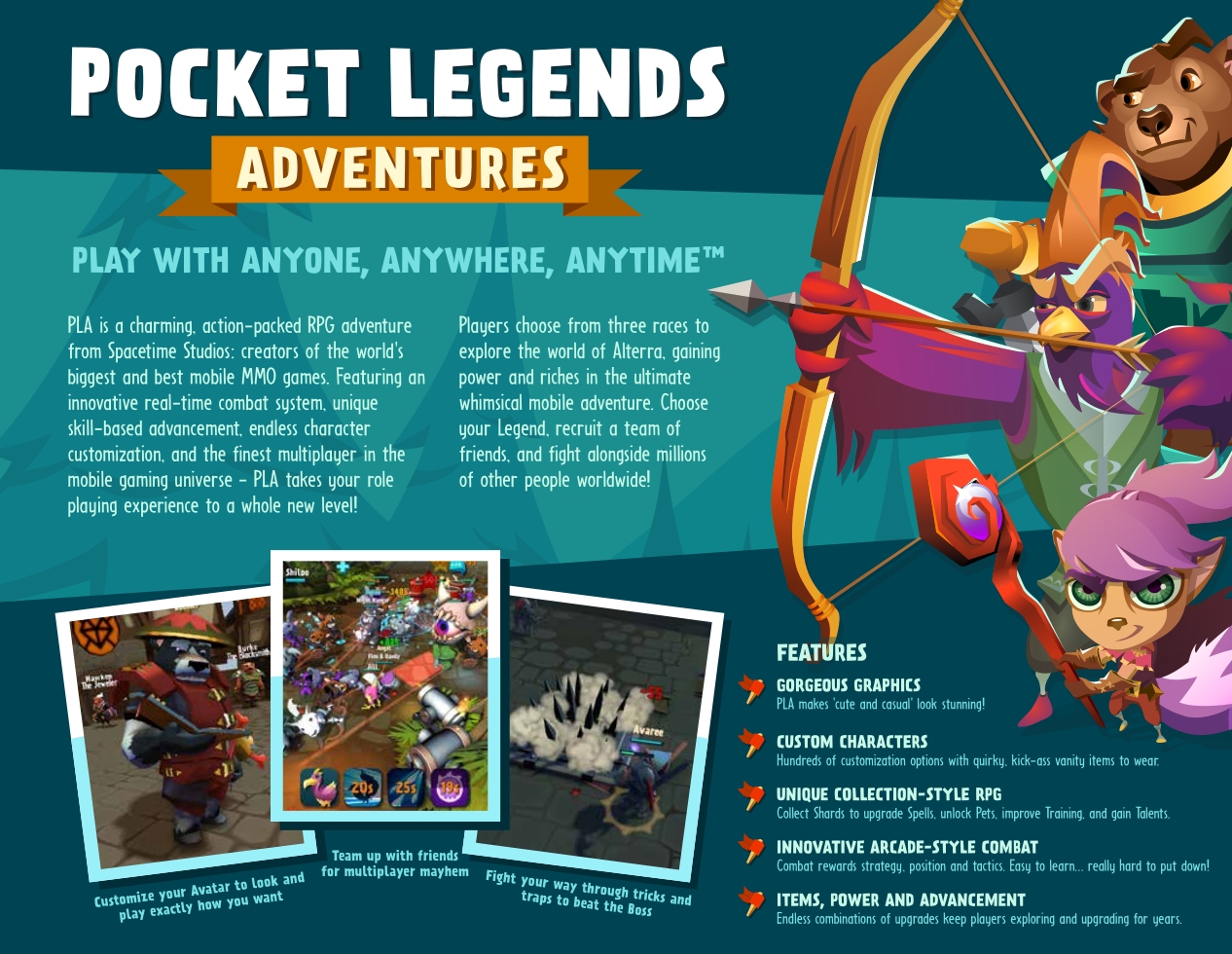 Spacetime studios doesn’t, and hasn’t made any mmos. They are actually one of the companies that are guilty of trying to skew the defined meaning of mmo into being meaningless.

They only offer 4 to 8 player games with a tiny lobby of not even 100 people.

Uh…why is the visual identity so similar to Gigantic?

An MMO in all but name. Apparently the stigma against the term “MMO” is still in effect.

Being able to play in portrait mode is a good change, imo.

It feels like there are a million mobile MMOs right now, but I really do remember playing the original Pocket Legends a few years ago and basically relived that feeling I had the first time I ever played a real MMO: “Wow! This is online? I’m playing with real people?”

It’s strange to think that that game would be the one to make me feel that way, but at the time, my dream for a mobile MMO was so great. It was nice to see something even somewhat realize that.

Now in a world of countless MMOs on my phone, it’s clearly not that great of a game, but
I might try this version just out of respect for Spacetime giving me that initial “wow!”. They certainly did pretty well with Arcane Legends, so maybe they’ve learned a lot since then!

There are a million, but most are crap :D The vast majority are pay to win, which Spacetime stuff never was. They’re low on content and rely mostly on trying to get people to PvP after going through the little content they have, or making it absurdly difficult to slow you down. Spacetime instead (usually) gave you a great many areas to go through.

I’d be very interested in something new from them that followed their old MMO / online multiplayer games. Lately they’ve been releasing various Clash of Clans clones and lots of clones of others PvP games. I would love to see the old MMO games again from them instead.

You seriously got excited about playing a game with 3 other people? You also thought 4 total players was massive?

In 2010 when phone games didn’t really do that yet, absolutely.

At the time I first found Pocket Legends, everything on my phone was either single player or a Mafia Wars-type game.

That first time I felt like I finally had something resembling an MMO in my hands wherever I went was exciting.

Now they’ve gotten better in the sense that you can almost always see more than 4 people at once, but put yourself 7 years ago, and that’s a lot more of an experience than it is now.

The Daily Grind: Would you give an MMO as a gift...