Nielsen has a massive “fan report” out this week dubbed The E-Sports Playbook, covering audiences in the US, UK, Germany, and France and focusing on e-sports fans as a market. There’s a massive breakdown of demographics that will suprise nobody, like the fact that millennial men are the core audience for watching e-sports, and they aren’t into actual sports or TV.

One of the more interesting surveys included covers whether fans believe e-sports are real sports (over 50% do) and whether they think it belongs in the Olympics (less than a third do). I thought we’d replicate the latter part of the survey for today’s Leaderboard. Knowing that e-sports are already being included in multiple sporting games in Asia, and given Nielsen’s clear lean toward its being an inevitability, what do you think?

Do e-sports belong in the Olympics?

Here are the standings from Nielsen for comparison: 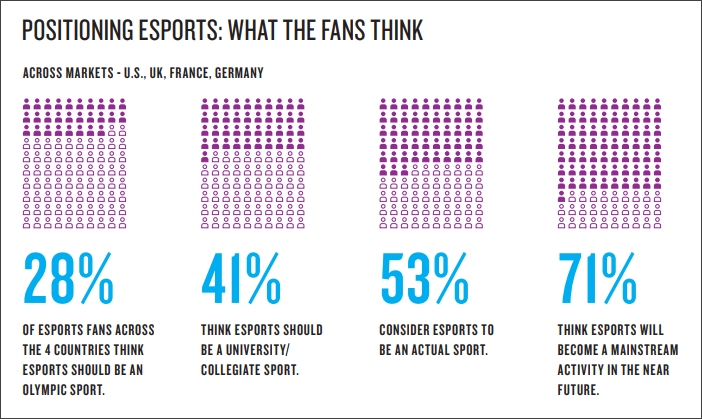 NO NO NO and NO. Listen, I have nothing against e-sports what so ever but the Olympics should remain a competition between athletes and by most definitions an athlete is “a person who is trained or skilled in exercises, sports, or games requiring physical strength, agility, or stamina”. I don’t care how you try to twist what it is, gamers are not inherently athletes. Playing video games does not require physical strength, agility, or stamina.

Let e-sports be its own thing. Create an Gaming Olympics even. Hold different events there (shooters, fighters, racers, etc). I just can’t fathom considering a gamer an Olympian; an Olympic Medalist, an athlete in the same category as people like Michael Phelps, Simone Biles, or Usain Bolt, people who train and put their bodies through immense physical strain to be the best at what they do. It’s just not the same. I’ll vote against this in any way I possibly can.

I guess if people enjoy watching… cool, but I will never support it.

I view e-sports as sports. But I view the Olympics to be properly about physical sports – aka athletics.

No. Olympics are physical sports, they always have been. This is why you don’t see chess or poker at the Olympics.

No but i don’t think pro. athletics don’t either so to me the Olympics are a joke now. Not even surprised they are thinking of doing this. The Olympics are not the great event it used to be. And the NBC coverage sucks so badly.

Not at all. It is competition, that’s true. But, it is not about athletic prowess. Let it stay on the commercial side or go in gambling type of tournaments.

I think ESports should be treated as sports, but tacking it onto the Olympics is stretching it too far.

I want to see esports be more mainstream, but since I don’t get two craps about olympics or the drugged-up players therein, I wouldn’t care or want to see them associated with it. There’s nothing “sacred” about the olympics and it’s just as much of a drug-fueled mess as any other professional sport. But hey, if that’s where you feel you have to look to find someone to idolize for some reason…

When given a choice between gamers competing on an international level under the thumb of a corrupt organization or a greedy corporation, I’ll choose corporation, because at least they are going to make it entertaining to watch.

Because they’re not athletes!!

So because some neckbearded geek can build a better Hearthstone deck than your average 14 year-old, now he deserves to be in the same ATHLETIC competition as people who’ve dedicated their entire life to strength, conditioning, and training their body to represent their country in the most coveted tournament in human history?