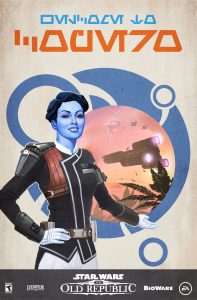 The developers for Star Wars: The Old Republic held their Cantina Tour event just outside New York Comic Con last night. To help promote the SWTOR content “Traitor Among the Chiss” coming to the game this fall, BioWare developers as well as favored Star Wars novelist and creator of the Chiss species Timothy Zahn spoke about the newest planetary addition: Copero.

At the NYCC, BioWare Creative Director Charles Boyd mentioned that Zahn was a key consultant in the creation of Copero, a planet located in the Chiss Ascendancy. “It was a fun chance to explore Chiss culture that hasn’t come up in the books yet, like Chiss structures and rituals,” the official SWTOR Twitter account quoted from Zahn at the event. “It’s fun to start theorizing about how the Chiss could have withdrawn from the greater galaxy over time… between the Old Republic and the films, and possibly explore how that happened in a future update.”

END_OF_DOCUMENT_TOKEN_TO_BE_REPLACED
To cap off the event, fans were given swag — t-shirts and posters — with Chiss-related art and logos, including a poster that reads “Welcome to Copero” in a vintage art style. Then for everyone at the event and on the internet at large, BioWare uploaded a teaser trailer to YouTube. We embedded the poster image, the teaser trailer, and a Periscope recording from Louis aka GamerGuy11B, who recorded the event live.

If you want to watch the #SWTOR NYCC cantina a very nice twitter user named Louis is streaming on periscope: https://t.co/lwGgqhMxz5

As a big fan of the Chiss, I’m hyped about this announcement.

A shame it’s not canon.

Tim Zhan doesn’t come cheap, he is one of the more expensive writers out there….so much for the notion of SWTOR not being supported by the publisher any longer.

I love how they improved the Chiss by making them all look like they are drunk or high… but hey. at least now i know exactly where they are looking at…

But is it going to add up to another chapter that’s less than an hour of actual content?

I like that poster! Star Wars was inspired by the old serials like Flash Gordon so the art style suits it. It was also amusing to see Theron’s already lame haircut taken to the next level.

Whoa now! That might get me to come back. T-Zahn consulted on Copero? Hmm…. it’s worth a look I think.

Good to see SWTOR hasn’t completely thrown in the towel. Maybe they haven’t at all. idk. Cantina events can be good for the game when there is really something to show or talk about.