Want to try out Albion Online? Do you want one of your friends to play Albion Online? The latest leaked information about the game promises that fans will be able to accomplish both goals in the near future. According to the leak, which comes through a Redditor whose past leaks have proven accurate, players will be able to purchase a trial for seven days, with the full amount reimbursed to the player’s account once the trial player purchases a starter edition.

Players who take part in the paid trial will have Premium status during the trial. No timeline has been specified at this point, since it’s not yet been officially announced, but hopefully it’ll bolster the game’s population and give new players a good reason to get into the game. 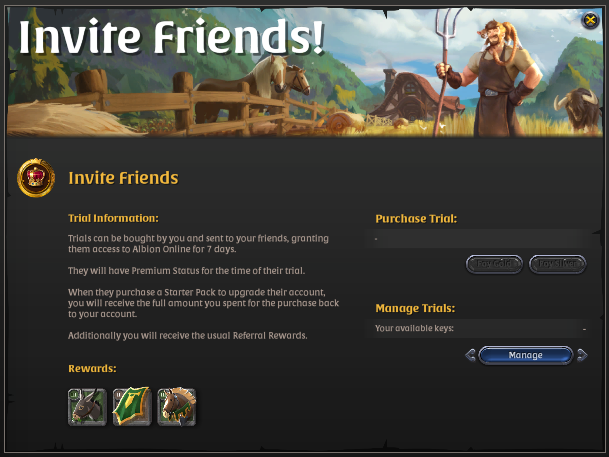 At first I was excited to see a free trial option.

Then I saw how they are doing it. Screw them. Mindsets that make decisions like this are why games fail and get shut down.

Okay, in game currency is used to ‘purchase’ these trials for friends. That’s a different matter than what it seemed at first.

Might want to get that clarified, since it takes looking at the picture to get that information. It should be front and center, since people will be thinking they have to drop $$ for a trial.

“players will be able to purchase a trial for seven days”

That is nothing I would ever consider for any game – much less this one.

But first they need to squeeze every dime and nickel out of the sheep !

I first read that as “refer a friend-with-benefits” and wondered how they’d go about confirming eligibility..

That was exactly what I first read, and was thinking “wow, that’s. . . odd”

The Daily Grind: What MMO needs a waaaaay better tutorial?

Grab a MARS closed beta key from Subgames and MOP and...