END_OF_DOCUMENT_TOKEN_TO_BE_REPLACED
Let me make an agreement with you, dear readers: this column about Final Fantasy XIV will not talk about the housing situation in Shirogane at all. If you’re wondering “why wouldn’t you cover that,” the answer is that I already did and you can read the whole feature on that. (You can also read the follow-up.) So for the remainder of this column, we’re going to talk about all of the other features of this particular patch, which seems like a better use of our time anyway.

Heck, the whole stupid housing mess was only released with this patch, it’s not like the mechanics or anything are new.

And hey, there’s some good stuff going on with this patch, along with parts that are well worth discussing for where they don’t work as well. So let’s dive right in, starting with the obvious centerpiece of every patch, the continued expansion of the game’s storyline… as perfunctory as it may feel sometimes. Some mild spoilers are possible, so be fairly warned.

Let me be blunt: this patch feels entirely like it’s meant to clean up loose bits of storytelling from Stormblood’s main scenario, specifically the Ala Mhigan side. And while it’s possible that we’ll get some more payoff for some of this in the future, an awful lot of time is devoted to a storyline that I’ve been personally tired of since it was introduced pre-Heavensward.

The problem isn’t that none of this is important; the problem is that so many parts feel like either belaboring a foregone conclusion or switching gears to something largely unrelated. This is, in fact, one of the major elements that I was worried about when Stormblood so neatly wrapped up its story; unlike Heavensward, you don’t have that lingering tension to propel things forward right away. Heavensward ended with a satisfying conclusion that made its next story beats have an obvious path, but this is largely about putting paid to long-established backstory and finally wrapping up affairs in Ul’dah.

It also has to deal with the fact that, well, the story doesn’t necessarily have a lot for everyone involved to do right at the moment. Lyse has places to go, and it’s pretty clear that Arenvald is being buffed up into a more important character, but the story clearly feels like it needs to make some use of Thancred and Y’shtola despite neither of them being relevant any more. So for every good bit of character dialogue, you get some painful bits where someone needs to be accounted for long enough to get shuffled out of focus.

All of that is not to say that it’s bad; it’s just kind of a patch of trimming up the edges. It answers some questions about what’s going on with one of our lingering villains and does a good job of tying stuff together, including the consequences of a rather perfunctory Primal fight late in the MSQ. It also features a really neat solo instance to cap things off, so bully for that.

What’s really bad is that it has perhaps the weakest post-conclusion teaser scenes that we’ve had in a long while. Usually we get a few teasers about what comes next that pique curiosity, but here there’s only one that seems really interesting; the other one feels like it should be resolved within about five seconds with zero drama. Ah, well. 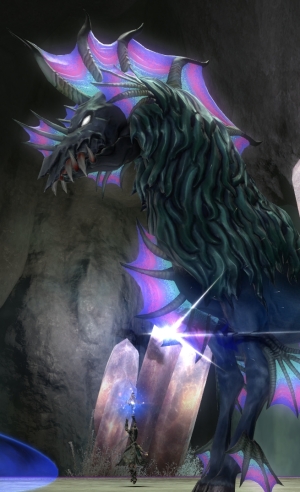 The down side of this dungeon is that we don’t really get the lore I would have liked for it; we have other reasons for going in besides Skalla proper. The up side is that despite any anxiety over a new dungeon, this one manages to fill out the Expert rotation nicely, feeling no more challenging but also amusingly novel.

Boss number one manages to make interesting use of push-pull mechanics, and it’s also a good example of how to make a boss where one failure won’t destroy you but repeated failures will. The second boss, on the other hand, really goes all-in with its transformation mechanic; it feels like a fun little mini-event to keep things engaging. And the last boss just makes good use of stacking up familiar (but unusual) AoE patterns in unique ways, so it winds up feeling like a very different fight even though you’ve no doubt seen the markers by now.

The dungeon also lets you turn into Sad Droopy Ghosts every so often, and boy, this is what I want to do forever. I love the sad droopy ghosts and want one as a minion. They’re great.

Of course, by this point saying that FFXIV has well-designed dungeons is almost a tautology. This one isn’t unusually better or worse, despite not having another dungeon to serve as a point of comparison. I still feel like we’re going to have to wait a bit to see what the re-allocation of design resources produces, because while this is a fun dungeon, I don’t feel like it quite fills two dungeon’s worth of design time.

Doth thou… desire the power?

Trying to clear the Royal City of Rabanastre on the first day was the sort of frustration that usually makes me want to quit the game and video games in general. It kind of colored my experiences with the dungeon as a whole, but that may be a good thing, seeing as my first impulse is to just roll in the dungeon like a damn chinchilla.

Hell, this series just took music from Final Fantasy Tactics. Like, not remixes, not revisions, not “bring in old MIDI tracks as a joke.” It’s just music from FFT, straight-up.

And it works, and it brings a tear to my Ivalice-loving eyes. My adoration of Ivalice is well-known at this point, and I would have been plenty happy to just have a taste of that here; the fact that it blends in so well is just icing on the cake.

And then you actually get to Rabanastre, and you wind up facing two intensely frustrating bosses in short order. Hashmalum in particular is a damn iron wall, rather ironically preventing groups without a decent sense of order from getting any further in the dungeon. Both he and Mateus even feel overloaded with mechanics; the ice-skating bit with Mateus alone feels like it’s got too much stuff going on at once that you could leave out and still have a sufficiently complicated fight, while Hashmalum’s golems just make things more demanding, not more interesting.

Fortunately, the last two bosses are a fair bit more less punishing, and the “split up and recombine” segment is fairly neat. Considering how rarely the Mhach series asked for players to break up by alliance parties, there’s something to be said for every boss having a sequence requesting three separate groups; I think it’s a bit too common for those segments to result in instant death when failed, though. You do it twice on Hashmalum, even.

The whole thing also really sells these as basically mini-Primal fights, which I have mixed feelings on. On the one hand, it blurs the lines between the game’s various sorts of content, and it makes each fight feel a bit overloaded. On the other hand, it also conveys a good sense of how powerful these entities are, bringing in the important elements of the Espers from Final Fantasy XII. I’m a bit sad that we won’t get to see the whole cast, but the promise of more has me invested.

Oh, and then there’s the fact that the raid literally promotes the idea that perhaps all of this is, in fact, the framing device for Final Fantasy Tactics writ large. So that is some next-level headgame glory.

Story-wise, I have to be honest, I’m not totally feeling the Kojin. It’s not that I don’t like the Kojin, it’s… well, the same problem that we had in Heavensward’s beast tribe quests, only magnified.

The beast tribe quests for the 2.x series were engaging partly because they were so different from what we already had access to. Sylphs were a bit of a borderline case, but the Amalj’aa, Sahagin, Kobolds, and Ixali all offered us a window into a completely different way of thinking. We barely interacted with these tribes outside of combat and these quest lines.

By contrast, Heavensward brought a fair amount of familiarity with the Vanu Vanu and the Gnath before we ever fulfilled quests for them. There were more cultural touchstones to explore, stuff that was glossed over in the main story, but we still went in knowing full well that it was possible to engage with these tribes outside of battle. And then we had the moogles, who aren’t even a beast tribe and certainly didn’t feel unusual; most of the zone already involved questing with moogles.

Now here we are with the Kojin, and the storyline in the region involves extensive partnering with the Kojin and understanding how the Kojin think about things and engage with the world. While the core story is written well, it feels less like a revelation and more like bookends, which is something less than engaging.

On the plus side, well, the quests are fun, I like these turtles, and they’re worth a hefty chunk of experience as hoped. So while the story may not delight and amaze me, I can’t complain that the whole thing doesn’t work well.

There’s more to discuss, yes, mostly of the smaller variety… but I think that’s a good place to stop things off. Feedback, of course, is welcome in the comments below or via mail to eliot@massivelyop.com. Next time around, I want to talk about squadron missions, alliance roulettes, and the stuff that really could use an update in 4.2 (or, in some cases, even sooner).