END_OF_DOCUMENT_TOKEN_TO_BE_REPLACED
Two of my absolute favorite “inconsequential” elements of Lord of the Rings Online have to be the Haunted Burrow every Halloween and the whole Bingo Boffin saga, the latter which I just enjoyed for the first time this past summer. When I discovered that these two features were on a collision course during this year’s Harvest Festival, I about fell off my chair. I might have even ranted a little to my kin about how I was disappointed that no one informed me of this fact. You think that I should start reading patch notes or something…

Since I have run the Haunted Burrow to death (pardon the pun), I eagerly turned to devour this new scrap of holiday content and to reunite with one of my favorite characters in the game. Ever since I’d finished up with the wonderful conclusion of the Bingo quest line, I’ve been secretly hoping that this wouldn’t be the end. That the developers would, one day, bring back this character and Bingo would ride again.

And while his much smaller quest series for the Harvest Festival is a breezy and mostly unremarkable affair, Bingo Boffin brought back his goofy charm — and a shocking twist that might be hinting at dire events to come in LOTRO’s game world. 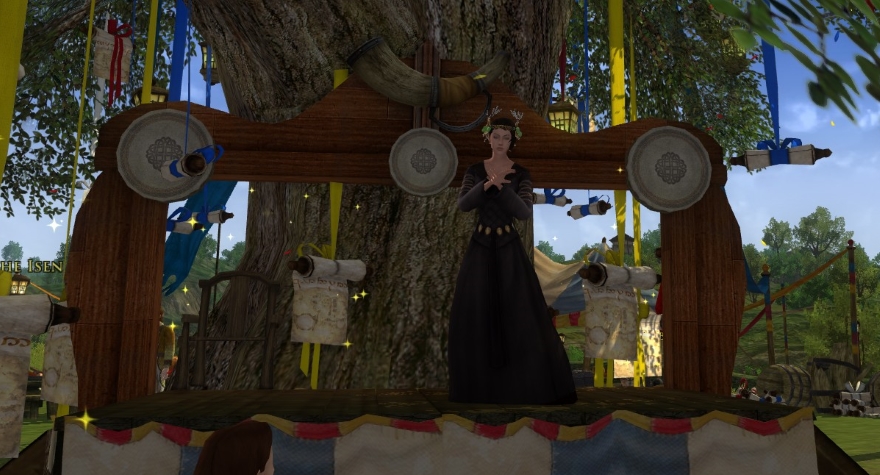 The core of the 10 or so Bingo festival quests mostly revolved around the (seasonably appropriate) theme of fear. As befitting Bingo and his enormous Boffin clan, it’s nothing truly serious or world-shaking, but rather a glimpse into seeing fear from a naive Hobbit’s point of view. There was fear of dancing in front of others (which I personally share), fear of being disturbed from a good nap, and even fear as one Boffin explored the Haunted Burrow.

As I said, small potatoes, but I was enjoying it even still. I think I was still riding a surprise high from being reunited with the Boffins and willing to put up with their silly nonsense. I had forgotten there were so many of them…

Part of Bingo Boffin’s purpose is to allow us the experience of looking through the eyes of a novice, as it were. We as adventurers have grown so hard and experienced that it takes the whole of Mordor to shake our resolve. A fake spider in a Hobbit hole or a guy going “boo!” in a bear costume isn’t really going to cut it, but it’s nice to be reminded that not every character in the game world is where we are at. Bingo was always about pulling us back to our wide-eyed, gullible, clueless days of gaming, and it’s in triggering these memories do we find in ourselves the patience to put up with whatever goofy tasks they have us do.

I did enjoy the short instance in which the Boffins gathered around a campfire at night to regale each other with spooky tales. I don’t know if there are a whole bunch or just three stories from which to hear, but I did like the ones I read. I got a laugh out of the one Bingo shared, because it was a retelling of the classic “Red Shoes” fairy tale.

But while we are enjoying stories, this quest arc hits us with a surprising twist. Spoiler tags ahead in case you haven’t done it yet!

So as I’m calming down one unreasonably frightened Hobbit who freaked out over the stories, I encounter a spectre with a dire warning:

“There can be no reparations for the hurt that has been done. In one year, all will fear the parting of the wood! None will escape the curse of the eerie acres! Despair and repair to your holes, for none but one will laugh when all is done!”

It then disappears and we’re left scratching our head and wondering, what the heck? I can’t recall any other time when the developers put a cliffhanger in game for something a year away, but that seems to be what’s going on here. In fall 2018, something bad’s going to arrive with the Harvest Festival, something to do with the trees and the “eerie acres.”

Since there’s no other information given, we’re left to wildly speculate what this means. One theory is that this references the upcoming Scouring of the Shire, although I don’t think that quite fits. The Scouring will be its own update and not part of the Harvest Festival, and besides, there’s no way that SSG is going to fix such a big patch to a very specific time window a year out.

What intrigues me in this speech is the mention of the “none but one will laugh,” suggesting that there is a single mastermind behind whatever is coming to the Shire. We have a mystery afoot — and I hope that Bingo gets on it by the time the next festival rolls around!

On a different note…

I know I was pretty harsh on LOTRO last week, and I firmly believe that it’s important to give praise as well as criticism where it is due. And so I want to say that it was a great addition in the last patch to include a way to filter items, quests, and (most importantly) sounds.

This is a feature that I wish ALL MMOs would include, because there is nothing more annoying than having to hear a shrill or grating sound over and over again without any recourse other than to disable the audio completely.

Well done, devs. Glad to see we are still getting useful quality of life improvements even in 2017.