Late last night a couple of interesting announcements came through the Twitter pipeline about ARK: Survival Evolved — namely, the ability to sleep on a bed upon logging or to handcuff someone else to it! No, really: With the release of version 273, players will be able to chain/handcuff other players to structures like a bed or chair. Those shackles will persist through logging out, so whoever is restrained will remain restrained. We’ll leave speculation about just how that feature is going to be used to your imagination. Players will also get to log out on a bed (although they could wake up shackled to it!).

This release, which also includes various fixes, additions, and optimizations, is slated to drop today. So, off to bed with you! 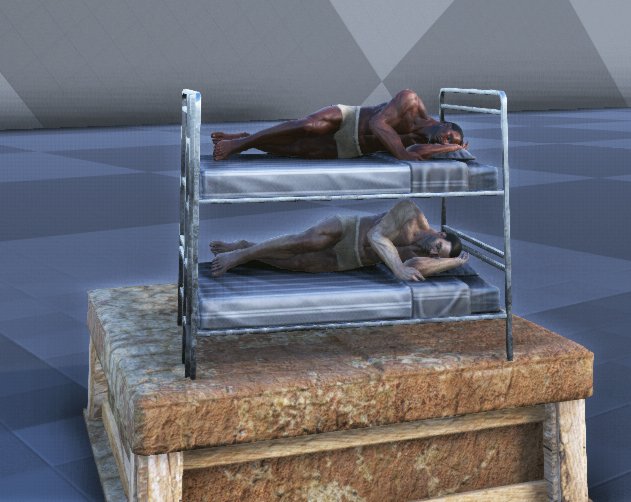 After your nap, you can catch up on more Aberration new later today in our The Survivalist column!

Welp at least they are fet friendly

Having been dealing with Federal Estate Tax lately, your comment baffled me for a few moments =P

Regrettably, nobody has ever cuffed me in ARK. #AlwaysABridesmaidNeverABride

But but but, can you dye the cuffs? :P

I’m handcuffed to a bed right now, so this is really great to hear.

Look forward to it, once I’m… not handcuffed to a bed anymore.

*Jokingly: You may want to sit down for this one…*

Forced captivity mechanics. A succinct reminder of one of the several reasons I decided not to play (yes, I know there’s PvE servers, but if the design includes such things as this and offline destruction of stuff… I’d rather not support it.

I assume that custom servers can just disable it, so you’d just have to stay away from the ickier servers.

Unofficial servers(where the majority of the steam pc players end up playing) have the ability to do pretty much anything in regards to this.

1. There are settings(and you can even see them in single player too) that allow for blocking/disabling the engrams to craft for example the handcuffs or any other ones.

2. Offline raid protection also works on pve servers(not just pvp servers that use it) to prevent both structure and player/dino damage offline and was integrated into the core game a while back. ORP by the way is on official servers too. Additionally, there are other features that exist to help bolster this and mods that can do more if so wished.

3. Server owners can also enable settings that prevent decay timers and structural damage at any time online or otherwise(though typically structure damage setting is not used on pvp servers for obvious reasons).

All in all due to so many settings choices, modded content(which is what Ark’s main focus is and why development of it is so well supported by the devs), and more, the variations of servers and game play are robust and the concerns Mann expresses are a non issue.

If I understood correctly, his concern isn’t about being subjected to those systems, but rather that he isn’t willing to give any money to devs that put that kind of gameplay in their games.

Which, BTW, is in large part why I never purchased ARK. I’m a sucker for survival games that can be played either PvE or offline, but if the dev does something I really disagree with, even if it won’t affect any game modes I would play — such as the already existing ways to keep other players captive across logins — then I’m not keen on allowing any of my money to reach that dev.

The game does suffer from the focus on public PvP official servers. The flightspeed nerf was the worst of this. The game is fun, enough to play, but the lack of careful balance really does show.

The point is that they designed that, on purpose, as part of their official design. Sure, the custom servers (as I noted with saying I know there are PVE servers) are different. I’d rather not support games that develop those mechanics, though.

So can you kidnap other players and chain them to something as bait for like a T Rex or a shark?

Going a little Conan are we?

Neverwinter gives you a taste of its reimagined Sharandar