Surprise! ARK: Aberration, the survival sandbox’s next expansion that was slated to launch this month, is delayed. Shocking, I know. Actually, if any fans were actually surprised, they obviously haven’t been following ARK: Survival Evolved very long. The delay, along with a other news, was announced during Twitch Con 2017; Studio WildCard showed off the expansion to a host of streamers who, in turn, showed the game off to the rest of us. Fans got to see hours of Aberration gameplay, learning little tidbits about the world and its unique flora and fauna as streamers experienced the malfunctioning ARK for the first time. And the world does look fascinating!

Besides the delay and the peek into the underground world, we learned that the Structures Plus mod will be officially integrated into the game. This is fabulous news for builders who’ve been waiting a long while for this feature to get some attention. And for those who want some real-world ARK goodies, the ability to purchase the The Collector’s Edition of ARK: Survival Evolved sans game and expansions was also announced. Also, ARK itself and the expansions are on sale this weekend only.

Not meeting launch dates is kind of a thing for Studio WildCard, so I am not exactly sure why it came as a surprise to anyone that Aberration is delayed. I would have been shocked if it launched on time! Still, I agree it sucks. And it really does not help the studio’s reputation. Devs would probably be better off giving larger windows of time for release like fall or Q4 instead of a precise month. People do get upset when what they are told turns out to not be true, and it’s worse when it happens over and over. There’s quite a bit of trust that is eroded over time until you simply can’t believe what devs say. During some of the livestreams, Jax talked about needing to do more optimization and such, so hopefully that is happening (although optimization would still be nice to have on the original Island map as well!).

That said, there is still excitement for the expansion. It’s quite a unique world and will be bringing lots of new things to discover and new places to explore — two things I am personally passionate about. So it is just a matter of waiting even longer. How much longer? I wish we knew! 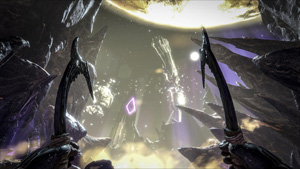 Putting the delay aside, I thought seeing more of this underground ARK was great. Watching the climbing mechanic with the picks was fun, and gliding looked like a blast. I’m not put off by the lack of fliers in the expansion because the gliding lets you be airborne for a while, be it by a mechanical apparatus on your back or by a dinosaur. Besides, if you zoom past everything up high, you will undoubtedly miss a lot down below. And I don’t want to miss a single nook or cranny.

Other than flying/gliding, one of my favorite mechanics is scaling walls. Using the picks to get around really did look neat, but I am more excited for rock-scaling dinos! Moving from along the ground to up the wall to upside down under an overhang is just too cool. I know what the first things I want to tame are.

A number of the streams also showed off gigantic crab mounts. Just because Rexes and Gigas will not be in this world because of their size does not mean everything here will be tiny. Survivors will be plenty puny compared to a number of the monstrosities. Then again, death will also come viciously from the tiniest of inhabitants. And I am sure the first time a Reaper Queen’s baby dino erupts from my chest Alien-style will freak me out. That is a sight I can’t wait to see, even if survival isn’t likely. Death will also come in the form of environmental hazards in Aberration. Basically, there will be death. Plenty of death. You can watch the VODs of these streams for yourself and see.

Another thing I noticed in Aberration was that bridges are in and working. Not just any bridge, but a long span without any additional supports. This is totally awesome and necessary for the new world, but I have to wonder why we still don’t have it in the base game? That feature has been promised and pushed back forever because devs said they couldn’t get it working quite right. Well, it is obviously working. I sincerely hope that bridges aren’t an expansion-only feature, and we see them in the other iterations asap.

Speaking of building, there is some really, really good news for folks who love the construction aspect of ARK…

The triumvirate of awesomeness for me in ARK is dinosaurs, exploration, and building. The first has been addressed quite thoroughly with all the new creatures introduced into the game. The second has been bolstered by different maps and expansions. That third favorite aspect, however, has been long neglected by devs. Well, no more! The popular Structures Plus mod (S+) is getting the Ragnarok treatment — meaning it is being officially integrated into the game. And that means the range of functionality of ARK building is going to exponentially increase. Halle-freaking-lujah!

S+ offers many more structures, improved core mechanics, and lots of extra features. The possibilities have me all amped up to get in and start some new building projects. Sadly, we have to wait. The integration is just in the conceptual stage right now, and devs are “deciding which features [they’ll] be bringing over, which will be locked into custom settings, [and] how [they’ll] be implementing it.” How the mod will impact the balance is also a consideration. “There are important factors we’ll need to consider regarding the mod and it’s impact on the balance of the game etc,” WildCard says. “It is a very large and in-depth mod, and we want to ensure that we get it right.”

Previously, the collector’s edition of ARK: Survival Evolved could be purchased only with a brand-new copy of the game and the expansion season pass. Unfortunately, that kind of screwed over all the people already owned the game and didn’t want to pay for it again. For those fans, Studio WildCard has introduced a collector’s edition sans the game elements. This delivers a number of real-world goodies for folks to enjoy. My favorite would have to be the leather-bound explorers notebook. For the price of $69.99 (in North America at least), you get:

These physical goods editions are limited, so the studio encourages you to get them quick if you want. Once they run out, they are gone for good.

Just today ARK and it’s expansions went on sale on Steam for the weekend. The base game itself and the Scorched Earth expansion are both 50% off, $29.99 and $9.99, respectively. The Explorers bundle, which includes the game and a season pass is 42% off for a total of $60.54, and the season pass is $33.74 for 25% off. However, those prices all drop if you own any combination of game and expansions.

If you already own ARK, the bundle price drops to $32.05; those who also own Scorched Earth will see the bundle price of $17.80, which is 60% off. The season pass alone is $18.74, so folks will save one dollar by getting the 5% discount with the bundle instead of buying the season pass separately. Hint: If you already own only the game, buying Scorched Earth separately first (at 50% off) and then buying the explorer’s bundle will save you over $4.00!

You mention there is a collectors edition minus the game available for 69.99 in the U.S. I’ve looked around and cannot seem to locate where this is or was available. Any help as to where I can find this?

Thanks for the details on how the sales work if you already own X, Y or Z. The discounts aren’t obvious from the steam sale page and when checking out with the Explorers bundle it warns about already owning Scorched Earth.

Yah. Cool thing is steam takes off price for the things you already own, so my bundle price (I own Scorched Earth) is much lower than other folks who don’t. I’m thinking I will get the bundle, then I can stream Aberration and whatever comes next.

While Triangles and stacking Foundations are basic things found in other games with buildings now I just can’t help but think they’ll end up neutering most of the features that makes S+ desirable ultimately leading to people still needing/wanting a mod.

I can see from your list how some of those are pretty controversial items. I’ve just heard so many requests for it for the improved building. I wonder how WildCard will “balance” it? it will be something to watch for.

I mean I loved it. Couldn’t play without S+ as a mod anymore. What you can build with it and manage is pretty amazing but some of those building features do require things that will be pushing boundaries.

I hope they add Structures+ to the core game, too. It’s annoying to have to run the mod separately and have two of every craftable placement object to search through.