As part of its CitizenCon 2017 reveals this morning – or this afternoon, if you’re local to Frankfurt, where the event is taking place – Cloud Imperium announced a partnership with Intel. Why do you care? The deal means an in-game Star Citizen ship will be provided along with your real-world purchase of an Intel Optane 900P Series SSD.

The ship itself is the Sabre Raven, and yeah, it’s an exclusive “for a limited time.” Chris Roberts himself is talking up the deal: “Our Star Engine developers have been working on technology to improve loading times using new techniques developed for Star Citizen and optimized for the Intel Optane SSD 900P Series, which is the fastest SSD we’ve tested. We continue to enhance Star Citizen so the performance benefits with Intel Optane drives will continue to grow, alongside Star Citizen, into the future.” 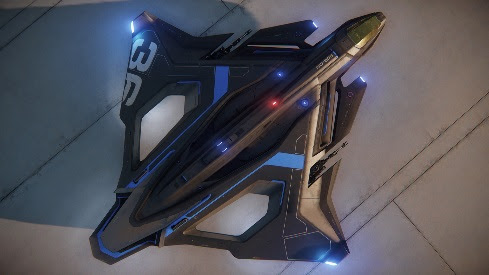 Here’s an imaginary collaboration between Star Conflict and Nvidia GeForce brand of graphic cards. Emphasis on imaginary; (but the ship is real). Maybe if Star Citizen makes that ship of theirs to adopt the form of a SSD, it would be a more interesting read.

I’ll wait for a better promotion. Like the Destiny one.

I thought that said Intel Optane STD for the WTF moment? O.o

When I bought my Maximus VIII Hero motherboard a couple years ago I also got a pixel ship, just it was a World of Warships pixel ship

That was snarky. :D Do you hate them selling pixels? ;)

Even with 22 more times of endurance the drive will still have died before the game gets released, I think this phuphar may come back to haunt them lol

I like this. This is a good way to promote. SSD life span is definitely a concern. I had a crucial SSD live and die in 3 years, whilst my aged Seagate barracuda terabyte HDD has soldiered on for many years. Currently using Samsung EVOs and they are doing just fine. But for how long?

I’ve had HDDs die within 6 months. Doesn’t mean HDDs are bad, just means I got unlucky. I’ve got 2 SSDs from 2009 in a second computer that see heavy daily use and are still fine. SSDs don’t have the lifespan issues that people seem to think they do. For the average user they will probably outlast the typical HDD.

And the literature said they lock down to read-only after they hit that limit. But my Crucial SSD just went dead. :(

yeah early 1st and 2nd gen consumer ssd’s were like that in spades. >>

there’s also normal hardaware failure rates. tho ssd’s do a bit better than average depending on teh brand. >>

Coming up on 6 years and everything’s working just f–

You know you aren’t allowed to post in tomorrows WRUP right? Feed the joke! Wait…is it a joke?

yeah early controllers were also a shit show. look at ocz, excelent speeds but such poor controllers (which trying to recall into ancient memory were third party and not limited to them) were such a shit show that they went out of business due to RMAs of them.

Yeah I used to have a OCZ that would blue screen randomly about three times a week, never knew when it was going to hit lol

Thankfully my Samsung SSD has been running flawlessly for over a year and a half now, looking at trying M.2 soon :)

m.2 is probably more bling than cost effective at this point, speaking as an owner of one.

i built my pc with no consideration for smart building so to say tho so in an m2 drive went.

but if i were on a any kind of real budget at all i’d go with a sata ssd.

You’re never going to reach the endurance of an SSD as a normal consumer. Especially now. I still have my Samsung 830 running nicely.

About as useful as a flightstick with a trackball on top of it :)

Endurance isn’t an issue, lots of SSDs are pushing a petabyte or more of read/writes before conking out and load times are more than fine.

Activision-Blizzard Q2 2020: Year-over-year revenues are up for the first time in six quarters

Bree Royce - August 4, 2020
19
NOW STREAMING LIVE ON TWITCH
OFFLINE - SEE YOU NEXT STREAM!
NEXT MOP STREAM
No events to display.

GDC Summer 2020: How Niantic adapted Pokemon Go gameplay in the time of COVID-19

Perfect Ten: Then things to do when you just want to chill out in an MMO

The Daily Grind: Who is the greatest female NPC in an MMO?

Ashes of Creation’s newsletter gets pumped for Alpha One

TERA NA’s next PC update will bring a 64-bit client and...