Last week’s (last) call for tavern and inn images seemed to bring out the nostalgic in all of our readers. It certainly didn’t take much for people to share their favorite hang-out spots and the memories that ran through them.

Let’s start with Camelotcrusade’s seemingly innocuous Star Wars: The Old Republic cantina: “While I know there are better Star Wars cantinas than this one, I chose it because in the early days ‘let’s meet at the cantina’ was our rendezvous point on the fleet. After you’d done your business, we’d meet there to decide what to do, or for RP.

“Since the fleet was a big circle, and both hemispheres had similar decor on the inner rings, it was a lot easier to go the wrong way than you’d think. I wasn’t the only player making a lap while others where already queued up. I could figure out where the center was, though.” 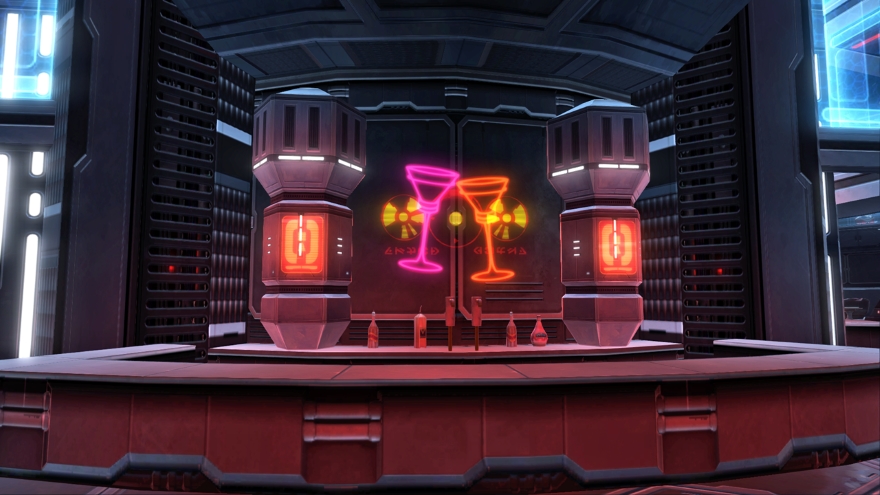 Our next stop on the pub crawl is World of Warcraft with Mysecretid!

“A late contribution,” he writes. “My favorite inn/tavern in a game right now has to be the tavern in my character’s Frostwall garrison in World of Warcraft. It’s just like your favorite tavern in real life, but with Orcs. Actually, I’m pretty sure Orcs drink at the local pubs around here, now that I think about it…” 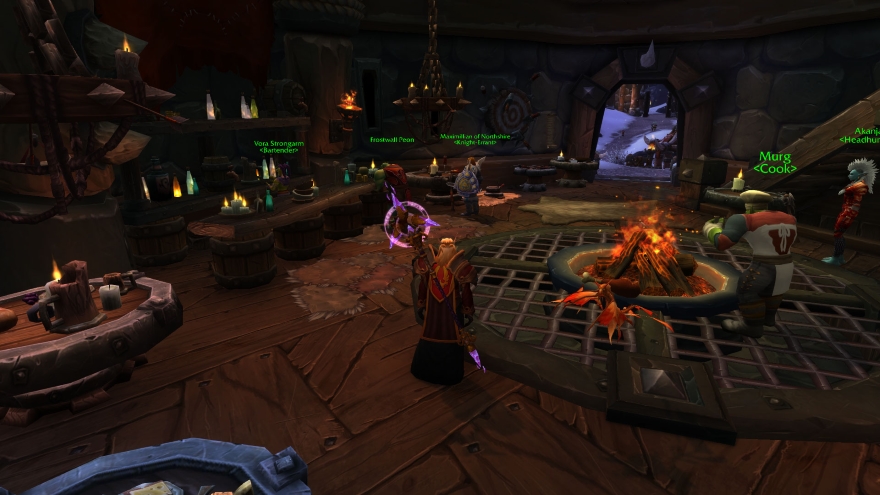 “So, tavern or inn?” asks Rafael12104. “It seems that this a misnomer where I am playing. You see there isn’t that last friendly home before the darkness. In Blade and Soul there are other much more fantastic locations that serve the same purpose.

“Next there is Mushin’s Tower. A place to swap tall tales, trade tips, and settle scores when needed. It is a training ground, but in a social function, very much the town inn except with target dummies and arenas of death. A very relaxing place for BnS citizens.” 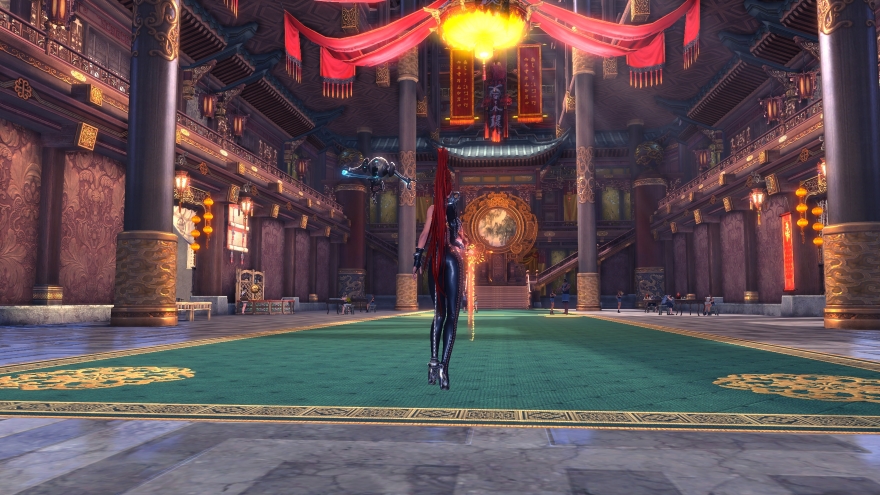 Now that we’re in lively spirits (thanks to lively spirits), we can endure a few minutes with Lord of the Rings Online’s High Elves and their new starting zone.

“Haven’t seen it much chronicled here, but starting a High Elf in LOTRO takes you through an amazing introduction,” said Melissa. “You’re part of the battle before the Morannon, the Black Gate of Mordor in the 2nd age where Elendil and Gil-Galad led the Last Alliance of Men and Elves against Sauron, where he was overthrown and the One Ring cut from Sauron’s finger. It’s a really amazing sequence. You see all these epic heroes from the Second Age, and also all of the Nine Ringwraiths assembled — and they gave them names. You fight on a battlefield strewn with bodies, orcs and trolls battling men and elves… it’s darn amazing.” 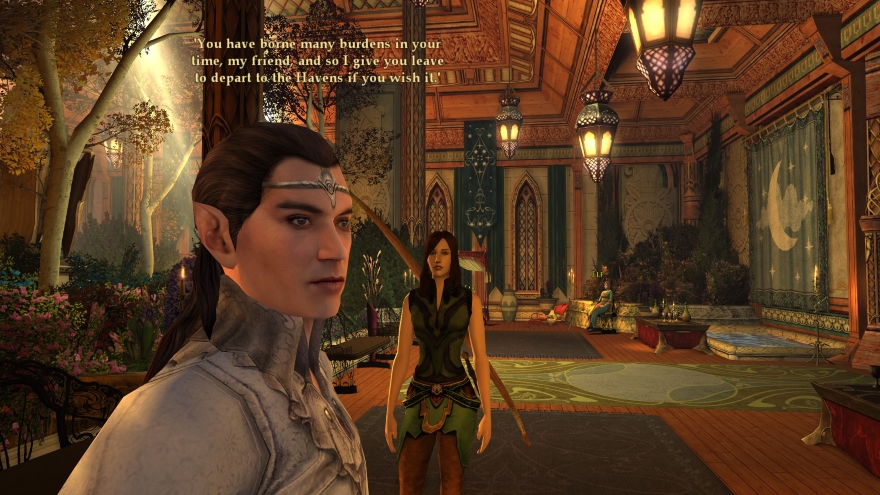 Shake off that hangover, Guardians, because the world is ended and the remnants need your help to endure the aftermath. Zulika Mi-Nam took this breathtaking Destiny 2 shot for us.

“Here is Destiny 2 looking Halloweenie at times,” he said. “Been playing with the graphic settings a bit and found my happy medium to get a consistent 70-100 fps, but by cranking the resolution scaling to max and maxing everything else out it even made my 1080ti cry.”

With BlizzCon this past weekend, chances are that you’re either dipping into Blizzard’s library or thinking about past experiences in the studio’s games. So why not share a Blizzard game screenshot for this week’s challenge and tell us of a memory or two?

Wow! I was on vacation so I am just now seeing the feature. Cool! ?

I don’t have many Blizzard screenshots, but here’s one from the circa 2005 archives. According to this important image, firing a lightning bolt at harpy reveals not one, but *two* secrets of the universe: 42, and boobs.

Thank you for the featured pic, Mr. Justin! Much appreciated

You say you want another Blizzard pic? Here’s one from yesterday that I like.

Usually, when you get a “find the lost child” quest in World of Warcraft you’re usually looking for a kid in the eight-years-old range because, well, the game has character models for that.

Imagine my surprise when my character was asked to find and retrieve a Tauren’s lost child, and what I found was a Tauren infant (calf?) in a basket.

It made me laugh as my semi-brooding Blood Elf mage had to strap the baby-basket onto his back, and cart the little gaffer home.

What you can’t see in the still pic, unfortunately, is that Blizzard had animated the baby’s face so that its eyes blinked in that wide, sort of stare-y way that babies look at things. Very clever. Very amusing.

Sorry its not an mmo screenshot but I am enjoying being an eagle in a certain recently released assassin based affair. I wasn’t going to buy right away as I can’t really afford it but well um I have an impulse buy problem sometimes and who needs food anyway. ;-)

Lol! Lived on the stuff during some lean years in college. 2 bucks 12 packs, gaming food if there ever has been any.

I’m surprised any one could live that long eating only Ramen.

Legend has it that the Dragon Warrior can exist solely on the dew from a ginkgo leaf and the energy from the universe.

Heh. Rafael did better than I did! There was a period in college where I basically lived on the large torpedo-bottles of Coca-Cola, and jumbo bags of peanut M&Ms …

… until the night I started having sweats and palpitations et cetera, and passed out on my apartment floor. I literally thought I was having some kind of massive heart attack and dying … but when I woke up hours later (feeling like I’d been hit by a bus) I realized that it was some sort of reaction to all that caffeine and sugar and non-food in my system for days on end. My body was basically saying “Smarten up kid, or we’re leaving!”

I thought I was so smart in college. I was such a complete dumbass.

I know of this assassin based affair. I will be joining you there soon. Not figuratively, it’s not that type of of affair, but spiritually for sure.

Thanks for the mention, Justin!

It happened to me a little over a year ago. My hard drive crashed. And this was no ordinary crash either as the mechanical head physically crashed into the platters. That’s nerd speak for, all gone bye bye.

And so went my WoW archive, completely. It’s better not to dwell on and things.

And so my contribution this week is provided by my BnS Blade Master and her firebrand I call Justice.

You may take my caps, but you will never take my pet frog!

You could of rolled a pink Lyn and called it a Gnome. Just hide the tail and ears somehow from the screen shot… >.>

Hmm. Food for thought. I have an open slot and I have yet to make another Lyn, blade dancer for example. Hmm.

Spoiled, I’d say. Wont even come out of his bowl unless there is food, a lilypad, and someone to carry him around!

Nothing Blizzard worth posting yet. Maybe. Instead, have last night’s Extra Life 2017 party in Agartha, complete with dancing CMs and giant Dreaming One mascots!

I have finished all of the Destiny_2 campaign and other PVE quests/missions and this left me at power level 272 which is not that bad. There are still some areas I have not explored/cleared so I will duck back in from time to time to turn those icons from medium grey to lightish grey at some point (ya it is hard to tell them apart). I do not believe I can do the grind though. Like the others say below taking shots in there is not easy so while I have seen some more great places there my pic well is dry.

Since shooters aren’t usually my thing, but I liked Destiny 2 quite a bit, I took a look at Warframe last night. While I have not played enough to make a call on it, what I have played so far is enjoyable. It looks pretty good (see pic), but I have to google a bit to learn about the systems as in-game there seem to be a lot of info missing – just like Destiny 2.

…the best thing about Warframe is that even though it is clearly sci-fi from just one glance, I can still be a stealthy headshoting archer.

i rigged up nvidia shadowplay to take screenshots easily. takes some rebinding in teh options settings as alt+f1 probably won’t play with the game with my experience trying to use the snipping tool but there it is.

Vanilla pic, and no this picture isn’t from a private server, it is legit from my Vanilla days. That is my wife polly morphed on her mount, kind of weird bug that existed back then.

A little rummage in my screenshot folder turned up this oldie from, iirc, the pre-WotLK event.
It could get quite messy in Stormwind back then.

Your death will be avenged!