END_OF_DOCUMENT_TOKEN_TO_BE_REPLACED
It may feel as if Path of Exile just came out with its The Fall of Oriath expansion, but that was last August. The time is quickly approaching for the next one! If releasing expansions were an Olympic event, Grinding Gear Games would win the gold medal every time. This studio delivers loads of new content like clockwork.

Now, I could sit here and heap praise all day, but I know you want to learn about all about expansion number… some big number. Lucky for you, I sat down with Producer Chris Wilson and got a tour of the goodies coming our way. So what is this next expansion and its accompanying new league about? It’s a sequel to Atlas of Worlds!

In September 2016, players were introduced to the world atlas, filled with end-game maps to complete on the way to fight the ultimate boss, The Shaper. On December 8th, this Atlas will be redesigned with significantly more maps and a second ultimate boss that is vying for control in War for the Atlas. And the new Abyss Challenge League starts up as well. Learn more about it all and watch the official trailer below!

If you thought you’d found and completed the majority — or even all — of the maps in the Atlas, that will all change in three weeks. The Atlas is getting quite the makeover, with 32 more maps, more paths to progress, and a visible ring in the center so that players can easily distinguish which maps are the hardest (and which ones they may want to be careful about wandering into).

The additional maps are more than just an increase in number; they are all new areas. “We’re hoping to have a lot of fresh experiences here for players in terms of types of tile sets and so on that they haven’t seen in Path of Exile before,” Wilson said. I toured a few of the new maps with him and was impressed with the new looks. I loved the use of verticality: The map where you have to jump from tiny pedestal to pedestal way up high looked like a challenge, and the one where the land was suspended over swirling space gave me a moment of dizziness. There were also maps with fire and lava — my favorite! Wilson assured me that these new maps will be interspersed throughout the atlas and not just concentrated in the harder areas, so players just starting will have the chance to encounter some in the beginning.

When players look at the atlas, they may see a corrupted area: a section of maps encircled by writhing tentacles. Those maps will have special effects. For example, the map that Wilson was showing off had entities that literally drained the color from the map and seriously weakened the player. Dispatching these enemies restored color and strength. Where do these entities come from? Over time, players learn that answer: There’s a new threat in town.

As awesome as the new maps are, this expansion isn’t called More Maps on the Atlas; it’s War for the Atlas. You can’t have a war with only a single side, so who else is involved? Let me introduce you to The Elder, the new ultimate boss. This guy is vying for control of the Atlas, opposing The Shaper.

Previously, players would work toward the center of the map in order to face The Shaper, who is creating and manipulating these maps. Now The Elder is here, taking control of maps to wrest power away from The Shaper. These are the maps surrounded by the tentacles, while the maps that The Shaper has control over will be designated by a starry field. What happens in his maps? Look out for anomalies that rip through the fabric of reality, obliterate a part of the map, and leave only a gaping hole behind. That isn’t the only effect, however. As Wilson told me, “There’s a pool of Shaper and Elder effects that you get when you’re playing in Shaper and Elder maps.”

So who will win in this war? That depends largely on you, the player, as you plays on your personal Atlas! “As you play maps, [The Shaper’s and the Elder’s] control waxes and wanes, and you have the ability to directly affect it,” Wilson explained. “For example, if you complete an Elder map, it means that now The Elder has lost control of that area, which may mean that now The Shaper can push into that area if he is nearby. Likewise, it’s possible to play Shaper maps and have a chance to stop The Shaper’s influence if you want to.” Wilson also talked about the strategic choices players will make in helping one or the other, or perhaps neither and keep them equal. Does it matter? Yes, yes it does.

For one, these influenced maps are not just more challenging but more rewarding. These are the only items that can have special mods attached such as immunity to fire on the ground or extra support abilities acquired without needing sockets. The items you get in the areas depends on which boss controls it. Some players may prefer to get The Elder’s items, while others may want The Shaper’s stuff, and still others may want both. But you have to keep in mind that if you are farming The Shaper’s areas for his items, The Elder starts taking control and there will be fewer Shaper maps to play. As Wilson explained, even someone who wants to fight The Shaper may want to spend time beating back The Elder just so The Shaper can recover and acquire more maps.

Also, after The Elder’s holdings get to a certain size, he is powerful enough to manifest in the map system. Four guardians will spawn, as indicated by special glow on certain maps in his area. Defeating those guardians allows you to face The Elder himself, just as defeating The Shaper’s guardians in the center allows access to The Shaper. Defeating the guardians and the bosses naturally opens up even more rewards. (Just a hint when you enter an arena for The Elder: You might be teleported to random other arena’s with different environmental effects during your fight.) And beating a boss doesn’t end the war as it will start back up again after a reprieve. That next timem the outcome could be different. “We are trying very hard to make sure that the game feels that it has kind of multiple endings going on depending on what course of action you take, so there will be quite a lot of stuff to be able to see,” Wilson said.

Expanding skills and other goodies

The expansion, while very focused on the war over the Atlas, has still more to offer players. Wilson noted that there are four new skills, six new support gems, and over 50 new unique items. The goal, he said, is character customization.

Plus, the new Necromancer skills aren’t just for Necromancers! Wilson showed off the new projectile skill Unearth, which does some damage and unearths a corpse from nothing. This can be combined many ways with other skills, like Cremation, which explodes the corpse in a fiery geyser. He also showed it off combined with the new skill body swap, which swaps the players position with a corpse and has an explosion of blood at both places. This can be used as a movement skill or as a non-stop attack.

“Corpses make a great resource in this game,” he said, “because when it’s going well you get more of them automatically.” The skill Volatile Dead turns corpses into fiery orbs that seek out other mobs to hit. A side benefit is you can use them as homing beacons to the next set of mobs! Couple that with the support gem Cast on Melee Kills and you get an unending supply of heat-seeking missiles instead of without having to manually cast each one.

Though it’s not necromancy flavored, Wilson also demonstrated the support gem Spell Cascade combined with the skill Frost Wall, which allowed him to place three walls to blockade and corral the mobs. All of these new skills and gems look like fun!

Into the Abyss league

And last but certainly not least, a new expansion comes with a new challenge league. This one is the Abyss League. It features fissures that crack on a map that players follow to holes where various creatures pour out. If players can defeat the mobs quick enough, the fissure will continue and more abyss holes will open.

“It is encouraging a risk versus return gameplay because it’s pushing you out of your comfort zone into harder and harder parts of the maps against more and more enemies, and the better you are able to do, the more stuff you will get,” Wilson explained. “It’s a bit reminiscent of the Breach League that we ran in the past, which had this type of mechanic and was our most popular league.” Apparently, players really like when they can interact with the map itself rather than solving something ion one particular location. He then noted that this mechanic can also show up in the new maps on the Atlas. Wilson then added that the team is working on as many random outcomes as they can before release. 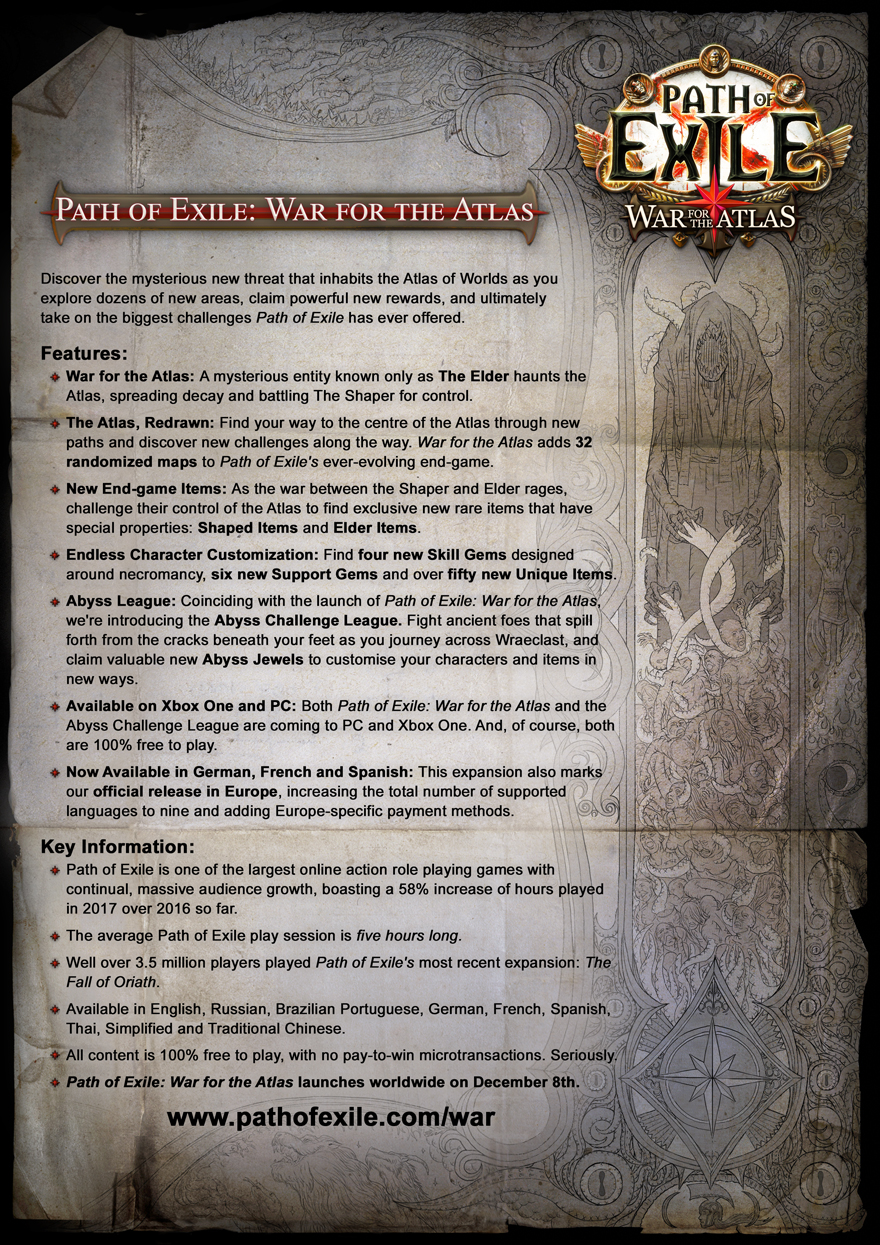 It said writhing at one point!

Oh god yes maps and mapping have needed something doing to them for a while as they were getting stale. This sounds like just the job can’t wait.

GGG keep outdoing themselves. I’m not one for maps, but this new mechanic adds another layer on top of the maps. If this gets me playing maps more I may have to grace them with another supporter pack, even though I’m already sitting on a ton of points (I’m not big on cosmetics).

New supporter packs too which look rather cool.

Eh really?
I was unimpressed.
Idk, this expansion might not be for me.

well, in about 3 months there will probably be another one!

The Daily Grind: What untapped folklore would you like to see more of in MMOs?

Space colony sim MMO SEED offers a look at how its...

Mad World interviews its writing team and further fleshes out its...

RuneScape patches in quality-of-life and asks players to fill out a...