I do think that we, as a culture, have become disturbingly obsessed with selfies, but I will always make an exception for anyone who finds himself standing in front of an enormous gas giant.

“I wanted to share my screenshot for One Shots for the first time,” sent in Stormheim. “The screenshot is from Destiny 2. I don’t still have cool stuff and gear, but its kinda awesome to take a selfie with Jupiter behind you.”

If nothing else, Jupiter has the effect of making the subject look thin and light in comparison. Kind of like standing next to Jabba the Hutt or a YouTube content creator’s ego. 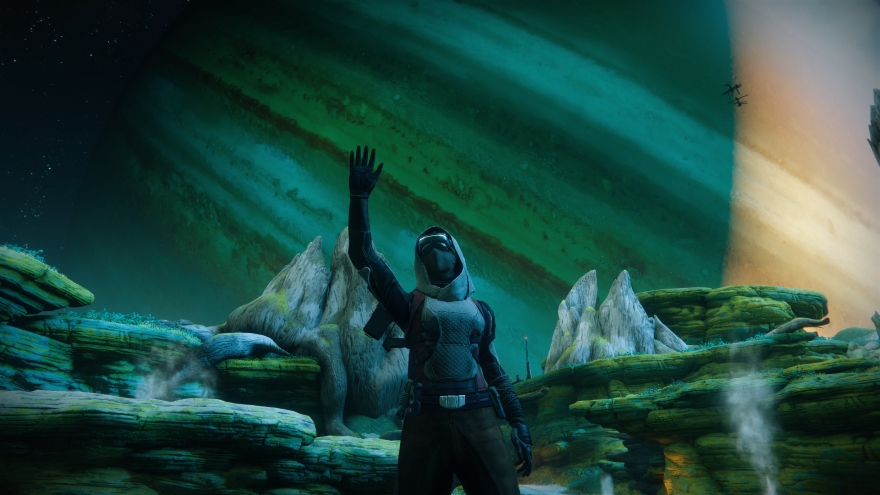 If your MMO has neat camera tools, don’t neglect them! I wish more games would have screenshotting features like Final Fantasy XIV.

“FFXIV has the /gpose feature and mid-fight I had the inspiration to use it. And yes, my character was dead coming out of /gpose, but the screenie was worth it!” said Toy Clown.

As a side note, is that a robot tree? Because the eyes. 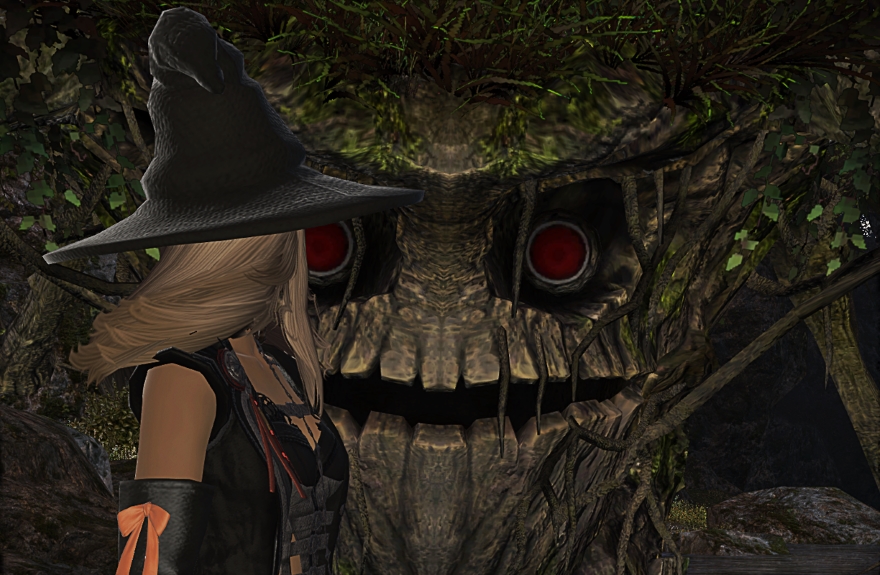 “I was in a family-friendly, casual guild in World of Warcraft, so for me the most ‘harrowing moment’ was trying to form a group for an instance,” writes Camelotcrusade. “Here I am in 2005 waiting for such a group. The other two gave up, but I’m sticking with it, and thanks to my regenerative troll blood I think I’m going to make it. (Some say she’s still there.)” 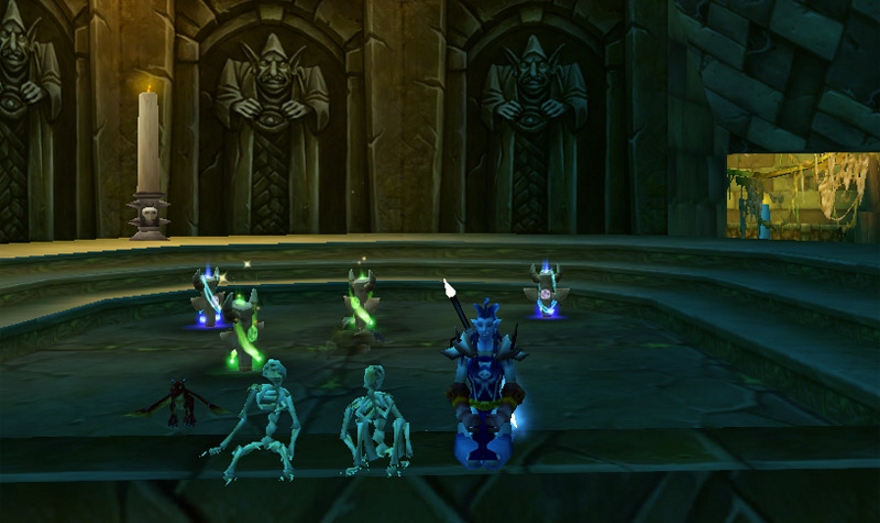 Everyone keeps raving about these Guild Wars 2 mounts, and darn it if Skoryy doesn’t show up other games with this sweet ride. As much as I applaud MMO artists for creating these living, breathing beasts of burden, it disappoints me that there is not maintenance involved. No giant poop scooping, no feeding it covertly underneath the dinner table, and no walks outside at 10:00 p.m. at night while your toes slowly freeze as your animal attempts to find that one square inch of the yard that she hasn’t peed on yet. 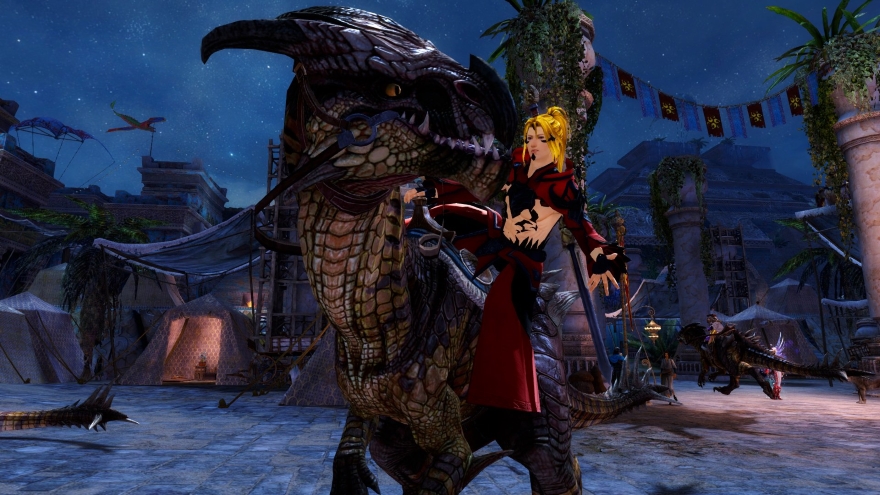 “The maps I always liked to play the least in Diablo 3 were the ones located in heaven,” Zulika Mi-Nam said. “However playing them in 3rd person sneaky bow mode is fun in Warframe.”

I really like the dreamy white look of this one. It looks like the future co-opted by Apple. 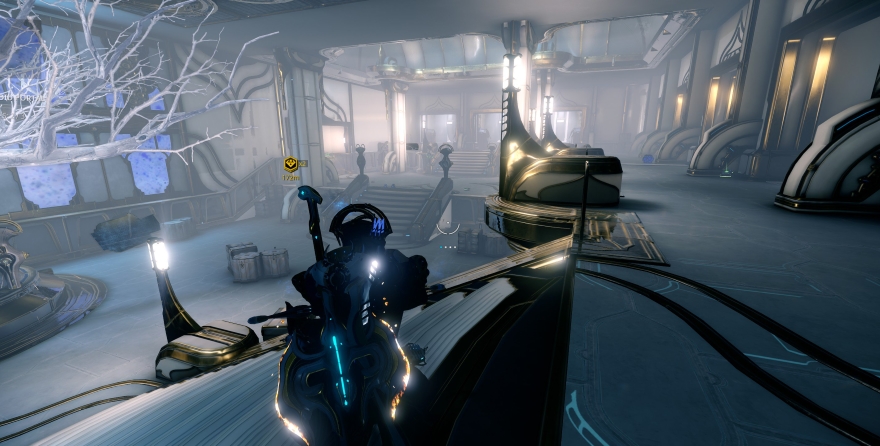 It’s time for your weekly screenshot challenge! The theme this week is “weird technology.” Whether it’s scifi, steampunk, or a gerbil powering a tank, let’s see pictures from MMOs that have some odd tech or equipment at play.

Ahh I missed this week’s column, I don’t know where the time went. Better jump over to this week, but at least wanted to thank Justin for the feature. Also, that DodoRex below. LOL!

Well, I could go back to SWTOR. Tech with Sith Alchemy gets pretty weird. And there are various games that include flying ships, as in galleons. That’s pretty odd since they still use rudders for some reason.

But, I’ll stick with BnS because there is all sorts of weirdness there.

In a world where martial arts dominates, technology is a destroyer. Take for example this screen cap of Xanos as an automaton. I’ll save the lore, but essentially this insane demigod is a mixture of metallurgy, electricity, mechanical parts, and dark chi.

It’s a warning to technocrats out there. Don’t let your tech become your god, please! ;)

And yes, that is a robot you are looking at. It doesn’t bleed and it hits like a freight train at full speed.

WIth barely a mention in The Elder Scrolls III: Morrowind, Tribunal member Sotha Sil’s previously hidden Clockwork City finally makes a grand appearance in ESO. Nevertheless, I tried to make myself feel at home in all the brass, glass and technolgy on a new Kogouti Fabricant mount and Scintillant Dovah-Fly pet.

Alas, I’ve really just begun the explore it, as I’ve still plenty of other quests in the rest of Tamriel to complete first, so the Daedric War story arc will have to wait a bit longer…

I’ll have to get in and play some ESO sometime. The graphics are certainly much better than I remember.

The game does look nice. But there is always something off putting when I play. Maybe the character models? Or the general aesthetic? Not sure what it is.

Well, I beta tested this game way back when, and the best that we could come up with is that they tried to deliver Skyrim online and couldn’t do it.

Now, the game has come a long way since then. So I’m not sure if that is still the “feel” of things.

In my opinion…
At this point it does a fairly competent job to capture the Elder Scrolls feel, and has indeed improved quite significantly over the last few years. The biggest difference (and it’s a big one), is that most of the single-player games lend themselves much more favourably to 1st-person views, whilst ESO players are best served in 3rd-person (although there are situational exceptions).

That said…the game is huge, deep, and allows everyone to do really whatever one wants, regardless of class or race choice. The loot boxes in other games (which I despise horribly), are relatively inoffensive, unobtrusive, and completely unnecessary…even cosmetically.

The last thing I can say to recommend the game is that it plays beautifully with a controller…which is a huge bonus when I want to relax a bit more with my feet up.

Okay, I feel like this screenshot challenge is just begging for screenshots from Rift, however looking through my current folder there’s not a lot of tech shots. I’ll see if I can work on that this week.

In the meantime, here are a few random pics I found whilst digging for a tech shot. We’ve got a random gate in Ashenfell, my new Sinister Cappie mount telling a fishing story (it was this big!), an image I plan on using when I finish my “Meatloaf’s greatest hits” cover album, and then a screenshot that always reminds me of a Star Wars cantina but nope, it’s a random dance party in Rift.

Riding a mouse? Yeah, you don’t see that everyday.

This is a poor shot, but here’s our gunship “Air Fright” from the Stream Team’s Halloween event in 2016. Two days to build and 10 minutes to send about ten thousand rounds at the DodoRex. We got him with about 200 rounds to spare.

Hitching a ride on a flying robot chicken I helped build in WoW.

Bonus: various shots including the shocking twist. “YOU MANIACS! YOU BLEW IT UP!”

That first cap is great. I had to look at it a good while because of the green haired dude. LOL.

noth found this out of the way area in the traveler hub in destiny 2 and claimed it as “my office”. we noticed that you can totally sit in teh chairs tho they are really huge chairs compared to the size of the player model so it’s all a bit silly.

got this team shot in the opening of one of our crucible matches. one of the rare times i actually see my helmet equipped.

and the fruits of yday’s labour in getting a more or less fresh toon from level 4 to 20 in a day, which didn’t quite happen but close enough for now. just need to finish the campaign and move high level guns over to make the exploity end game grind magic happen! XD