I feel like RIFT crossed that line with this mouse mount. It’s a little too on the nose with the whole notion of leveling in games being a rat race, eh?

“Here is my new Sinister Cappie mount telling a fishing story (it was this big!),” said Ironweakness. Frankly, I want to hear the story where someone captured a giant mouse and then trained it to provide transportation to battle-happy adventurers. 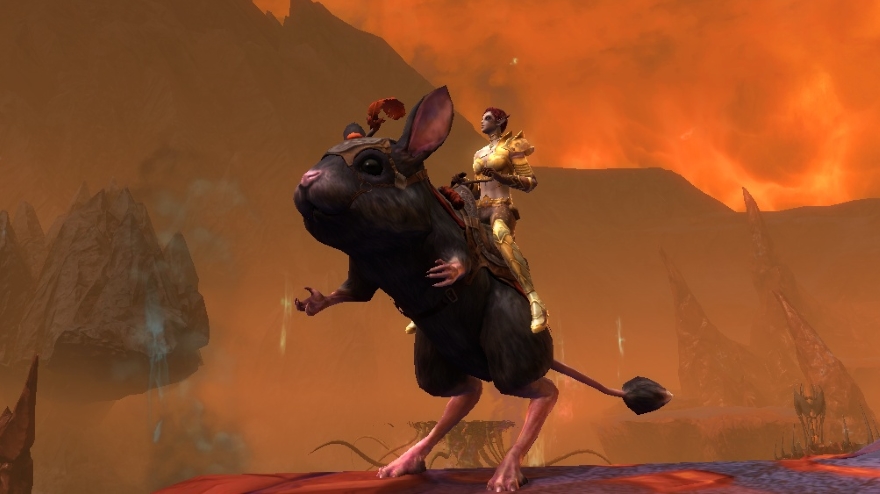 Last week’s screenshot challenge was “weird tech” in MMOs, and a few readers provided interesting examples, such as Rafael’s foray into Blade and Soul.

“I’ll stick with Blade and Soul because there is all sorts of weirdness there,” he said. “In a world where martial arts dominates, technology is a destroyer. Take for example this screen cap of Xanos as an automaton. I’ll save the lore, but essentially this insane demigod is a mixture of metallurgy, electricity, mechanical parts, and dark chi. It’s a warning to technocrats out there. Don’t let your tech become your god, please!” 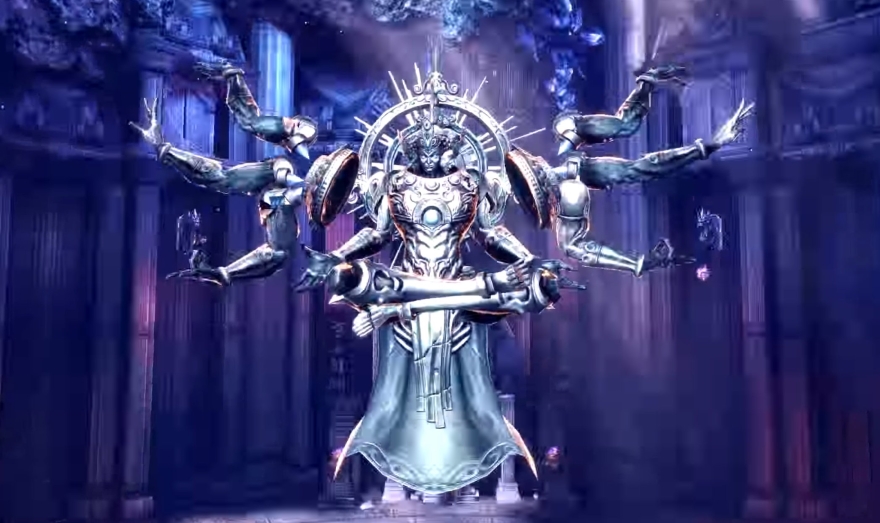 Rees Racer provides an example from Elder Scrolls Online, instead.

“WIth barely a mention in The Elder Scrolls III: Morrowind, Tribunal member Sotha Sil’s previously hidden Clockwork City finally makes a grand appearance in ESO. Nevertheless, I tried to make myself feel at home in all the brass, glass and technolgy on a new Kogouti Fabricant mount and Scintillant Dovah-Fly pet. Alas, I’ve really just begun the explore it, as I’ve still plenty of other quests in the rest of Tamriel to complete first, so the Daedric War story arc will have to wait a bit longer…” 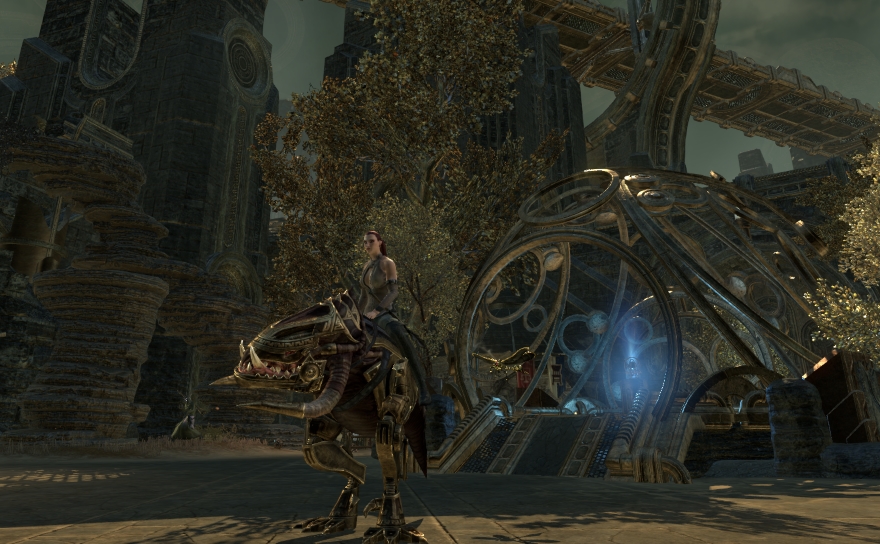 Or you could just hang out with the Gnomes in World of Warcraft, like Hirku here. He said that he was hitching a ride on a flying robot chicken, but reading into that expression, I really think that this is a very unique kidnapping in progress and that the authorities should be alerted and given welfare epics. 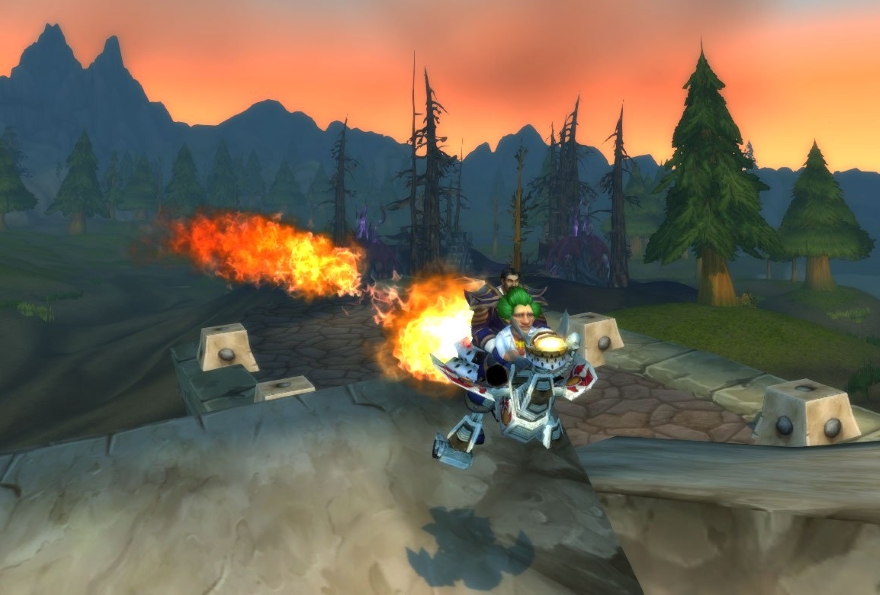 Since we were light on entries this past week, I’m going to have to subject you to one of my own pictures. Deal with it.

Secret World Legends players are pretty used to seeing Filth monsters freaking out and attacking them, but during one memorable Ricky Pagan quest in Tokyo, we get to see a Filth-infested guy rock his Elvis moves to a blasting boombox. Felt bad killing him, I’ll admit. 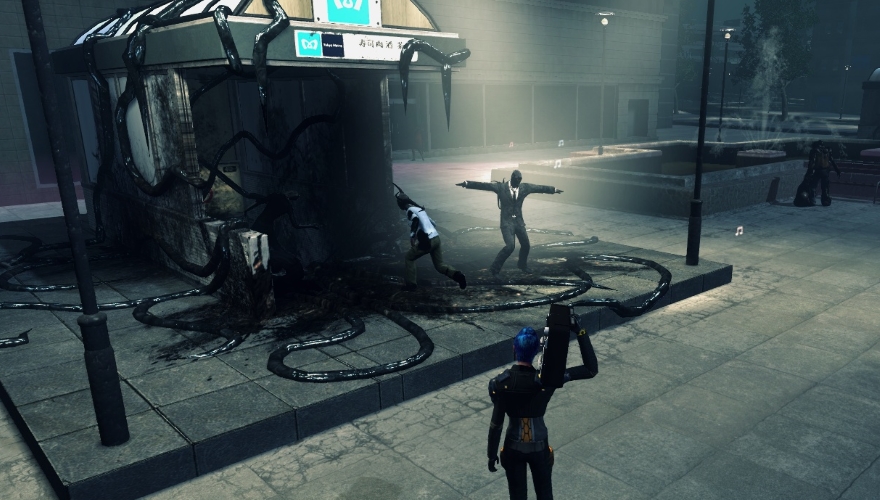 Pretty much any time that I try out a new MMORPG (well, new to me, at least), I end up taking dozens of screenshots in the opening areas as a matter of course. I bet some of you do as well, which is why this week’s screenshot challenge is to share pictures from the opening hour of your adventures in an MMO.

As you can probably tell by looking, Blook is not a quantum physicist.

Blook is an NPC companion you can unlock in World of Warcraft for your personal garrison in the Warlords of Draenor expansion.

Unfortunately, Blook can’t accompany you off-base on your WoW adventures — all he can do is stomp around the garrison looking large, but he does that bit well.

Adding Blook to your garrison is pretty dang easy; all you have to do is find him in Draenor and beat him in a fight. If you beat Blook in a fight, he will be impressed enough to want to follow you. Thereafter, he will greet you on sight as “Blook beater” :-)

If you Google: “World of Warcraft” Blook (include the quotation marks in the search) you should get various page hits showing you where to find Blook in Draenor. If this doesn’t work for you, you can always ask me in a reply here.

Amusingly, Blook is much, much smaller (maybe seven feet tall?) when you meet him in the wilds of Draenor. It’s only after he joins your garrison that he suddenly becomes baby-kaiju-sized. Maybe it’s what you’re feeding him?

Hahaha! I love it!

I didn’t last too long in FFXIV (and this is pre-reboot) so here’s my “early hour” entry.

As you can see, he’s got his eyes closed while he waits for blind moogles to finish dressing him. I mean, they’re done, but I don’t blame him for keeping them shut. He looks like Santa ate a wizard on his way out of the leather bar – and decided to keep the earring rather than give it to the little girl who bit him.

Oh and later, here is he trying to be a target for any stray arrows, just in case anyone wants to put him out of his sartorial misery. Either that or he just doesn’t know how to use a shield.

(FWIW: For me, this was a game where I liked the character models but near-universally hated my options for what covered them. C’est la vie.)

It feels like an age since I last played an MMO, so here are some pics from the early levels of one of my favorites. Enjoy the anime-storybook visuals of Twin Saga! There are lots of little details in the environments. One of them is in the running for the Utakata Stamp of Approval. (Yes, I take more than just memey dialogue screenshots in that game!)

I also think it’s cool to see what Justin is up to sometimes via the wonderful world of screenshots.

Nice. Thanks for the shout out this week, Justin.

As for this weeks challenge? Perfect timing. Just rolled a new Warlock. This little guy is going to have fun running around with new and returning players. :)

So, without further ado, meet Foliee. He is 1 minute old in BnS. Yup, literally just appeared and this is what he sees when he walks out the door in the Hongmoon School of Martial Arts.

Thought about going back to BnS and finally level a Force Master(iirc, the monk/mage hybrid) but, bleh, too much other stuff to do.

Now that the expansion and new race are available for points I just couldn’t resist.
This is from somewhere in the first 30 minutes of this characters life and I really, really wish I could think of a ‘You and what army’ joke right now.

The first time I realized I was listening to one of the filth-infected going over their grocery list I got totally creeped out. “Orange juice.. hrnnm.. tooth paste…”

I’ve put a lot of time into starting zones recently, what with trying to figure out what class/race I wanted to play during my dive back into World of Warcraft. The visuals of this aged game can actually be pretty satisfying at times, and I’m looking forward to seeing the more recent zone additions as I progress.

Here are a few shots from the Pandaren and Draenei starter areas:

Aye, the graphics may be older, but the visual design remains impressive.

My first hour in Landmark , a game I miss more than words can say

My first hour ended up with me working for crematorium… :(

Lol! You are going fast. I’m rolling a new toon when I get home and will catch up.

Out for Sunday brunch. Waffles!!!

BTW, anyone else want to join Uta and I leveling in BnS, now is a good time. :)

I’m going to be too busy to play in the near future, but I do want to get back into Blade & Soul. What server are you leveling on?

Yura is the name of the server. No worries. Whenever you are ready.

Yep. It sorta rhymes with YuruYuri. <3

Looks like my characters are already on Yura. Was there a server merge recently? Anyway, I am either Tea Cakes the summoner or Tiger Cookie the blade dancer. I have a naming theme going on. :P

Yup there was a server merger. Ok. All set when you are ready. :)

“…share pictures from the opening hour of your adventures in an MMO.”

Cutscenes are often a great place to take a good screenshot…especially in a game like TERA, where it’s difficult to get the camera in a good spot during the frenetic combat.

I know this took place very early in my progress as an Archer, as I didn’t play her for long because it wasn’t quite enough a visceral experience as playing the melee classes. Nevertheless, I love this shot, as it perfectly encompasses the overall motif of the game, as her posture and expression in this scene conveys in a meeting with her superior. She appears completely nonplussed and disinterested…and wants to say “Just send me out to kill…whatever. I can do it in this ridiculously inappropriate and ineffectual armour because I’d rather look good doing it”.

Playable Worlds’ lead designer: ‘Our industry does not thrive on ideas’

SMITE’s next god is Charybdis, the Ceaseless Whirlpool