You may hold Elves in high esteem, but the truth is that they are bonafide slackers. They live forever and can’t even be bothered to keep up with the weeding, so Elves make up some nonsense about communing with nature to cover for it while they binge on Netflix.

BalsBigBrother brings us our first pic of the day, this one from Lord of the Rings Online: “The one is from the High Elf starting instance, with this particular area the last part just before you are thrown out into the ‘real world’ of Middle Earth. Still amazed with how well the SSG folks do with their world building using such an old engine and saddened at times how divorced they often seem to be when it comes to actual player mechanics/fun.” 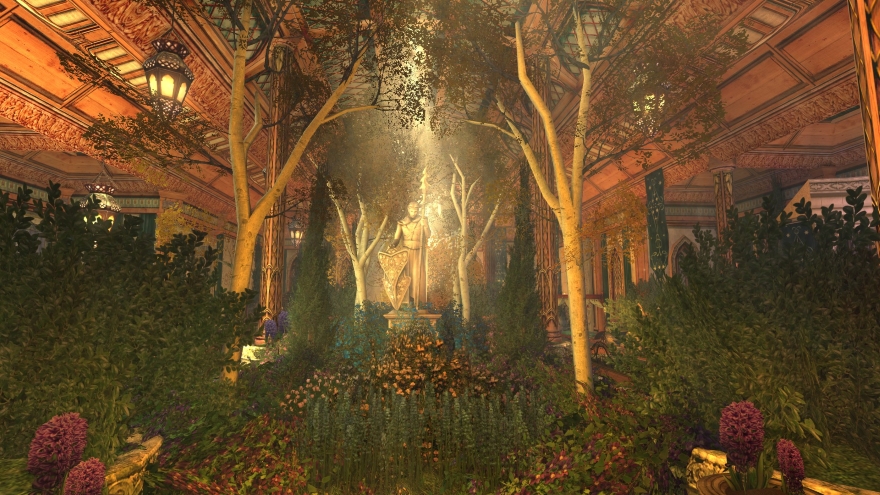 “This is Blook,” says Mysecretid.

“As you can probably tell by looking, Blook is not a quantum physicist.”

I have no idea what an Ogre quantum physicist would look like, so I’ll take your word on that.

“Blook is an NPC companion you can unlock in World of Warcraft for your personal garrison in the Warlords of Draenor expansion. Unfortunately, Blook can’t accompany you off-base on your WoW adventures — all he can do is stomp around the garrison looking large, but he does that bit well. Amusingly, Blook is much, much smaller (maybe seven feet tall?) when you meet him in the wilds of Draenor. It’s only after he joins your garrison that he suddenly becomes baby-kaiju-sized. Maybe it’s what you’re feeding him?” 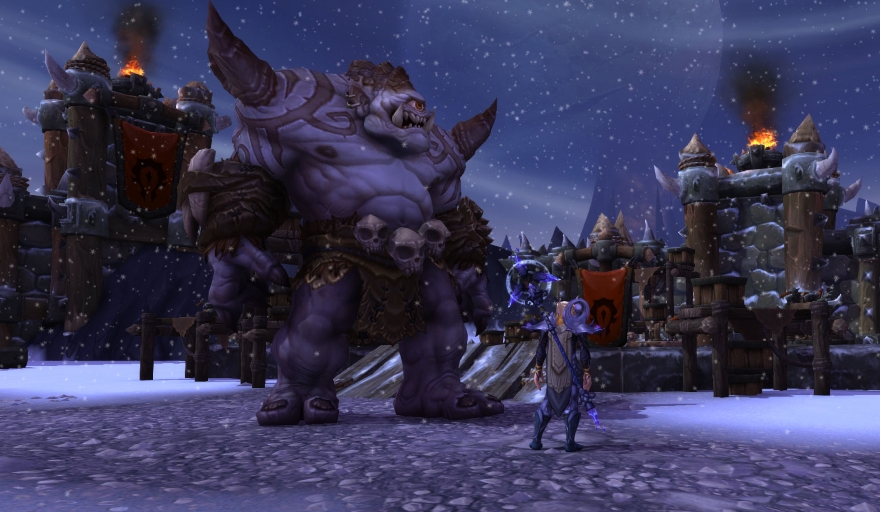 Camelotcrusade was the next reader who answered the call for screenshots from the first moments in a game: “I didn’t last too long in FFXIV (and this is pre-reboot) so here’s my ‘early hour’ entry. As you can see, he’s got his eyes closed while he waits for blind moogles to finish dressing him. I mean, they’re done, but I don’t blame him for keeping them shut. He looks like Santa ate a wizard on his way out of the leather bar — and decided to keep the earring rather than give it to the little girl who bit him.” 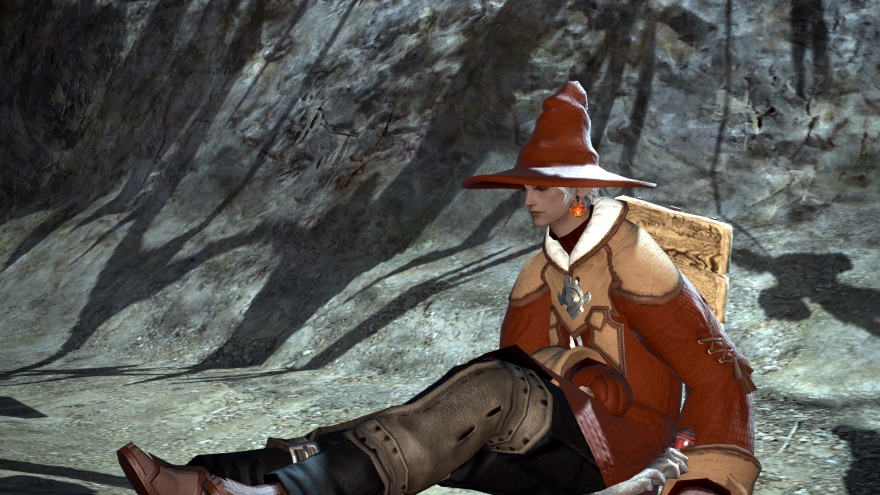 “It feels like an age since I last played an MMO,” said Vexia. “Enjoy the anime-storybook visuals of Twin Saga! There are lots of little details in the environments. One of them is in the running for the Utakata Stamp of Approval. (Yes, I take more than just memey dialogue screenshots in that game!)”

I never got that stamp. One day, I tell myself. One day I’ll get it and be able to go home and face my children with pride instead of shame. 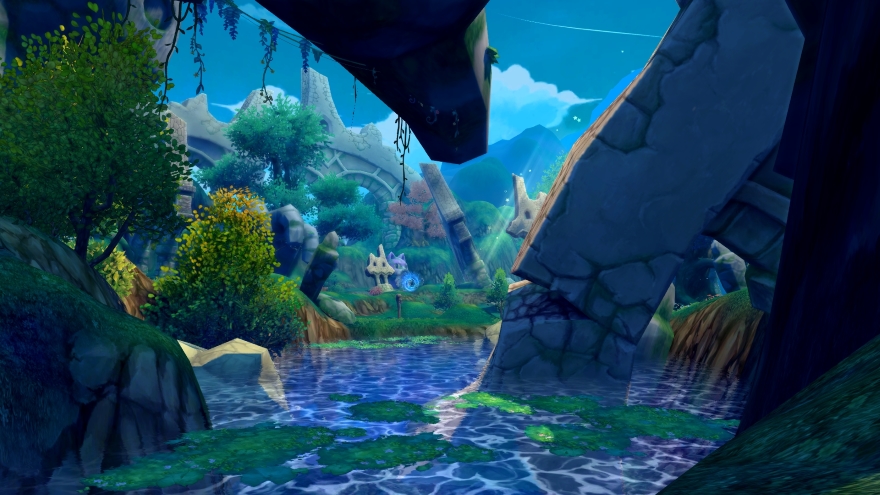 Here’s a mobid thought exercise: If you knew when your favorite MMO was going to be shut down in the future, would you go back in time and play it anyway?

I think Amorey might. “My first hour in Landmark, a game I miss more than words can say,” she wrote. 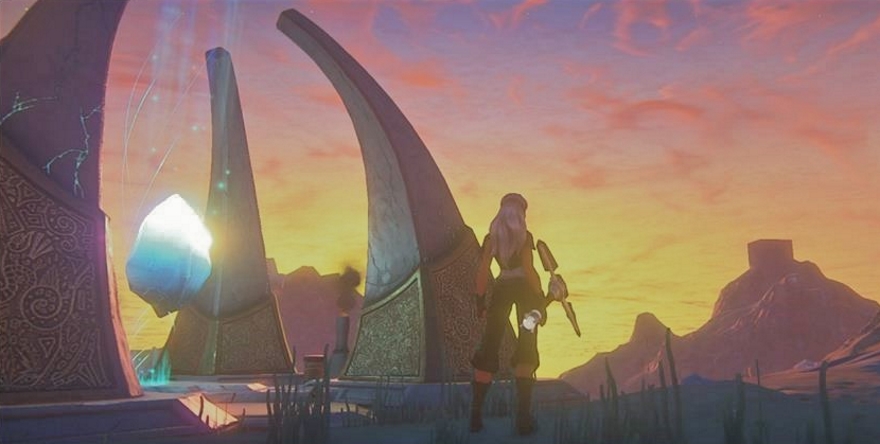 Envy. It happens, especially in MMOs when we look at others and what they’ve achieved or obtained. This week’s screenshot challenge is to show a picture or two of another player and something cool that they’re wearing, have gotten, or have built.

Another old CoH pic. These guys were level 40 (the cap at the time) when I was in King’s Row. Considering how grindy leveling was in the game at the time, I was a bit envious.

Oh…well Mr. rafael was in Heavens OutOfReach. So I couldn’t pull one of his toons to fill in for the selfie…

And being a desert zone and all, there’s isn’t very many other players out here. Kinda like the Southern Barrens (WoW) as it’s names sake implies; that is, currently devoid of PC activity. And I wasn’t going to traipse around looking for any. She looked cool though! <3

Looks great to me?!!

If you knew when your favorite MMO was going to be shut down in the future, would you go back in time and play it anyway?

In the case of Landmark, yes, I most definitely would go back in time if I could ;)

P.S. I will never forgive you Daybreak…never! *shakes fist*

For this weeks challenge, I don’t have much. I could probably find something if I dug through my archive but, meh. Need to get back to playing.

So here is a cap of my Gunner, Haliee, explaining this to a new found friend.

“So what? Just because all of your friends are mob trash doesn’t mean you have to be mob trash. Think about it. And why not take a shower too?”

Image One: Is from FF14. I just love how angry the sylphs look in the background, they look like a little gang.

Image Two: I love how Overwatch changes the weapons with every skin. Zarya’s Totally 80’s skin gives her weapon a boombox design.

Image Four: Have I ever experienced envy? Yes. I am envious of everyone who got the Totally 80’s Zarya skin this Halloween. It is so perfect.

Yep, I got it, envy me! But honestly.. I wanted the Zenyatta skin. Didn’t get it at Halloween, didn’t got it at Year of the Rooster(Chinese New Year). =/

Ya, I got the Halloween Zenyatta skin this year, in my first box. My boyfriend got nothing, I felt bad. Loot boxes suck. I wish you could buy the skins outright.

Next Screen shot is of the current race leader at the time …. can’t remember his name and the gear he was wearing was just the ceremonial “bug armor” that was exclusive to Guild Leaders (the stats on it were garbage).

Next one after that: that red armor was a exclusive to people who had attended Codemaster’s first (and only) game convention … it is from a line of armor who’s design was commissioned from Massamune Shiro (Appleseed / Ghost in the Shell) and needless to say I was salty that I couldn’t attend.

The next 2 are of me running around cloaked in another faction’s zone, ganking their low levels for fun and contribution points … the one after that is me standing on the edge of a safe zone, singing “this is the song that never ends” at the pack of high levels who showed up to try to drive me off.

Last one is my Level 41 Phantom “ID10T” …. I miss you little buddy, you got me through some rough times in my life.

*Grrrrrr* the upload order got mixed up …

Hot damn, I thought those screenshots looked familiar! Still have some good memories of picking up a boxed copy (!) a decade+ ago when it launched and enjoying myself for a while.

I finally joined the Warframe party a little later than many, but have really, really had a lovely go of it these last 2+ weeks (almost 80 hours already). I keep my nearby laptop open at all times to the Wiki, so I can make proper choices and get descriptions on all the equipment, items, lore etc.

I also quickly discovered there is, of course, another game within the game. There is a reason it is also known as Fashion Frame. Not only are the cosmetic options many, but also quite a few skins are apparently made by the community as well (for sale through Steam). The best place I’ve found to see the largest number of frames in one place in at Cetus, where I can view what other players find aesthetically appealing…or revolting, and perhaps get some new ideas to incorporate into my original costuming colours and accessories.

Many years ago I was playing EQ2 (you can see me in between the windows on my horse) when a player called “Nappie” flew by. It was only a fleeting glimpse, but he wore an outfit so bad that it transcended visual trolling and became its highest expression: Art.

Envious, I promptly inspected him and opened up the dressing room so I, too, could be like Nappie. While so doing, I noted he is of course a starving tailor, eschewing food, and surviving purely on style. For while fashion fades, style–they say–is eternal.

PS, thanks for the feature! As you can see, style strikes again this week.

And those pink gloves! <3

For me it’s the boots. Damn, Nappie.

Being a tailor is what really makes this work for me.

Colin Henry - August 11, 2020
5
NOW STREAMING LIVE ON TWITCH
OFFLINE - SEE YOU NEXT STREAM!
NEXT MOP STREAM
No events to display.

The Daily Grind: Do MMOs need to jump onto bandwagons to stay relevant?

Halo Infinite will be pushing back its launch to sometime in...