END_OF_DOCUMENT_TOKEN_TO_BE_REPLACED
My friends, I can see the future for Final Fantasy XIV. And by “see” I mean that I can guess at it with reasonable reliability.

As we move into the holiday theory, I figured it’d be fun to lay out a large-scale theory about the game’s future that’s based on a fairly thin slice of evidence that has every reason to turn out wrong or misguided. You can feel free to look back in the past and evaluate my history for yourself, if you’d like; as someone who has been writing about the game for years, I have lots of predictions for you to draw upon to see how well I tend to do at predicting the future. (About 60-75% accuracy, or something like that. Far from perfect.)

So let’s speculate, starting with the assertion that’s going to perhaps set up the biggest bit of debate: We have three more large boxed expansions coming. Anything after that is very much up in the air.

Consider, if you will, Final Fantasy XI. Square-Enix has a lot of information on that particular game, what with it having run for 15 years now. It also has a lot of data on the lifespan of a solid MMO, and considering what a huge impact FFXIV had on the company’s bottom line, it seems likely that this title will get to run its course. It also seems like a given that there will be another MMO in the future.

FFXI had five large expansions. You can argue that the last one came out after a gap, but not that it happened. And all things considered, a decade of live service and updates is something that Square knows the company can sustain without too much trouble. Thus far, we’ve had two; that leaves us three more.

But the game’s structure also supports this. The next expansion brings the level cap to 80, the one after that to 90, and the supposed final one? Level 99, the traditional highest level for the franchise. It flows together quite nicely for speculation about what will happen out to 2023.

That’s not to say that the game will shut down in 2023, just that we’ll get our last big doorstopper of an expansion then. Which means that all of our big final showdowns will take place then. And where will we go on our way? The game has helpfully suggested that, too, thanks to the innocuous titles of its zone preview videos.

Let’s consider the world of Hydaelyn for a moment. There are three major “groupings” of continents on the maps. There’s the three continents where Eorzea is located, with Eorzea, Othard, and Ilsabard all serving as “linked” continents. To the south, we have Meracydia, and to the west, we have the ambiguous and largely unclear “New World.” When we expanded into Coerthas and its surrounding areas, we got a video entitled “Tour of the North,” which made sense. Then we went to Ala Mhigo and Othard, and got… “Tour of the East.”

A simple look at the map will make it clear that there is sort of a big chunk of land that isn’t included with that particular tour. For that matter, Ala Mhigo is actually north of most of Eorzea, too. My general feeling is that these choices are not made idly or by accident. There’s a reason it’s “Tour of the North” and not “Tour around Coerthas” or “Tour around Imperial Occupied Nations” instead of “East.” Which means that setting it up as a tour of the North and East implies that there will be later tours of the South and the West.

Hey, look at that, the other embassy in Kugane is from Thavnair.

One of the fun elements about FFXIV is how stable the lore and the world turns out to be. It would make perfect sense for an expansion to send us to Radz-at-Han and then further south to Meracydia, a continent that has long been largely unexplored by outsiders simply because no one is welcome there. Similarly, it would make perfect sense for us to head to the New World, which we know is home to the Mamool Ja and has lots of different resources to offer, because it largely hasn’t been explored yet. That’s two expansions right there, both with obvious suggestions for new stuff that we could find. 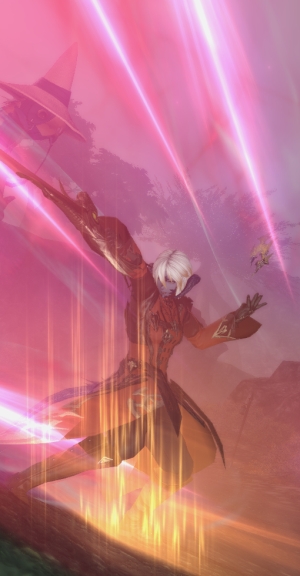 In FFXI, every expansion had a largely separate story from every other expansion. The sole exception is Rise of the Zilaart, which more or less tied up the base game story… but it also expanded the nation stories, so it split the difference. But FFXIV doesn’t have that same structure; it brings us to many points, but always ties into the same central narrative.

There have been two antagonists running through the game from start to the present. The Ascians and the Empire. We can possibly deal with one before the other, but from a dramatic standpoint it makes more sense to keep them together, to send us exploring into the depths of the Empire only when we’re ready to demolish both threats utterly. Already we’ve witnessed three of the Ascians meet their ends, and we already have good reason to imagine that Meracydia may have secrets lying within that could help bring more powerful weaponry to bear against them.

And it sets up the perfect final confrontation against the Empire and the Ascians as one, within the heart of the Garlean Empire. All natural and organic along the way.

Obviously, this is far from certain; it’s an educated guess based on what we have seen so far. All of the pieces fit, but that’s not an assurance that it’s all going to go down as predicted. It’s entirely possible that next year will see the announcement of a trip into the heart of the Empire and taking them down early, and then we’ll gear up for a final confrontation down in Meracydia in the distant future. But my guess is that we’ve had things set up long enough that we’ll be seeing all the triggers get reliably pulled, and I’d bet decent money on the overall structure being fairly well in place.

And what then? Well, then we pop in the second disc, obviously.

“But what about new jobs?” Heck, I don’t know, it’s way too early to make guesses about that. Or inadvisable, at least. We’ll know more as we move through the next few patches and see where the story is leading us. If I turn out to be wrong, hey, that’s cool. But then we can all laugh together.

Feedback, as always, is welcome in the comments below or via mail to eliot@massivelyop.com. Next time around, I want to start looking at the year in review, both the good ideas and the not-quite-as-good ones. Some stuff has worked, some stuff hasn’t.

I LOVED THE ARTICLE!!

Damn man I’m a late comer to the last 2 expacs just cuz the game wasn’t able to draw me in like 11 did… But I’m there now I’m hooked… It just sux that when you said there’s at least 3 more big expacs left it kinda means the game is almost half way over :((

I’m just waiting to board Doom train, which is stationed at the top of the tower located at Onokoro, which will take us to the Moon or some other location in space, where we fight Zodiark.

Damnit Eliot, you always do this. You write these engaging articles and now I have to go log into FFXIV. Wasn’t my plan for the the day, but damnit I’m inspired.

I can’t find the article, but someone asked Yoshi about the creation of another MMO (they mentioned the same pattern you do with FFXI) and Yoshi basically said he sees no reason to produce another MMO if FFXIV itself is doing well. So they could follow the same pattern as they did with FFXI or they could keeping kicking out expansions for FFXIV. I guess the question is, what would be the benefit of a new MMO, if FFXIV is already doing the job?

I remember the article as well..

Bree Royce - June 1, 2020
28
NOW STREAMING LIVE ON TWITCH
OFFLINE - SEE YOU NEXT STREAM!
NEXT MOP STREAM
No events to display.

Wisdom of Nym: So, if there is a Final Fantasy XVI…

Frozen Flame is a multiplayer survival RPG in a world constantly...

Population Zero adds the option to play with friends as the...

Life Beyond talks about changes to its tutorial area and brings...