END_OF_DOCUMENT_TOKEN_TO_BE_REPLACED

It’s hard to say whether 2017 was a good year for Final Fantasy XIV.

Sure, on one level it seems obvious. The game launched its second expansion, it continues to drive sales, every financial report shows it doing well, players are happy, content is delivered on a swift and regular schedule, everything seems to be going fine. Yes, the game had a good 2017, it has a pretty good year on each outing. What more needs to be said?

Well, a few things. Because this year also brought out some pretty nasty bits of underlying issues that the game has long had bubbling under the surface, problems that we’ve all known were there but sort of ignored for a long time for various reasons. We’ve got another patch coming around, but the year has shown that as solid and impressive as the title may be (and it is), there’s still room to improve.

First and foremost, it’s important to note that from a strictly expansion-based metric, 2017 was downright great. Stormblood is, at launch, a better expansion than Heavensward was. It clearly benefitted from the lessons learned during the first expansion, and the result was an expansion with a better story, better initial offerings for content, plenty of fun new avenues to explore… good stuff all around, in short. There’s a reason I finished up leveling everything across the board as quickly as I did, after all.

But there were still issues. Starting with the fact that Stormblood had an early access issue that Heavensward didn’t in the form of Raubahn EX.

My supposition here isn’t perfect, but considering that Heavensward had two separate personal instances in the early part of its storytelling, I don’t think it was a result of the instancing alone forming a bottleneck. Remember how for a while stuff had to be gated with regards to entering Susano? My guess is the new feature added that remembers “persistent” emotes like sitting was causing an issue from the Susano fight, and that something had to be recoded around that. Before it was fixed, the instance servers were experiencing major issues from top to bottom.

In short, that little quality-of-life feature wasn’t working right with one fight, and the errors caused by that issue were causing instance servers across the game to catch fire. And this is an issue, albeit not the one that it might seem. Like, that sucked at the time, but it was fixed two days later. It’s not the case now.

It’s not just about time, either. It’s also about the fact that, well, the game’s dungeons are a non-renewable resource so long as there are two difficulty modes. As it stands right now, there is no option for Wanderer’s Palace (Significantly More Hard Mode); each dungeon map gets used twice, but there’s no space or time to remake it again. That’s why the four dungeons from the original pre-relaunch version still haven’t gotten another version.

Of the four-person dungeons in the game, there are only so many not already translated into Hard modes. And some of them, for various reasons, kind of can’t be revisited. You could manage something with stuff like the Keeper of the Lake, but what’s going to come of a trip back through the Vault? How do you justify another run of Baelsar’s Wall? There are limits.

In a practical sense, this means that we wind up with a more robust Expert rotation all around, so it has an up side. But the sheer amount of dungeon work that previous expansions had demanded makes it difficult to keep that up forever. And yet it also means that we wind up getting less, that there are fewer dungeons, and we have to expect slightly less content.

That isn’t “there is something wrong at the heart of the game.” The game is still producing an amazing amount of content at remarkable speeds. But it does speak to the fact that we, as FFXIV players, have been spoiled rotten over the years. As the game evolves more diversity of content, we also have to accept that the work has to be taken out of someplace else.

Oh, and let’s not forget, this is the year when it became clear that this housing situation is untenable. That this cannot stand. Like, this has been a problem for the game for a long while, but for an equally long while it’s been possible to point to something other than the fundamental engine as a problem.

We don’t know what’s happening in 4.2 just yet, but it’s clear that this? Is not working. And what should have been a really great moment for the expansion instead became a series of off-key notes, a disruption, a giant gaping wound that we collectively overlook because the game is really good.

And none of this takes away from the fact that, in terms of actual stuff, this year has been great. Expansion? Great. New jobs? Great. Environments? Great. Dungeons? Great. 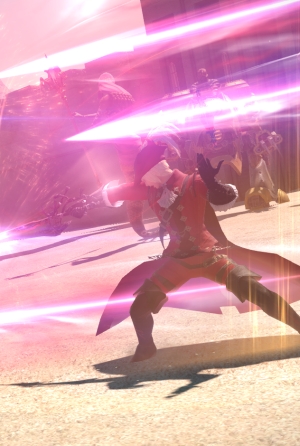 Heck, the new jobs alone deserve a nod for being some of the most elegantly designed bits of gameplay that I’ve seen. Red Mage in particular is a textbook example of how to make a functional melee/caster hybrid in a way I’ve never seen before. What I expected was closer to old-school Enhancement Shaman; what I got was a resolute caster with a lot of fun moment-to-moment decisions that also feels wholly natural getting in and out of range effectively. It’s easily my favorite caster in the game right now, and it almost feels unfair to Samurai that the job works so well because Samurai is a more standard melee job.

Not that Samurai isn’t also a great job with lots of fun parts and a very satisfying rotation. I enjoy the heck out of Samurai. It just feels like less of a surprisingly elegant collection of mechanics.

The long and short of it is that this has been a really good year, but it’s been a really good year that attentive players (i.e. everyone in the game) will see as pointing out some core issues with the game. There’s a lot of great stuff going on, a lot of fun to be had and a lot of well-designed moments. But it also still does have problems, and it’s hard to just ignore them outright. A reminder, then, that the game doing things right is a matter of effort and time, not simply magical pixie dust.

We would all believe that Yoshida had magical pixie dust, I think.

Feedback, as always, is welcome down in the comments or via mail to eliot@massivelyop.com. Next time around, it’s time to start looking to the next year, because this is the way we do things in these parts.

I’ve unfortunately given up on SB way before its time.. The story did not captivate me as much as HW did (at least in the beginning), and i found the zone design (other than Kugane) to be super bland and unimaginative. Samurai was a disappointment for me personally, as it felt too static and rigid. I haven’t tried Red Mage yet, so i can’t comment on that.

The dungeons were fun for the most part though, and i kinda miss doing them. But between the boredom of leveling and having to accept that i’ll never own a house, the motivation simply isn’t there.

Maybe once i’m bored of WoW again i’ll jump back into it..

What a ridiculous article. Im sorry but SB was a zero risk steaming pile of mediocrity.

The ivalace raid has been the only real standout and even that is near obsolete already. The game is a carbon copy of standard ff14 progression. Its downright boring for anyone that plays beyond a extemely casual pace or is dedicated to RPing.

Yoshi told us heavenswards was to be the exapnsion to break the mold and take the game in a unique direction wereas 2.0 was simply getting the foundation set. That turned out to be a complete bust. Then many believed yoshi and team was really ready to flex their muscles and deliver this time around, yet it is the same vapid progression structure with an even less interesting core raid.

Its pandering and it feels lazy. Saying 14 players have been spoiled and that the devs have been putting out amazing amounts of content? Give me a break. This game offers zero incentive to keep going. Everything in 14 has am incredibly short life span in relevancy to the core game. 2.0 and heavensward was either cap tombstones to tackle savage raiding or dont bother with gearing at all since all other content in the game can be done half inebriated with one hand and yeilds rewards that become obsolete in 3 months.

Opinions vary, sure. For me, the gear progression is predictable (i.e. the path) and I’m fine with that. It lets players focus on having fun with the content itself (playing the dungeons, raids, etc.)

I’m afraid I can’t come up with a huge multi-paragraph detailed counter to your statement at the moment. Though I do get where you’re coming from, a little bit.

As someone who takes part in all sorts of things in the game, including gathering, roleplaying, and mini-games like TT, I feel there’s always something for me to do. But that’s what an MMO is supposed to be, right?

Surprisingly, I’m still in my honeymoon phase with this game so I have no real complaints. I see the housing problem as a real issue (I don’t own one) for players so I hope they resolve it soon. Other than that, as you’ve already said…for a subscription based game, you simply cannot get the amount of content (and quality) from any other MMORPG. Lastly, the way the team (Yoshida specifically) relates to the players (feedback, complaints, correcting mistakes, etc.) should be the benchmark for how all companies should treat their customers. The first thing out of his mouth when he knows his team had a misstep is “We are sorry”. Some games can’t even bring themselves to admit they made a mistake, let alone apologize for it.