Even when humanity is on the brink of destruction, even when all hope is lost, it’s good to know that people will still be taking selfies and posting them to Facebook so that all friends and family members won’t forget what they look like or how important they are.

Deekay_plus brings us this Destiny 2 selfie starring… Marilyn Manson? Good to know he’s putting his musical skills to work in the techno-apocalypse. Thumbs up for justice, you scary-looking fellow!

Oh, it only gets weirder from here. Think “Willy Wonka boat ride through the nightmare dream sequence” strange. That’s just how our readers screenshot. 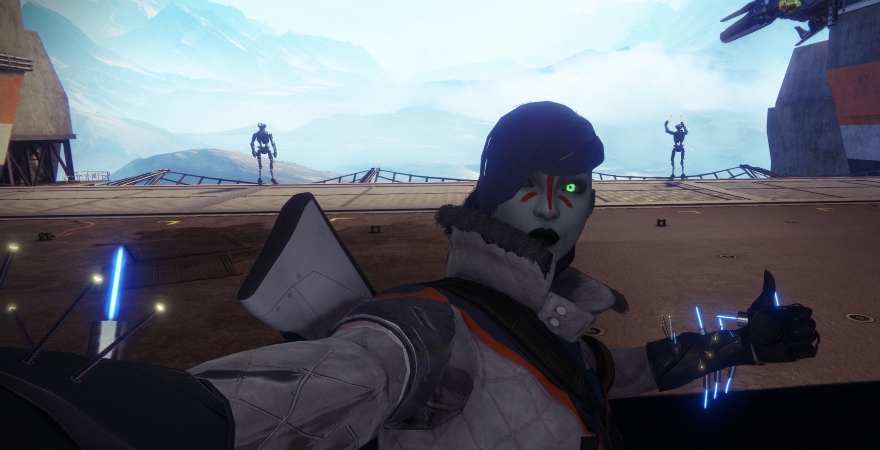 Continuing with the theme of emotes (driven, no doubt, by last week’s screenshot challenge), Rees Racer tells us that it’s OK to play with fire. Sometimes.

“My first experience with the Elder Scrolls games began more than 20 years ago with Daggerfall. Although I was at first rather unimpressed with ESO, I’ve come to very much enjoy the world, as the game has improved quite a lot since it’s launch more than 3 years ago. The consistent content improvements with DLC’s and the recent Morrowind expansion have really solidified it all. One of the more unique emotes is /juggleflame, and although completely unnecessary, is one I use occasionally when I step away for a few minutes. My Bosmer Nightblade apparently has some idle time with the glorious Clockwork City as a backdrop.” 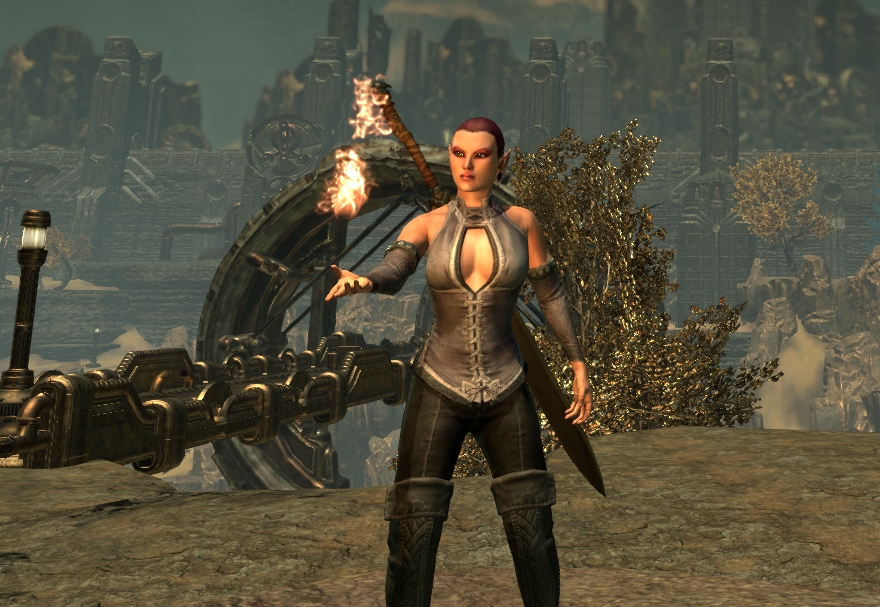 When you want over-the-top emotes, there’s probably no better MMO race to handle them than Final Fantasy XIV’s Lalafell. Vincent sent us several pics of his little guy striking a pose, and just about all of them are either the cutest or most terrifying things you’ve ever seen. 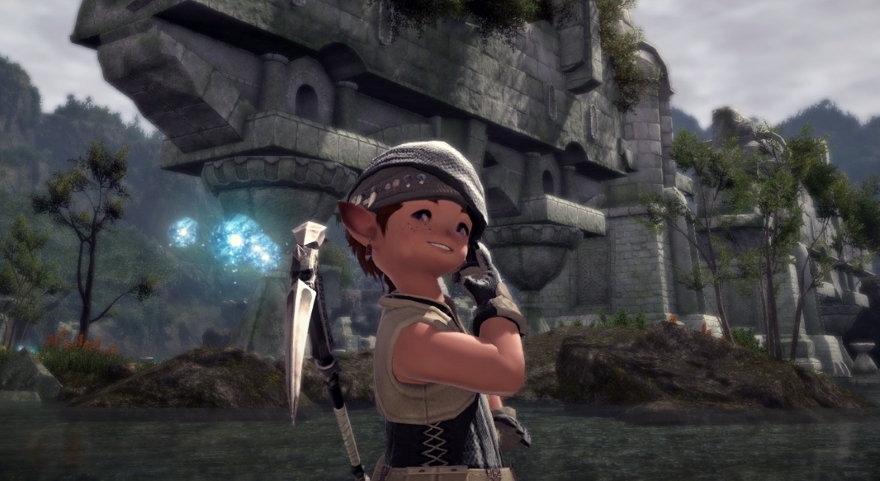 You know how when you have a zit on your face and it feels massive, all you can think about is how everyone must notice and stare at that cherry when they talk to you? I wonder how Azeroth feels currently, now that it has a 500-foot sword sticking out of one of its continents.

Borghive took down the World of Warcraft’s newest raid — presumably single-handedly — and took this picture of the Silithus sword. Nah, Azeroth, it’s not noticeable at all. 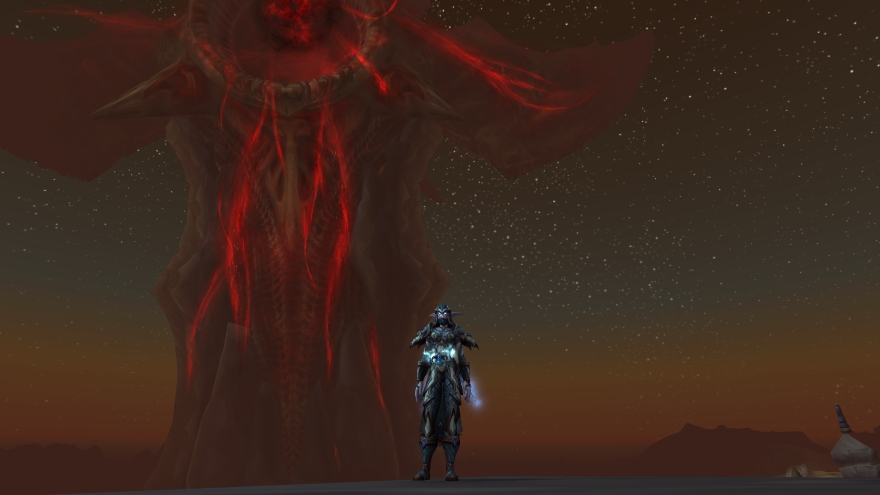 Zyrusticae made a new feathery friend in Blade and Soul: “New update necessitates that I post. Here are some shots that I took. At this point I pretty much only login for a few hours at a time every now and again, completely ignoring progression. Too many games to play, not enough time…” 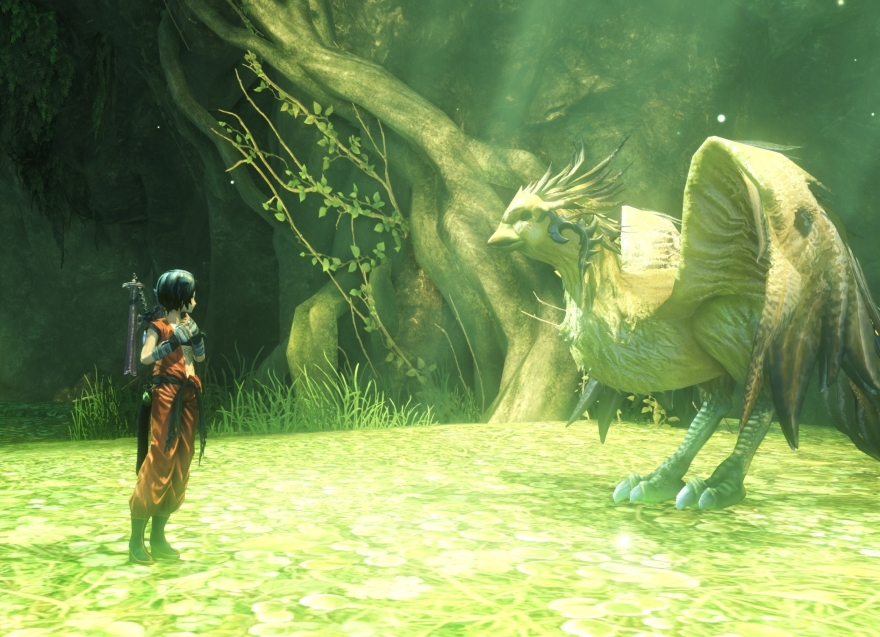 Now that we’re in the thick of the Christmas season, why not take a picture of your favorite MMO holiday scene — or heck, even a wintery zone that hits the spot? Let’s see them in the comments!

Some shots from Q’s Winter Wonderland.

When Christmas is green…

…where my grumpy Goblin Warlock was caught in an inter-dimensional snow bubble from Hell on her way out of her class hall in Dalaran 2.0. :(

When Christmas is white…

…where my nubby Gnome hands grabbed some doctored pic of a “Seasonal” decorated Whitehouse hallway off of IO9. o.O

When Christmas is red…

…where I used a standard standby of my Elin Warrior under a tree from some years ago. Hey, because it’s still the spirit! <3

Addendum: Thought Mr. Schlag would like the second one. :)

Nothing says ingame xmas better than ugly sweaters and ‘funny’ fake reindeer antlers.
That and a well aimed snowball of course.

Ah, the Christmasfication of BnS doesn’t occur until next week with the start of the Christmas Trove event. But in the mean time, I think we can make do. Here are a few holiday inspired screen caps to hold us over.

First, my Force Master Taliee shows she is in the holiday spirit with her seasonal bangle, the thing around her wrist. It is supposed to be a weapon. Lol. Although her choice of attire seems like a miscalculation given the weather.

Second, I found where the Coca Cola Christmas Bears hang out when they aren’t making commercials. They don’t look that friendly though.

Last, this is the first thing you see as you enter the lost city of Valindria in the new expansion. It is beautiful, hopeful, and mysterious. I think those count has holiday treats, don’t you?

Wait, there are Winter zones in B&S? o.O

The Silverfrost Mountains. You are almost there.

It would be easier to count the games that don’t have some sort of holiday themes than the ones that do. However, for those in the Southern Hemisphere (where it’s almost Summer) have to forgive the snowy effects in almost all of them.

In the game that has become more an obsession for me than any game in a decade, Warframe joins in the festivities by allowing us to decorate our landing craft appropriately. In this shot, my favoured frame Octavia dances to celebrate. She is one of the most unique characters in the game, as the players can actually compose the music for her abilities (a bit like a Bard, I suppose), where we can match the beat to enhance the powers. Jingle Bells was not complicated to sort out. Most of the songs in the catalogue from Queen…not so easy. ;)

Wait. Is that a snowman back there? Lol.

While BDO hasn’t exactly flipped the switch on holiday content yet (which gives me time to enjoy it in my other fav MMOs), they did turn on snowfall and holiday decorations. Thus my scenic love affair with BDO has resumed!

That BNS screenshot is lovely. Has a fairy tale look to it.

Well, that describes the scene quite accurately. That magical creature is your guide as you prepare to enter a mysterious city. :)

Gimme all your presents or the reindeer gets lead poisoning. Heh just kidding no reindeer’s were harmed in the taking of these screenshots :p

Love it. I’m oddly glad that you decided to take a go at The Division. It’s one of those games which genuinely surprised me with its quality.

I was expecting a JAS (“Just Another Shooter”) game, and instead, I found a game with interesting missions and story-bits alongside the action. Not to mention those impressive city visuals.

Always nice to get more than one expects from a game,

Yup I enjoy going back every so often but I have to say that the recent 1.8 patch did a lot to reignite my interest. It gave me some enjoyable open world stuff to do at end game after all the story stuff.

Heh I just noticed there is a reindeer in the back ground. Um it is tired and just lying down, um oh heck

thx for the feature justin!

i saw gtao got new hair styles so i had to log in and check em out. and some ofthem are actually good for a change, so got my toon’s do to this cute cut and a cat suit to match. meow!

and a few screens from around star citizen’s 3.0 ptu from the past week. :P

You were always fabulous, Hug! Thanks for the screen :-) (I think I need to put on sunglasses to look at your mount — it’s like the Pride parade and the Chinese New Year parade got together and had a baby hahaha)

Well thank you!
And yes, the mount and dye scheme are all those things :)