END_OF_DOCUMENT_TOKEN_TO_BE_REPLACED
While many games go festive for the holiday season, no one does it quite like Secret World Legends. Cutesy doesn’t quite fit here, but creepy sure does! OK, maybe onsie pajamas and a few other seasonal costumes are cuddly; much more of the celebration, however, has teeth. Welcome to Krampusnacht!

Second only to Samhain, Krampusnacht is a the much anticipated winter holiday in the land of conspiracies and secret societies. And although all the elements of Christmases of yore in The Secret World didn’t make the transition (which is understandable and even expected after Halloween), there’s still a good chunk or reveling to partake in. Funcom has also seriously improved a few aspects of the event compared to SWL’s previous ones. There’s still a kink or two to Krampusnacht, but it’s definitely a holiday worth diving into. And here’s your guide to make the most of it before it leaves on January 2nd, 2018. 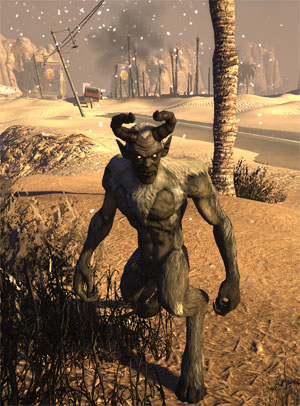 The two main faces of Krampusnacht are Krampus (big surprise, eh?) and Hel. These are the two you are going to want to hang out with to take advantage of the holiday event; there are no missions for the holiday. Krampuses can be found in every zone, whereas Hel is only in two instances. The two are partially intertwined.

When you bump into a Krampus in the wild, you can kill him for a loot drop. (Don’t be shocked, these look like loot drops of TSW days.) This is how you get a shabbily/carelessly/poorly wrapped present that — if the previous loot tables remained — can contain such enticing holiday goodies as second-hand tighty whiteys (for male characters), pre-owned tank top, pink second-hand bloomers (for the lady characters), or ugly socks. He also drops a special item depending on the zone you are in. Keep these! They are essential for facing Hel.

If you do not kill the Krampus before he can open his portal (go ahead and off him once he finishes before he jumps through to get your loot), that’s your ticket to the Niflheim instance! There you get to hear super creepy carols as well as face off against a boss Krampus and even summon Hel. Boss Krampus drops the other items as well as the summon ingredient the Horns of Krampus. He might also still rarely drop a dirty novelty plastic nose and red horns of Krampus, but I haven’t been able to confirm that myself yet. Once you and your group have all the ingredients, you are ready to face Hel.

With all the components collected, you are ready for the big boss. Hiyas Hel! Place the components, which auto filled in your quickslots, on the appropriate spots on the floor and the four pillars and you’ve got yourself a Norse goddess to fight for loot and achievements. The good news is that everyone has a decent chance of beating her; one of the SWL changes has been an equal footing buff. Trust me, the Krampus and Hel fights are both much easier than they were in TSW (just remember to hide behind a pillar when Hel throws up the snowstorm). For those who want more of a challenge, you can dispel the buff for your group and fight her that way instead. 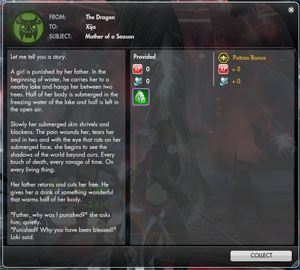 The group instance of Niflheim is only one way to say hi to Hel. You can also hobnob with Super Hel. And here it is a better and fairer experience than in TSW. Just like the previous Secret World Legend’s holidays, the raid happens through the special holiday portal in Agartha. The raid happens every hour, and when one fills up with 40 folks, a new one opens. Once you defeat the boss, you both get the mission and complete the mission (be sure to read the text from all factions if you can!), granting you a special loot bag (which gratefully stacks in your inventory!). There are many cool seasonal items you can acquire from the bags, and all items are tradeable.

Defeating Hel in the raid has an added bonus: It also grants players a 10-minute buff that will allow them to open one daily reward Malevolent Snowflake. And it is in these snowflakes that there are many more cool Christmas goodies.

This is the point where Funcom really improved things. Remember those 14 daily rewards you could get for Samhain and The Whispering Tide? Well toss that out the window: You get 21 days of rewards in Krampusnacht! Also better than previous events, the Malevolent Snowflakes actually stack in your bag, so even if you can’t do a raid on a day you can log in and get your snowflake without filling your bag up.

But even better than that is all of your alts can now claim the event daily rewards! Yes, every single one of your characters can get the pets, mounts, AP, SP, and everything else being given out daily as well as their very own snowflake to open. (That does mean that your alts have to do a raid in order to get the buff to open the snowflakes, but you can save time by doing two alts in one hour as long as your first fight finishes in under 10 minutes. Hint: Log right from the instance after opening your snowflake to skip loading time.)

What scrumptious goodies are hiding in the snowflakes? A pet, a sprint, and lots of festive clothing! Here’s the list (that is being added to each day as I get items): 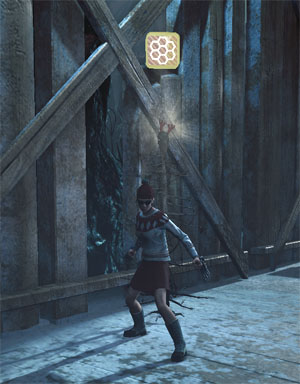 Lore is one of the small disappointments this season. Because I have been going at a relaxed pace and making sure I complete everything in a zone before moving on, I am not yet to Transylvania. And the lore of Krampusnacht 2017 appears to reside in the same exact spots as it did for TSW, which means I have to power through the story in order to be able to get them all.

Every holiday has a special batch of achievements, and if you want to get them all, you might have to plan a little bit; not all are automatic in the course of play.

It is important to note that to throw the snowball at Hel you must do it from the emote menu (press O to open it) and not by typing it in chat. As for the participating in the snowball fights, know that you do not have to initiate one, so if you are unlucky and never get the item you can still complete it. Plenty of folks start the minigame right in Agartha so you’ll have chances.

And if anyone has desperately wanted the penguin onsie as much as I have since TSW, know that it is the reward for The Two Faced Mother. Guess what I will be spending my time doing?