It’s a new year and a new you! Well, probably the old you a few days past the expiration date, but that doesn’t mean you’re completely useless. For example, you probably have enough mental cognition and digital dexterity to log into an MMORPG and create a new character before you dissolve into an unslightly mess of bones and goo.

To celebrate the debut of 2018, the Massively OP legion is out in force to create new characters with all sorts of crazy resolutions!

First up is CapnLan: “My first character creation for the new year is technically an old one. I recovered my old FFXIV character from 1.0 but they had me run him through the new character creator when I logged in for the first time. I touched him up a bit with some new options and went for a stroll around Ul’dah. Here’s a quick shot I took of him with all his hilariously outdated 1.0 gear in front of the New Year decorations on the main street.” 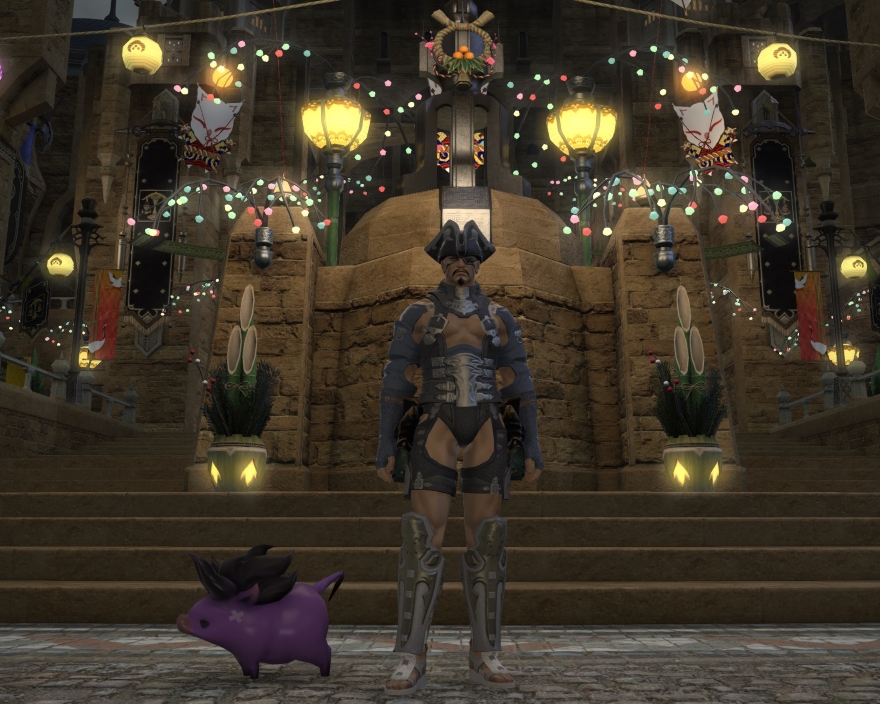 Or are you looking to the stars this year? Not a terrible idea to go exploring into the unknown and then get stranded without gas on a strange and terrible world. Speaking of which, has anyone seen Mysecretid?

“Life under alien skies,” he shared. “A postcard from the unexplored frontier of No Man’s Sky.” 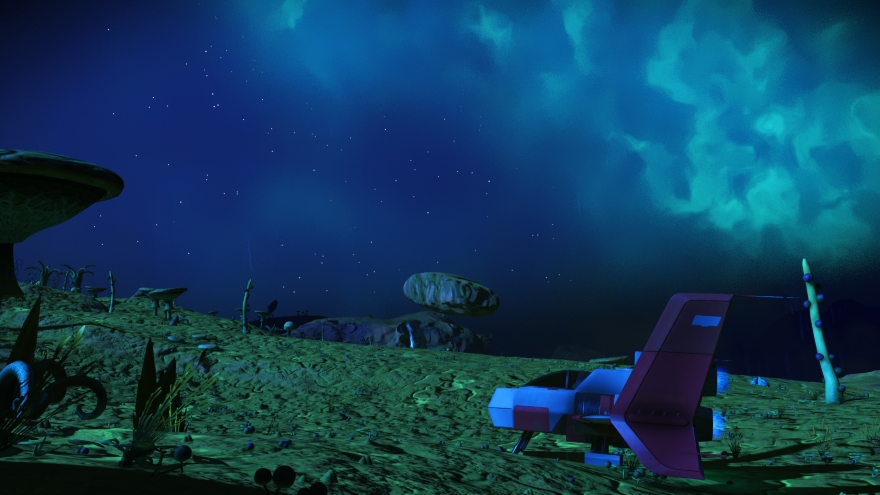 “Kugane is an amazing port in FFXIV,” said Vincent. “I think the world builders did a fantastic job with the city and at night, it really comes alive. Thanks to a little bottle of fantasia, you can change your race/sex at any time so I decided that this little guy will be by new toon for 2018.” 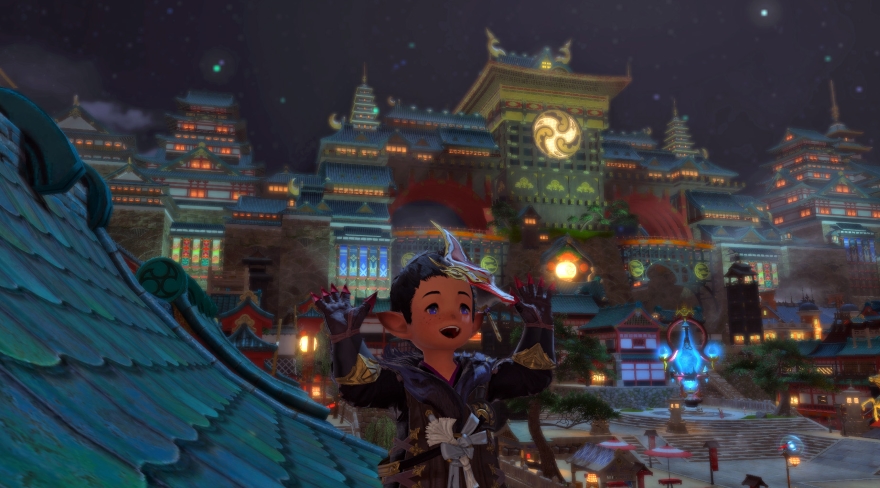 Skorry had this pic for us: “I want to post one of my favorite screenshots from the past year: My Mesmer Awilde flanked by a pair of fellow Elonians in Guild Wars 2. To me, Anet producing African faces and hairstyles for Path of Fire was the biggest MMO story of the year. We all put a bit of ourselves into our characters. For African-Americans and others of African descent to now have their own face and hair options, it’s huge. Representation matters. It still warms my shriveled old man heart whenever I see an Elonian PC out and about in Tyria.” 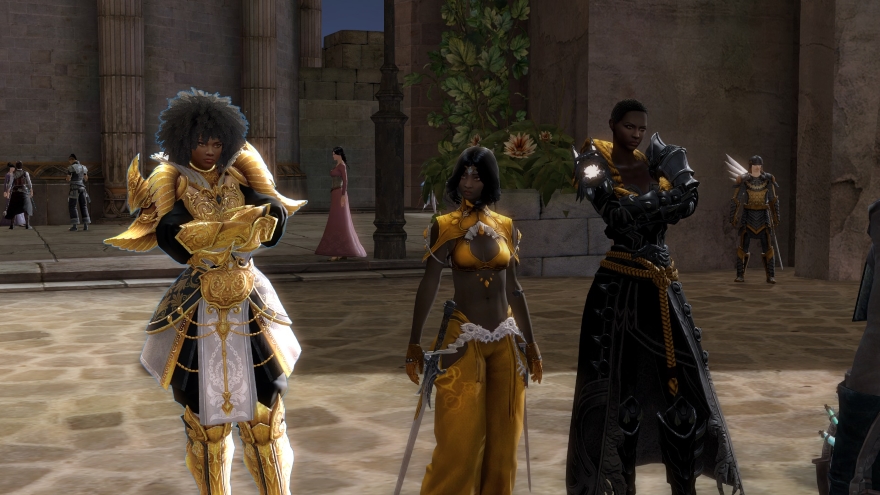 Last up with our new character parade is JonBuck, who is defying all rules of common sense when it comes to dressing up for intense combat by wearing something that looks more appropriate for a spring formal.

“I decided to try Blade & Soul again,” he said. “Here’s my fresh character, a Gunslinger.” 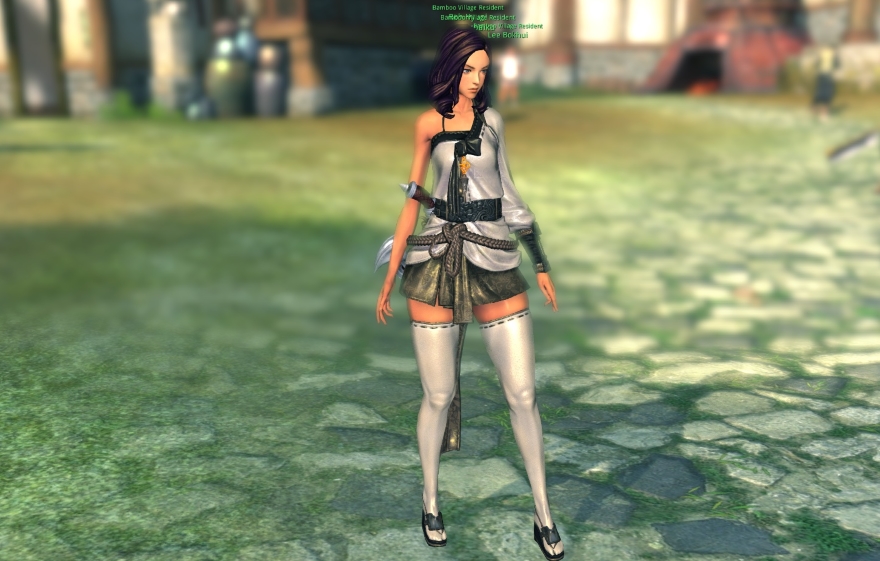 You know what you look like you need right now? A hearty bowl of screenshot challenge to fill your belly and occupy your time! This week, I want to see pictures of striking cutscene images from your MMO. What cool story moments have you captured?

Mysecretid is still lost in space this week.

He sends word, however, that “I totally, totally meant to do that! I am a leaf on the wind, dammit!” along with this pic of (ahem) a rather unorthodox starship landing in No Man’s Sky.

He also thanks Mr. Justin for the feature, and promises that if he should discover any cutscene screenshots worthy of this week’s One Shots challenge, he will forward them along. o7

I want all of them dead, very much.

Fair enough. But I would advice you to hold on to that thought for the time being, because…

“…pictures of striking cutscene images from your MMO.”

Always a decent chance for a shot during the energetic Blade & Soul. The Soha and Juwol bar fight is always good fun, and I look forward to it every time I’ve started a new character (as it happens fairly early in the story). Unfortunately, almost any shot of Soha borders on exploitative, but this one captures the mood quite well. I’m glad I saved it…

If your still playing this game, please visit us at Epic MOP, the friendly neighborhood MassivelyOP Clan based in Yura. <3

It just so happens my characters are on Yura. I’ve been tempted to download and start playing again. These sorts of things go in cycles for me. I think I’ve several characters from the 20’s to mid-30’s in level…so not terribly advanced, I’m afraid.

Whenever you are ready, I’ll send Mr. rafael over with the paper work. :)

If you haven’t tried World of Warships, it’s free and a lot of fun. Great graphics, too.

And this one is just for you…
You’ve gone on for so long about World of Warplanes whilst I’ve always insisted War Thunder is the better iteration.
Well, since WoWP launched the 2.0 version, it is much, MUCH improved.
I’ve been having a really good time of it lately.
So, in your honour…

WT had nice features for sure. I just thought WoWP had better graphics and was more historically accurate. Having to “earn” insignia, as if any pilot ever went into combat without it, was plain silly.

Striking cut scenes? Hmm…Stormblood was full of harrowing cut scenes, but Zeno’s attack on Rhalgr’s Reach was pretty gut wrenching. Thankfully, in FFXIV you can replay the MSQ cut-scenes and I was able to grab this shot of Y’shtola trying to deflect an attack from Zenos…

New adventures in strange, new lands— at least for me. I’m a little late to this expansion, but it hasn’t diminished the fun of it.

Edit: Oops.. the second image is from Iron Pine Peak, so not so new. Still, it’s quite pretty. :)

Been playing a lot of Witcher 3 latey, (again), and playing around with NVidia’s Ansel. It’s really easy to use and you can get all kinds of looks. I hope more games start utilizing it.

I’ve played Megadestroyer in Guild Wars 2 about a hundred times, and I never saw this happen before. Such a gorgeous effect most people will never see.

This is what the dictionary refers to as an “ouchie”, no doubt! Thanks for the pic!

A striking cut scene you say?
Well, there is definitely striking and obviously some very serious cutting happening in this scene.
Anyway meet my new Imperial character in ESO who, not quite unlike the Romans his race took some inspiration on, seems to think stabbing and assassination are perfectly valid diplomatic tools.

Striking cut scenes? That’s the challenge? Ah, well, you’ve come to the right place when it comes to BnS.

So, there are some amazing cutscenes that include death of fave and not so fave NPCs. Amazing vids of scenery, flying galleons, dramatic entrances, introductions, and more.

BUT, for right now, I choose one of my new screen caps from a cutscene on the way to BnS new land mass Solak. It captures what I like about the game: a free fall of color and action with so many questions besides. :) Oh, and outfits too.

I finally finished Act 1 of the BnS storyline last night.

Oh cool! Had a showdown with Jinsoyun? Didn’t quite go as expected, right. Lol.

Yes. She practically cut me in half.

is that the part where she tosses you up in the air and turns you into a sushi roll? o.O

Oh, I get to toss Bunyang in to the Void. That’s something to look for…

“That’s not being nice to your students, Uta!”

…Yeah, I know. My pigtails should be showing a degree of more patience. It’s the Hongmoon way after all. :(

Bree Royce - June 1, 2020
50
NOW STREAMING LIVE ON TWITCH
OFFLINE - SEE YOU NEXT STREAM!
NEXT MOP STREAM
No events to display.

Choose My Adventure: Star Trek Online and my hunger for a...