Things looked very bleak for SkySaga and its parent company Radiant Worlds last August when the upcoming multiplayer game shut down production following Smilegate’s decision to pull out as publisher and leave Radiant without funds to finish the game. However, hope for the studio blossomed following a statement today by UK media developer and publisher Rebellion, in which it was announced that the company had acquired Radiant Worlds for an undisclosed sum.

The publisher said that Radiant Worlds will now become a sister studio called Rebellion Warwick and “will immediately transition on to current projects including the 1930s co-op adventure Strange Brigade.”

Unfortunately, this acquisition did not include SkySaga, so don’t put too much stock in a resurrection. “As much as we loved working on SkySaga, the game belongs to Smilegate, so any future development plans would be from them, not us,” Radiant tweeted. 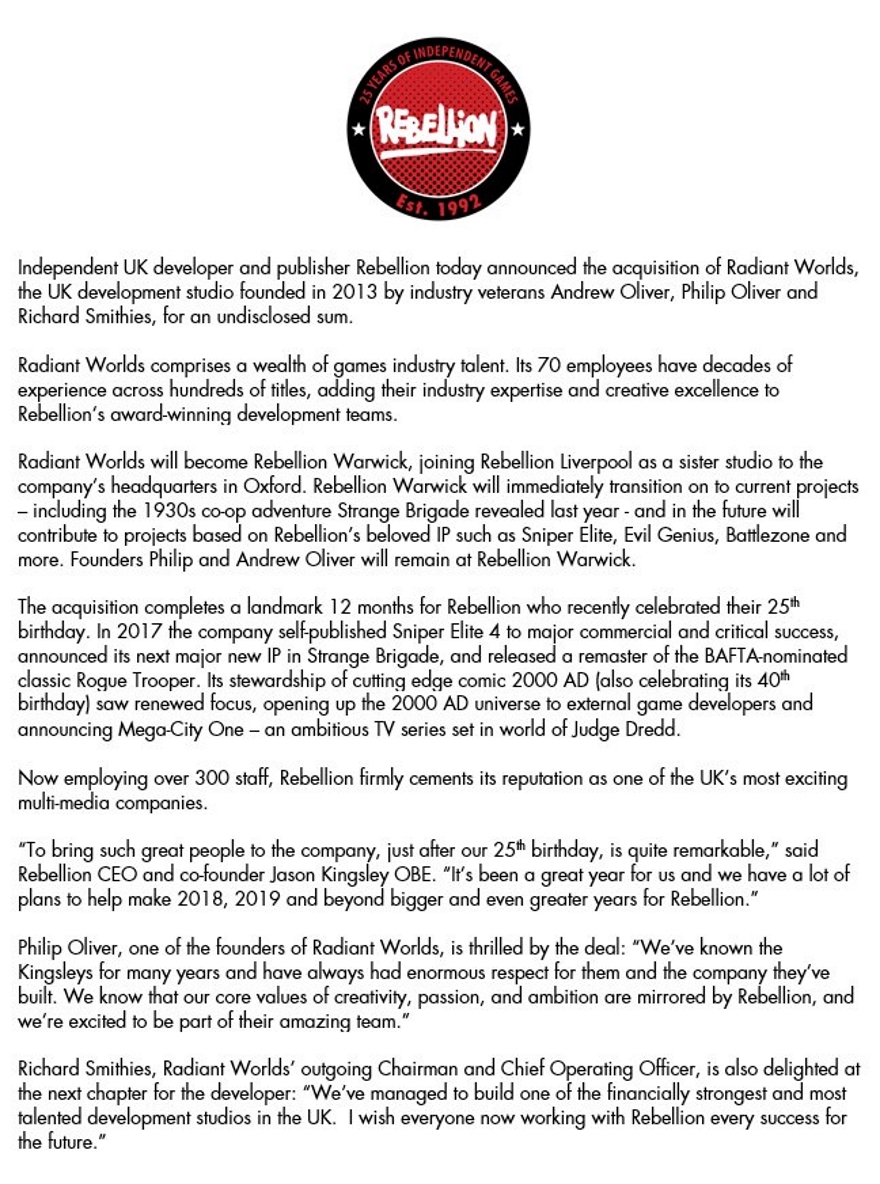 Source: Twitter. Thanks Boom and Brazen, which is totally going to be the name of our next band.

I really hope they will continue to work on it and release it. Quite an amazing and unique game. I don’t want to see it gone. Just make it buy to play if you’re worried about making money with this game. I would definitely buy it.

The early access games that become popular have a solid core gameplay loop when they go public and clear direction for the future development, even if some elements change or new things are added. Skysaga lacked that core loop for a long time and never seemed to settle on what it was aiming to be at the end of it all.

They are an extremely talented studio, but perhaps they just need to keep things under cover until they know what they are doing, rather than experimenting in the public eye.

And here we go from an insanely cuddly, sweet and creative and cooperative game which had very odd ideas about monetization (or rather not monetization …) and suffered mostly from a haphazard wild change of basic gameplay elements as if someone was rapid prototyping without an idea what they wanted – to a combat game.
Yay. -.-
I still click on the Skysaga splash screen page every so often hoping Smilegate got their act together. :(

I like to keep checking the website as well. The fact that it is still up does give me hope for the game’s return, if only a little.

It was a fantastic world to build in, with lots of potential to create interactive and beautifully decorated islands.

I was aware of Rebellion only as a book publisher – they acquired the quality paperback genre publisher Solaris some years ago.

Fully supporting these guys and what they are trying to do, also very proud as they are based just down the road from me here in the UK. Looking forward to see what the future brings but this is really good news :) <3

I played some Sky Saga and I really enjoyed it. It had a lot to offer for those that enjoy its style of game. Even early it had a lot of different blocks and decorations so the future looked bright until this issue. Hopefully they can get the game back on track.

Totally approve of the name of the band! I am happy for the Radiant Worlds people. But I hope Smilegate will eventually sell the SkySaga IP and let it be properly finished. Families need that game.

So the bands agreed, I nominate you for lead vocals :D

LOL that would, no doubt, be a huge mistake! The band would die on its first outing.

One Shots: Rock out in your hideout

The Daily Grind: What do onlookers not understand about your MMO of choice?

The Daily Grind: Which MMO does the creepiest Halloween?

MMO Week in Review: No, LOTRO’s War of Three Peaks is...

The MOP Up: Soulworker fulfills your greatest desire

Destiny 2 provides a peek at changes to weapon types, exotics,...